A Conversation with I, Citizen Author Tony Woodlief (Part 1 of 2)

The State Policy Network executive vice president talks to Michael E. Hartmann about path dependence, his career in conservative policy-oriented nonprofitdom, and whether philanthropy has contributed to the decline of American self-governance. 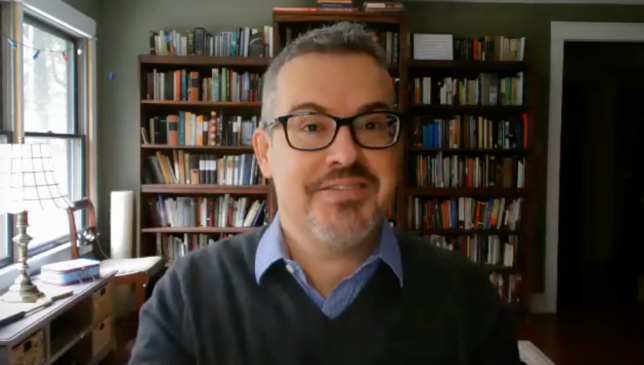 “The gap between what ideological elites running DC believe about the common good, and what everyday Americans believe, explains why the political class has worked so hard to undermine American democracy,” according to Tony Woodlief’s I, Citizen: A Blueprint for Reclaiming American Self-Governance, forthcoming from Encounter Books. “The political elites don’t want We the People to rule, because they don’t trust our judgment and they despise our beliefs. I don’t think they’re very fond of us as people, either.” 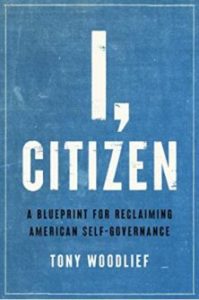 Woodlief is executive vice president of the State Policy Network, before which he worked for the Koch family of companies and was a vice president of the Charles Koch Foundation. An award-winning columnist, he also authored the inspiring Somewhere More Holy: Stories from a Bewildered Father, Stumbling Husband, Reluctant Handyman, and Prodigal Son in 2010.

He was nice enough to join me for a conversation earlier this month from his home in North Carolina. The almost 11-minute video below is the first of two parts of our discussion; the second is here. In the first part, we talk about path dependence, his career in conservative policy-oriented nonprofitdom, and whether philanthropy has contributed to the decline of American self-governance.

Woodlief wrote I, Citizen because “I had this growing frustration at the narrative that is predominant in this country on the left and the right,” he tells me,

that the country is on the verge of civil war, that you’ve got red America and blue America … and they hate each other. The more I thought about it, I thought, well, this doesn’t sound like anybody I know in the real world. I mean, it sounds like people in D.C., but it doesn’t sound like real Americans.

Most Americans are “not ideological wing nuts and they really want more than anything else for government to work and for people to get along,” continues Woodlief, typically winsomely.

What’s fascinating is that the political class—the campaign consultants, donors, activists, the people who are highly invested in winning—those folks are the ones who are hard red and blue, and who hate each other. They’re the ones who are driving that narrative and telling us regular people that we’re the problem in America ….

As for grantmakers being part of the problem that he laments in I, Citizen, “It really comes back to what are you investing in and what’s your underlying purpose. If your purpose is to subvert the will of people in their communities because you don’t like how they vote, or you don’t like their opinions on issues like abortion or policing,” Woodlief says, “it’s not necessarily criminal, probably isn’t criminal, but it’s certainly uncivil and a … transgression on the ethos of the Constitution.”

In the conversation’s second part, Woodlief talks about love of neighbor, Tocqueville, localism, and politics, along with some more about philanthropy and a little big-time Big Ten football.

This article originally appeared in the Giving Review on November 15, 2021.