As her memoir is released, the Holocaust survivor and philanthropy professional talks to Daniel P. Schmidt and Michael E. Hartmann about her family history, education, and the American dream. 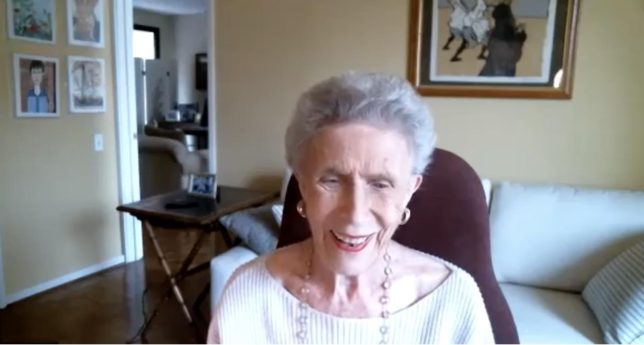 Gisèle Huff was 11 years old, on a ship arriving in New York Harbor at the end of a long trip from her native France, and—with tears of joy in her eyes—she looked up and saw the Statue of Liberty, a gift from France to the United States. In the decades since disembarking from that ship in 1947, her love for America has only grown—but she has great concerns about the country and its future. She’s also got some plans and proposals.

In her newly released memoir Force of Nature: The Remarkable True Story of One Holocaust Survivor’s Resilience, Tenacity, and Purpose, Huff compellingly describes that which preceded her trip to and those decades since her arrival in America, as well as that love for and those concerns about it. 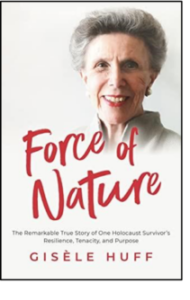 Huff is president of the Gerald Huff Fund for Humanity, which studies and educates policymakers and the public about the benefits of a universal basic income. She founded the Gerald Huff Fund for Humanity after being executive director of the Jaquelin Hume Foundation, which had a strong program interest in education reform and is how we first met her. Earlier in her life, among so many other things, she ran for Congress and served in a development role for a private high school.

Few so well combine the warmth of spirit and cold analytic ability of Huff. She is fun and smart, passionate and principled, the “life of the party” and the spark of many debates.

She was kind enough to join us for a conversation last week. The 18-minute video below is the first of two parts of our discussion; the second is here. In the first part, we talk about her family history, education, and the American dream.

In 1941, when Huff was five years old, “my father and my uncle were taken in a raid on the street” in World War II Paris, “in retribution for the killing of a German soldier,” Huff tells us. “They were sent to a holding camp near Paris, and then they were deported to Auschwitz, where they were both killed in 1942.” Eighteen members of Huff’s family were killed in the Holocaust before the war ended in 1945. “If it weren’t for the American armed forces, I wouldn’t be here to tell you my story, because America saved us,” according to Huff.

“I became the American dream. There’s no way that staying in France, even after the war, that I would ever have reached the places that I reached in America,” she says. “But what makes me very sad, and one of the reasons why I’m” promoting universal basic income, is “because the American dream, in my view, is dead.”

Newly in America and beginning her pursuit of the dream, her first educational experience “was one of the reasons why I internalized the need to transform education,” she says. Speaking no English, she was sent to a sixth-grade class in P.S. 2 in the Bronx ghetto. “There was no teaching, none. Those children were being warehoused, that’s what it was.

“I was in the situation that I couldn’t come to grips with, so my mother got us out of there as soon as she could, which was about 10 months. We moved to a small place in Manhattan,” and she attended Joan of Arc Junior High School. Then, her mother “remarried and we moved to Forest Hills, and I went to Forest Hills High School, which was paradise … just a wonderful place.”

After high school, Huff got married and did not go to college right away. “I started going to college when I was 32,” she tells us. “I went to Hunter College, which was walking distance from where I lived, so it was very easy.

Then, “we settled in Manhattan, my late husband and I.” The financial-services firm for which he worked was doing very well and they were very much enjoying their life. “We were social climbers. … We were hobnobbing” and “spent part of the Summer in East Hampton, which is a playground for the very rich. … I think that being French, I had a certain cachet.”

When the successful firm was sold to American Express, there was quite a windfall for those who worked for it. “So he stopped working. He was 37 years old, and he and we retired,” Huff recounts. “I went to school. I got my Ph.D.” in political philosophy at Columbia University.

“The fact that he wasn’t working was making it difficult” in social situations, and “the fact that I was in another intellectual” space meant that “I couldn’t get involved in conversations with my friends anymore. … We felt like fish out of water.”

Meanwhile, Huff’s and her husband’s parents had all moved to the West Coast, to be near other family members. “So the pull was too strong,” and they moved to San Francisco.

In the conversation’s second part, Huff talks about philanthropy and education reform, the need for reform of philanthropy itself, and the benefits of a universal basic income.

This article first appeared in the Giving Review on August 2, 2022. 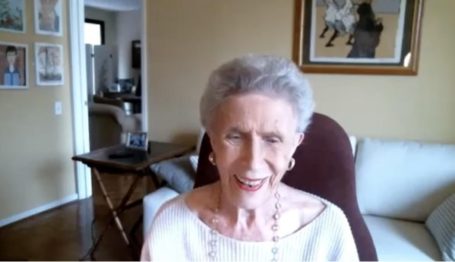