The University of Chicago sociologist talks to Michael E. Hartmann about politics in social life, Presidents Herbert Hoover and Franklin D. Roosevelt, the March of Dimes, and the power of voluntarism.

Many important questions have recently arisen again about the roles of the public and private sectors in securing societal well-being—including the nature and scope of those roles, the extent of authority exercised by those filling them, the degrees to which the sectors can and should interact with each other, and the standards of accountability to which they should be held as they do so.

University of Chicago sociology professor Elisabeth S. Clemens’ comprehensive Civic Gifts: Voluntarism and the Making of the American Nation-State impressively details how all of these questions have been asked, and answered, throughout U.S. history. 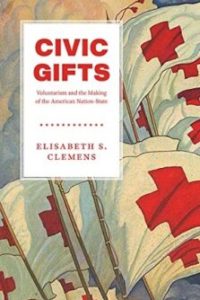 In Civic Gifts, which my Giving Review co-editor Dan Schmidt and I have reviewed, Clemens thoroughly examines how civil society has related to the state, and whether they can stand apart even if they want to do so. She explores whether they—whether we, really—can together develop and sustain a shared sense of nationhood despite all the differences with each local community, state, and the nation as a whole.

Clemens was kind enough to speak with me earlier this month. The 13-and-a-half-minute video below is the first of two parts of our discussion; the second is here. In the first part, we talk about how politics is embedded in social life, Presidents Herbert Hoover and Franklin D. Roosevelt, the March of Dimes, and the power of voluntarism.

Clemens researched and wrote Civic Gifts, she tells me, out of an “orienting commitment to my work as a political sociologist, which is that politics can’t be understood simply by looking at the formal institutions—the presidency, the courts, the Congress”—but “needs to be understood as embedded in social life and as working through organizations [and] associations, activities that are often bracketed as private.”

With the birth and growth of the March of Dimes, which Clemens uses to exemplify much of the thinking in Civic Gifts, “there’s this discovery by the Roosevelt administration of both the social, the financial, the organizational power of volunteerism that really hasn’t been seen as part of the state-building efforts either of the New Deal or of World War II,” she says.

In the conversation’s second part, Clemens talks about the political construction of philanthropy and charity, current strains on that construction, a potential revival of mutual aid, and what it might mean for our us all as a nation.

Watch part 2 of the interview here.

This article originally appeared in the Giving Review on August 23, 2021.