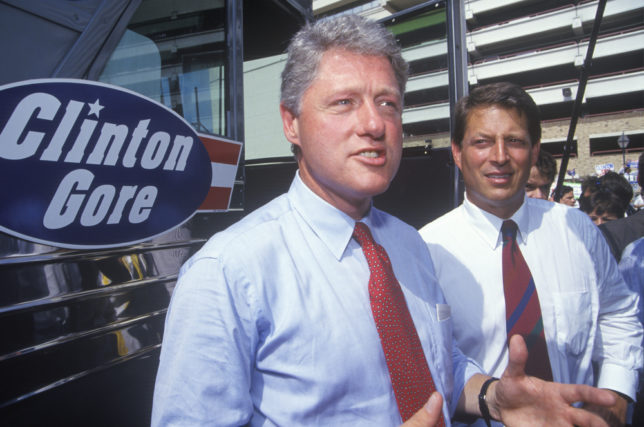 It’s now been 20 years since President Bill Clinton signed the welfare reform law. The bill was one of the most signed in the 1990s, and is a major part of President Clinton’s legacy. So of course there was a great deal of discussion about it.

Washington Post reporter Max Ehrenfreund devoted several articles to analyzing the consequences of welfare reform, including this major one from August. He summarizes the findings of liberals and conservatives, and I’m sure his general conclusions are accurate.

What he found is that the immediate and lasting effect of the reform is that the number of welfare recipients fell by half, from just over 12 million in 1996 to 6.3 million in 2000. A lot of single mothers with high-school educations began to enter the formal labor force, and many of these mothers stayed employed.

However, the welfare state didn’t shrink. The funds spent on directly aiding the poor were redirected into “programs other than welfare, such as child care, college scholarships and programs that promote marriage as a way to prevent poverty.” I’m sure someone has looked at this question, but I bet the number of caseworkers employed at welfare offices has risen at least as fast as the population has, and probably more.

There is a continuing debate over how many Americans there are living in poverty. The official poverty rate has remained relatively constant since 1996, but critics argue that the official rate doesn’t reflect subsidies the poor receive that doesn’t include welfare.

In another article, Ehrenfreund notes how statisticians from the Census Bureau make mistakes. In September, the Census Bureau issued a report saying that American household incomes were rising, except for rural areas, which showed a three percent decline between 2014 and 2015.

A day later, the bureau issued a retraction, saying that data from rural areas in 2014 in the Current Population Survey were “not comparable” to 2015 because the statisticians didn’t readjust the data to account for the steady growth of urban areas, which meant that, by Census definitions, six million Americans who lived in rural areas in 2014 lived in metropolitan areas in 2015. The bureau encouraged researchers to use data from the American Community Survey, which stated that rural incomes rose by 3.2 percent between 2014 and 2015.

Moreover, as the Heritage Foundation’s Robert Rector has repeatedly shown, the poor in America spend more than they say they earn. In this Daily Signal article from September (co-written with Rachel Sheffield) Rector reminds us that the poor spend “$2.40 for every $1 in income the Census says they have,” they live in an apartment or house bigger than the ones non-poor people in France, Germany, or England, three-quarter of the poor have cars, and 11 percent have two or more cars. Statistics from 2009 say that two-thirds of poor Americans have cable or satellite TV and half have computers, but these statistics haven’t been updated for seven years.

There is also the continuing debate about whether or not, as Kathryn Edin and Luke Shaefer claim, that millions of Americans live on less than $2 a day. Manhattan Institute fellow Scott Winship refutes this claim in this paper, where he calculates the number of Americans in “deep poverty” of $2/day or less is less than one hundredth of one percent.

Nonetheless there are a lot of Americans who aren’t working. Ehrenfreund notes in this article that one troubling sign is that the children of single mothers who entered the labor force after the welfare reform of 1996 ended up being single mothers on welfare. He cites a paper by a research team led by University of Kentucky economist James Ziliak, which found that women who were teenagers during the 1996 welfare reform were unable to get out of poverty. He describes a woman named Shavonna Rentie, who was 15 in 1996. She noted how the changes in welfare requirements encouraged her father to go to school and become a mechanic.

But Rentie had four children and isn’t working. She gets food stamps and housing assistance, but gave up on welfare because of requirements that she spent several hours a week volunteering and travelling 15 miles to a welfare office in Tulsa where she had to fill out reams of paperwork. Rentie says that welfare “is another hand pressing you down.”

What I don’t find in Ehrenfreund’s articles is an explanation of how to get people to successfully enter and stay in the labor force. It appears that many welfare offices keep busy (and keep caseworkers employed) by busywork that doesn’t prepare people to become successful employees. It seems to me that one of the reasons a universal basic income seems so enticing is that all the hoops welfare offices currently require recipients to leap through do very little to prepare people for jobs.

The conversation we need to have about welfare–and one that really didn’t happen in 1996–is what strategies are effective in getting people to become productive and employable. The persistence of long-term unemployment shows that the answer to this question is not simple.