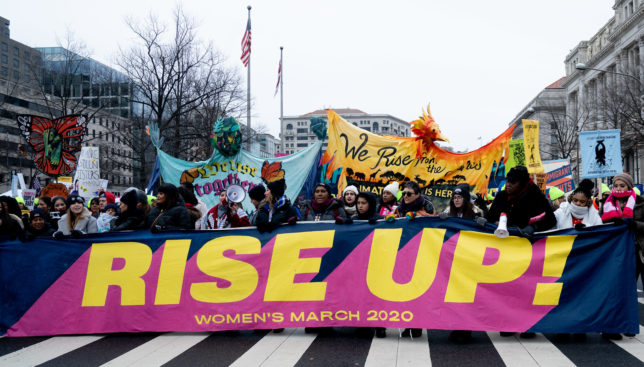 Earlier this month, the Women’s March convened in Washington, DC, and across the country for the third year in a row. The Washington Post reported organizers in the District anticipated three to five thousand marchers, down from the approximately 500,000 who marched on the city in 2017. While support for the Women’s March has waned over the years, the march still boasts about its “brand partners,” which include many household names—many with their own radical politics.

Indeed, Ben & Jerry’s is perhaps the most well-known variant of “woke capital.” On its values page, Ben & Jerry’s claims to be dedicated to racial justice, democracy, GMO labeling, fair trade, climate justice, LGBT equality, banning rBGH, “Get The Dough Out Of Politics,” peace building, and refugees. Ben & Jerry’s also come out in support of reparations to the descendants of African American slaves. Most notably, Ben & Jerry’s endorsed Sen. Bernie Sanders (D-VT) for president, creating two special ice cream flavors dedicated to him, one for the 2016 and one for 2020.

Another big brand partner for the 2020 and 2019 Women’s Marches was Lush, a cosmetics company known mostly for its bath bombs.

In 2017, Lush CEO and cofounder Mark Constantine sat down with U.K. Labour Party leader Jeremy Corbyn, who has called terrorist groups Hamas and Hezbollah “friends.” Lush too has a long history of agitating for Palestinian extremism. In 2011, The Forward reported Lush was supporting the group OneWorld, which created a song, “Freedom for Palestine,” with lyrics attacking Israel for “crime against humanity.” At the time, a statement on Lush’s website reportedly stated, “The catastrophe facing the Palestinian people is one of the defining global justice issues of our time” and “If OneWorld are successful at getting the song in the charts, the mainstream media will find it hard to ignore it or censor its message.” In 2016, Quartz reported that Lush gave money to London Palestine Action, among other left-wing causes.

On social media, Lush has repeatedly shared a post claiming that Israel controls access to water in Palestine. In 2018, Lush U.K. wrote a biography of an organization shortlisted for its spring prize, beginning the entry by claiming the group was “Regenerating Palestine” in “Israeli-occupied Palestine.” In 2019, Lush shared on various social media platforms, in various languages, that “Palestine’s water supplies have been controlled by Israel.” A featured story on Lush’s U.K. website about almond oil mentions almond oil comes from both Israel and Palestine, but the bolded introductory paragraph singles out Palestine: “Enabling Palestinian farmers to earn a sustainable livelihood and the communities caught in conflict to connect with the outside world.” The summary also mentions the oil is a form of “peaceful resistance to the Israeli occupation.”

On top of its anti-Israel advocacy, the American version of Lush has a “Charity Pot program” that supports many different organizations as partners, such as People’s Climate Arts, which makes artwork for “mass demonstrations and actions”; Garden State Equality Education Fund, which Lush helps by providing “printed materials” to the anti-bullying and anti-gay conversion therapy organization, the Prison Yoga Project; the anti-“privilege” Beyond Boarding organization dedicated to social justice in snowboarding; and many, many others. On its US website, Lush brags that since 2007, it has donated more than $33 million to various charities around the world because of its Charity Pot program. Additionally, Lush awards £20,000 each to various groups every year, including Police Spies Out of Lives, which seeks to expose alleged abuses by undercover British police officers who infiltrated social justice and environmentalist groups, and Reprieve, a group dedicated to closing down Guantanamo Bay.

Lush also allows organizations to “use” Lush’s platform to advocate for their own issues. In 2016, Lush supported accepting more refugees with its Refugees Welcome campaign, raised $300,000 for groups in Lush’s Friendship Fund from sales of its Hand of Friendship Soap. Lush also created a 31 States Bath Bomb to end the death penalty.

By far the most controversial bath product that Lush was the Guantanamo Garden “ballistic,” which contained images of Binyam Mohamed and Al-Jazeera journalist Sami Al Haj, two men detained at Guantanamo Bay. Money raised from sales of the bath “ballistic” went to Reprieve.

Johnnie Walker was notably absent in 2020 list of supporters, after it received a special thanks in 2019. In 2019, the Women’s March advertised that supporters could download and print artwork from the Jane Walker website to use during the march. The official Johnnie Walker brand also advertised the signs on its social media. Johnnie Walker also reportedly handed out complimentary signs to marchers.