The Woes of the Western Sage Grouse: Environmental Canary in the Coal Mine 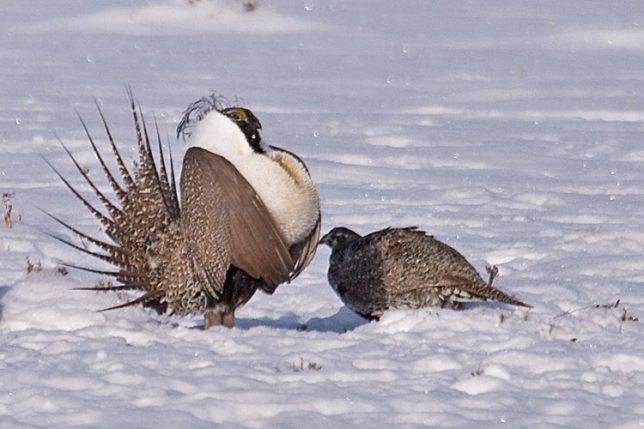 The Woes of the Western Sage Grouse (Full Series)
Environmental Canary in the Coal Mine | Party Divisions | Weaponizing the Endangered Species Act | Is Reform on the Way?

Partisan disagreement about listing the Bi-State and greater sage grouse in western states as an endangered species sparked costly lawsuits and strained partnerships between local industries, states, and the federal government. This is the latest indicator that Congress needs to act to prevent regulatory overreach by executive agencies and to reform the Endangered Species Act to limit radical environmentalists’ ability to stick taxpayers with bills for expensive and needless litigation.

Ask environmental activists who have filed litigation under the Endangered Species Act (ESA) what they find so lacking in local conservation efforts and you will get some creative answers that have been used to justify taxpayer-funded court actions.

If you happen to speak with Erik Molvar, the executive director of Western Watersheds Project—one of several nonprofit environmental advocacy groups based in the western U.S. that make frequent use of the ESA—he might acknowledge that state-level initiatives have met with quantifiable success. But in response to further inquiry, Molvar will then proceed to explain why there is no substitute for federal litigation: In the event of a natural disaster, he says, such as an extreme weather condition or disease, the main population center of species could be wiped out. Therefore, Molvar and his fellow green activists, feel a compulsive need to hit the litigation button again and again to agitate for an endangerment listing even when species population trendlines point to recovery.

But what the lawsuits have actually done to advance the cause of conservation is not clear since only a small percentage of species have ever been delisted. What is clear is that U.S. taxpayers often foot the bill for the substantial legal fees the green groups pay to their attorneys thanks to a key provision of the Endangered Species Act, which has become one of the most controversial laws in the land since its passage in 1973.

The failures attached to the ESA’s Big Government approach to conservation are legion. But the incessant efforts on the part of green groups to list a chickenlike bird known as the sage grouse offer an opportunity to focus public attention on the need to reform this law.

In 2010, a coalition of radical environmentalists filed suit against the U.S. Fish and Wildlife Service calling for the greater sage grouse and the Bi-State sage grouse to be listed as either threatened or endangered. They never looked back.

What is the greater sage grouse and how does it differ from the Bi-State sage grouse? The brightly-colored, chubby, ground-dwelling bird with a small head and long tail derives its name from the habitat it occupies out west—namely sagebrush. While the bird itself is iconic, environmental scientists pay special attention to the sage grouse because its health and survival are contingent on its habitat. A healthy sage grouse population is indicative of a healthy sagebrush landscape.

The sage grouse has assumed a heightened importance during the Trump administration as it figures prominently in deregulation efforts. The population range for the greater sage grouse cuts a wide swath across much of the American West.

The greater sage grouse and its close cousins have a story to tell about the transition from the Obama administration to the Trump administration. When the history is written about the success or failure of Team Trump’s efforts to corral the federal bureaucracy and alleviate regulatory burdens, the sage grouse will be a big part of that story.

Green groups seemingly experienced a significant setback in September 2015. Then-interior secretary under President Obama, Sally Jewell announced that U.S. Fish and Wildlife Service (USFWS) would not list the greater sage grouse as endangered. Because of the heavy lifting done by state officials and private landowners, she explained, local and state-level conservation efforts had met with considerable success:

This is truly a historic effort—one that represents extraordinary collaboration across the American West . . . It demonstrates that the Endangered Species Act is an effective and flexible tool and a critical catalyst for conservation—ensuring that future generations can enjoy the diversity of wildlife that we do today. The epic conservation effort will benefit westerners and hundreds of species that call this iconic landscape home, while giving states, businesses and communities the certainty they need to plan for sustainable economic development.

While Jewell stopped short of saying that federal involvement was not necessary, she praised collaborative efforts between her department and state officials. After experiencing a sharp decline in its population numbers over the past several decades, the greater sage grouse now “remain relatively abundant and well-distributed across the species’ 173-million-acre range,” USFWS agents concluded.

That didn’t sit well with Molvar and friends who favor stricter land use rules coupled with an Endangered Species Act listing. In response to the decision not to list the species, Molvar said:The sage grouse faces huge problems from industrial development and livestock grazing across the West, and now the Interior Department seems to be squandering a major opportunity to put science before politics and solve these problems.…Strong, science-based plans could have neutralized the serious threats that sage grouse are facing, but instead we have weak plans that cannot justify the decision to deny Endangered Species Act protections.

That’s one side of the argument: Anytime the greens are denied an opportunity to file suit, they balk.  But industry representatives who have a personal stake in the sage grouse habitat saw skullduggery at work in the waning days of the Obama administration. The Department of the Interior’s Bureau of Land Management and the Agriculture Department’s U.S. Forest Service finalized 15 land use plans in September 2015, all issued the same day Fish and Wildlife declined to list the species as either threatened or endangered. Groups like the Colorado-based Western Energy Alliance view the land use plans as counterproductive to conservation and overly burdensome and restrictive toward oil and gas development.

Ten of the 11 states that are home to sage grouse will be affected by the approved land-use plans. Washington State’s sage grouse population is concentrated on private land where federal regulations are not applicable.

The Interior Department released a report in 2015 that examined population trends for the bird and identified some encouraging trends. The report found that the long-term average annual rate of decline for the species had moved from 3.1 percent (measuring from 1965-2007) to 1.4 percent (measuring from 1985-2007). The report also found that the population in parts of Nevada and Utah actually increased. State officials who have filed suit challenging the federal land use plans have their own facts and figures that point to stabilizing and even rising population figures for the greater sage grouse.

Unfortunately, there is no way to precisely gauge the bird’s current population. The figures most frequently cited by Fish and Wildlife based on recent surveys estimate that there are anywhere from 200,000 to 500,000 greater sage grouse residing across 11 western states.

Fish and Wildlife officials acknowledge on the agency’s website that there is no set standard procedure for counting the birds:

Sage-grouse are especially difficult to count because of their large range, camouflage coloring and ability to hide in sagebrush. While there is a keen interest in population sizes, there is no effective and universally accepted way to estimate populations. Instead, state fish and wildlife agencies count the most visible population segment of the species: male sage-grouse displaying on communal mating sites, called leks, during mating season. There is no systematic count of females, sub-adults, or non-displaying males.

Since the Obama administration rolled out the sage grouse land use regulations, environmental groups and industry groups have predictably lined up on opposite sites.

In the next installment of the Woes of the Western Sage Grouse, learn about how inter-party divisions have emerged in the wake of the sage grouse’s controversial status.