The Woes of the Western Sage Grouse: Is Reform on the Way? 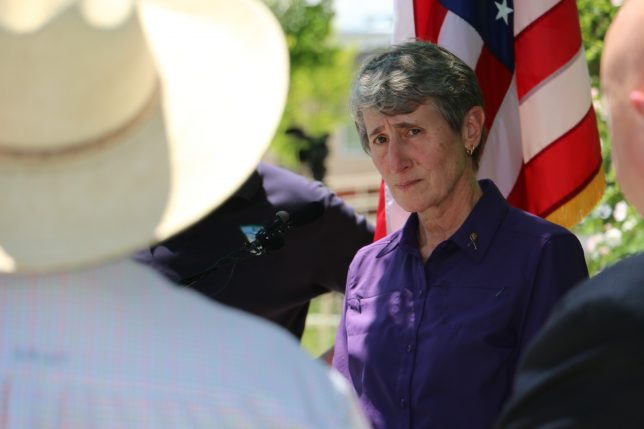 In April 2015, Interior Secretary Jewell sent environmental groups into a tailspin during a public announcement in Reno, Nevada, “to celebrate an extensive and long-term conservation partnership on behalf of the bi-state greater sage-grouse population.” Credit: Bureau of Land Management Oregon and Washington. License: https://goo.gl/u2qmG6.
by Kevin Mooney

The Woes of the Western Sage Grouse (Full Series)
Environmental Canary in the Coal Mine | Party Divisions | Weaponizing the Endangered Species Act | Is Reform on the Way?

Summary: Partisan disagreement about listing the Bi-State and greater sage grouse in western states as an endangered species sparked costly lawsuits and strained partnerships between local industries, states, and the federal government. This is the latest indicator that Congress needs to act to prevent regulatory overreach by executive agencies and to reform the Endangered Species Act to limit radical environmentalists’ ability to stick taxpayers with bills for expensive and needless litigation.

Interior Secretary Ryan Zinke now appears poised to move forward with regulatory reforms to the land use plans that could provide more latitude for natural resource development and ranching. The department’s Sage Grouse Review Team has produced a report that includes input from state officials who have been impacted by the regulations. In May, Zinke’s Bureau of Land Management published a “draft environmental impact analyses” of proposed changes to “resource management plans” in Colorado, Idaho, Oregon, Nevada, Utah, Wyoming, and part of California. The objective of these proposed changes is “to better align plans for managing Greater Sage-Grouse habitat on federal lands with state plans,” a press release from Interior explained.

Since coming into office, Zinke’s team has made it clear that they would like to open up more sagebrush habitats to energy development. How far Zinke gets in the face of rabid opposition from environmental groups is an open question. But there’s another option that may prove to be coup de grace against administrative overreach.

“We the People” Rise Against Administrative Overreach

The Pacific Legal Foundation (PLF), a nonprofit, public interest law firm headquartered in Sacramento, California, that advocates on behalf of “private property rights, individual liberty, free enterprise, limited government, and a balanced approach to environmental protection,” has joined with the Heritage Foundation and other key partners to educate lawmakers and the public about the benefits of the Congressional Review Act (CRA). This is being done through an initiative titled “Red Tape Rollback.”

The Congressional Review Act first went into effect under House Speaker Newt Gingrich in March 1996. The law stipulates that regulatory agencies must send rules to both houses of Congress and the Government Accountability Office before the rule can go into effect.

Congress then has the authority to schedule up-or-down votes with simple majorities on resolutions of disapproval for any rule the members want to strike down using fast-track procedures. During the first 60 legislative days after a rule is received, the CRA allows Congress to vote on those resolutions of disapproval to overturn rules without a Senate filibuster and with limits on the amount of time the Senate can take to debate.

A member of the House and Senate each must first introduce a joint resolution and the majority leader has to bring it to the floor. Both the House and the Senate versions would be subject to a simple majority vote if acted upon within the 60-day legislative window. Resolutions that pass are sent to the president for his signature or veto. If the president signs, this means the rule is voided and any “substantially similar” rule cannot be adopted in the absence of a new law authorizing it. The Obama administration’s land use rules, which were implemented with the stated purpose of protecting the greater sage grouse, are among the many Obama-era rules the Trump administration could submit for review.

Todd Gaziano, chief of legal policy and strategic research for the Pacific Legal Foundation, argues that the sagebrush land use rules are not lawfully in effect and cannot be lawfully implemented since they were never submitted for congressional review.

In April, the public interest firm filed suit against the Interior Department and the Agriculture Department to prevent enforcement of the sage grouse land use rules until they are vetted by Congress. Jonathan Wood, PLF’s lead attorney in the case said in a statement:

There is no excuse for bureaucrats—who would throw the book at you if you failed to follow their rules—to ignore the rules that Congress has imposed on them . . . Unelected bureaucrats should not be able to rule us without first submitting those rules to our elected representatives.

PLF represents a cattle ranching operation in Oakley, Idaho, that could be subjected to federal restrictions on its grazing operations once the sage grouse rules are fully implemented. According to Wood:

Our clients are already experiencing the effects of sage grouse rules—last year the Forest Service sent biologists out to study their allotment and grazing . . . Based on that study, the allotment has been identified as valuable habitat for the sage grouse. Consequently, the Forest Service has warned them that restrictions are coming, although they haven’t been announced yet.

In the end, it may be “We the People” who rise up to restore constitutional checks and balances against administrative overreach; who make it possible to strike a balance between responsible natural resource development that average Americans depend upon for their livelihood, and local conservation efforts that allow western states to chart their own destiny.