Who Is Backing Niskanen’s Bet on Climate Doom? 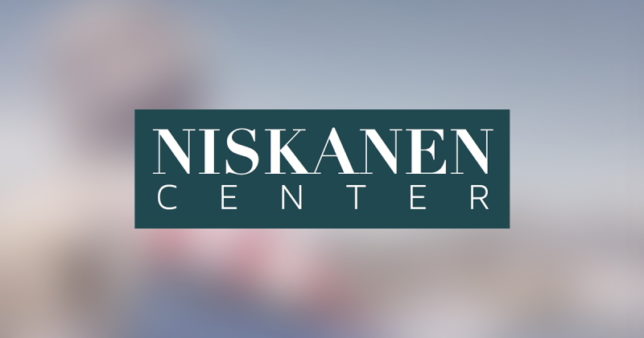 Last Tuesday the libertarian-leaning Niskanen Center released an election projection showing a 99.5 percent probability of victory for Democratic nominee Joe Biden. That works out to just a 1 in 199 chance that President Donald Trump wins re-election: 99.5/0.5 = 199.

Statistical hyperbole may be a Niskanen specialty. In addition to election prognostication the think tank also dispenses policy advice based on climate change models. This leads them to project that “immediate decarbonization” (i.e., “immediately” getting rid of most of the fuels that power modern industrial civilization) is the most responsible policy goal they can recommend.

Don’t bet your money or your economy on Niskanen’s projections.

The easiest way to put the long election odds from “Casino Niskanen” in perspective is to convert them to the money lines used in sports gambling. Imagine a $100 bet. If someone risks that $100 on Trump to win, their payoff on Niskanen odds would be $19,900. Conversely, Biden-to-win bettors must risk $19,900 to win the measly $100. The hypothetical (though not literal) Niskanen line would be represented as Trump (+19,900) and Biden (–19,900).

Reasonable? Not to Nate Silver, the well-regarded election odds guru who runs FiveThirtyEight.com. In a Thursday Twitter post, he denounced Niskanen for “bad math” and “misinforming people.” At the time, Silver’s regularly updated election projection was projecting a 76 percent probability for a Biden win versus 24 percent for Trump.

In other words, Silver pegged Trump’s 24 percent probability as a +317 on the money line—the sort of underdog that frequently beats the odds. The Saturday afternoon before this dispute erupted, two college football teams facing longer odds both won their games. Similarly, Silver’s final probability in 2016 for Hillary Clinton was 72 percent, leaving lots of room (Trump +257) for the narrow upset that occurred. (Trump’s win probability average with actual offshore casinos on September 18 was 46.3 percent, a slight money line underdog of +160).

Thus, DO NOT bet against Silver’s election numbers. But if you want to bet on Trump to win, then grab $100 and see if the suckers at Niskanen really want to risk $19,900 against it. (In fact, consider this my offer to make that bet right now.)

Then there are the Niskanen climate odds.

Since 2017, Niskanen has received at least $2 million from four institutional donors with a strong history of funding organizations that promote left-leaning climate policy solutions: the David Rockefeller Fund, the Energy Foundation, the Rockefeller Brothers Fund, and the William and Flora Hewlett Foundation.

There is a range of respectable opinion on how much the climate has and will warm and—more critically—how it should be addressed.

On the extreme end is Al Gore’s Nobel Peace Prize–endorsed alarmism, represented by his 2006 film, An Inconvenient Truth, in which he inconveniently predicted sea levels would rise 20 feet within the “near future.” According to NASA, the average rate of sea level increase from 1993 to March 2020 has been 3.3 millimeters per year, or a grand total of 94 millimeters (less than four inches) over the 27-year period. So, at this rate, if you live in Florida or other coastal areas, you have until about March 3867 (1,847 years) to move inland or construct a 20-foot seawall—assuming nothing changes about sea level increases or human behavior for almost two millennia.

This perspective is not meant to minimize the impact of a changing climate or ignore the need to mitigate it. But it does demonstrate that we have time and a range of options for altering that climate (if possible) and working around its effects.

In money line odds, think of it as a +200 challenge. It may not be easy to solve, and it’s not something that should be ignored. But it’s also not a situation where we should let an exaggerated estimate of the risk to drive us to extreme solutions. We can afford to make that mild underdog bet multiple times in modest ways until we inevitably win. This isn’t an expensive +1,000 problem, like defeating fascism or winning the Cold War.

And it’s definitely not a +19,900 problem, necessitating the implementation of radical threats to our way of life.

Natural gas is one of our little climate bets with favorable odds.

But here again, Casino Niskanen has decided to inflate the risk: “We acknowledge that global warming can produce a wide range of possible outcomes—ranging from modest to catastrophic—but we believe that any reasonable risk management exercise points toward immediate decarbonization as the optimal response.”

Total U.S. carbon output declined by 11 percent from the 2006 release of Al Gore’s film until 2018 (the most recent year of data provided by the U.S. Energy Information Agency). During this same period inflation-adjusted U.S. GDP grew by nearly 22 percent, and millions of people were added to the population. We began “immediate decarbonizing” before the Niskanen Center was created in 2015, and a huge part of the reason was a market-driven shift from coal to natural gas, which emits less carbon when burned.

Ironically, one of the Niskanen Center’s contributions to this cause has been an eminent domain litigation center with a laser-like focus on fighting natural gas pipelines. Eminent domain is often abused but is sometimes a necessary evil, such as when economically critical roads or . . . ahem . . . energy infrastructure . . . must be developed. Property owners deserve strong representation in any eminent domain case (legitimate public use or otherwise) and public interest legal firms play a critical role in those fights.

So, the irony isn’t so much that any one of Niskanen’s eminent domain fights is necessarily bad, but that the totality of its legal agenda is at cross purposes with their stated desire to promote a decarbonized American energy footprint.

Unlike Casino Niskanen’s election odds, abundant American natural gas is a good bet for both the economy and the environment. The few making foolish big bets against it include some of those left-leaning institutional donors who fund the Niskanen Center.