When LBJ Warned Us About Southern Republicans (Not Really) 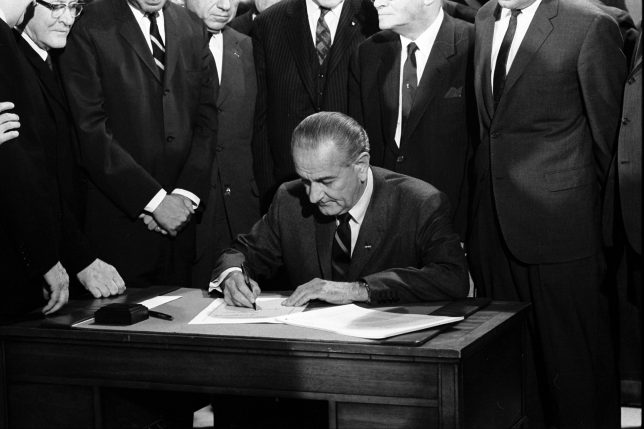 This article originally appeared in American Greatness on August 16, 2018.

“We have lost the South for a generation,” President Lyndon B. Johnson told an aide after he signed the 1964 Civil Rights Act.

Yet a version of that Johnson quote is taught at almost every college in America. It’s in the minds of Justice Department lawyers as they seek to block voter ID in the South. Every election night, it’s a key part of the analysis published in newspapers and broadcast on TV.

Hardly anyone appears to have checked out the quote. How do I know? Because I sought its origin and found hundreds of references and dozens of versions of the story, none with any reference to the original source.

I read the story in all its variations. LBJ made the comment on the day they passed the 1964 Civil Rights Act, or maybe it was the 1965 Voting Rights Act, or it happened on the morning of the day Johnson signed the act, or he said it that evening as he lay in bed, or he said it at the conclusion of the signing ceremony when he turned to a friend, or maybe he said it to an aide, who may have been Jack Valenti or Bill Moyers or perhaps both.

Sometimes, as on Wikipedia, the story was called a “legend.”

My suspicions aroused, I peeled through hundreds of uses of the quote in the news media and in books on politics and history. The earliest reference I could find was in the Winter 1987 New Perspectives Quarterly, in an article taken from an April 1986 speech by Moyers: “[L]ate on the night of signing the bill, I found the President in a melancholy mood. I asked what was troubling him. ‘I think we just delivered the South to the Republican Party for a long time to come,’ he said.”

Thus, the story apparently comes from one person, Bill Moyers, a Johnson aide whose reputation for intense partisanship is fairly likened to that of George W. Bush’s aide Karl Rove.

No one in his right mind would accept, without corroboration, a quote in which, say, Karl Rove claimed that Bush predicted the 9/11 attack but said he couldn’t get people to listen. Yet we are expected to accept as historical fact a highly self-serving, uncorroborated story from Bill Moyers—a story that, strangely, appears to have surfaced more than 20 years after the event supposedly took place.

Besides, if Johnson said it, he was very, very wrong.

In 1964, Republicans carried five of 11 states in the South and elected a handful of members of Congress, but they got a smaller percentage of the vote than they did with Dwight Eisenhower.

Decades passed with Democrats still in firm control of the South. A week before the filing deadline in 1974, Alabama Republicans had no candidates for any of the 13 statewide offices on the ballot, and as late as 1977, there were zero Republicans in the Alabama state legislature. In 1987, the New York Times ran a story with the headline, “Democrats maintain hold on South,” about Republicans’ failure to make significant progress. At that point, 23 years after the signing of the Civil Rights Act, only some 23 percent of Southern legislators were Republicans.

Jimmy Carter carried every Southern state but one in 1976. It was not until 1988 that Republican presidential candidates began to do better in the South than elsewhere. After Reconstruction, there was no Republican governor in Georgia until 2002, no Republican U.S. senator from Louisiana until 2004. Republicans won the North Carolina state senate and the Alabama house and senate for the first time in 2010.

If Republicans won the South due to backlash over the Civil Rights Act, it may have been the slowest backlash ever recorded. It would be as if the election in 2020 were affected by a backlash against the Vietnam War.

Why does the belief persist, that Johnson said it and that his prediction was correct? Because people are lazy, and don’t bother to check things out if they somehow “sound right.”

The late paleontologist Stephen Jay Gould wondered why an early version of a horse, Eohippus, was almost always described as being about the size of a small Fox Terrier. Why did almost everyone use the same analogy—one that happened to be wrong? (Eohippus was about half the size of a Fox Terrier.) Of all animals, why was it always a Fox Terrier?

The answer: A geologist/eugenicist named Henry Fairfield Osborne made the comparison in a pamphlet in the 1920s, and another author appropriated that “fact,” and someone copied it. Before long, it appeared in practically every source. The next writer could use it in full confidence that it must be true and, even if it’s not, it’s well-sourced. The Eohippus/Fox Terrier comparison is an example of a meme, an idea that spreads like a virus.

Watch out for bad memes. If a fact you’re citing has a few dozen variations floating around, you might want to check it out. And, as Abraham Lincoln once said, don’t believe everything you read on the Internet.