What the Anti-Poverty Activists Hath Wrought 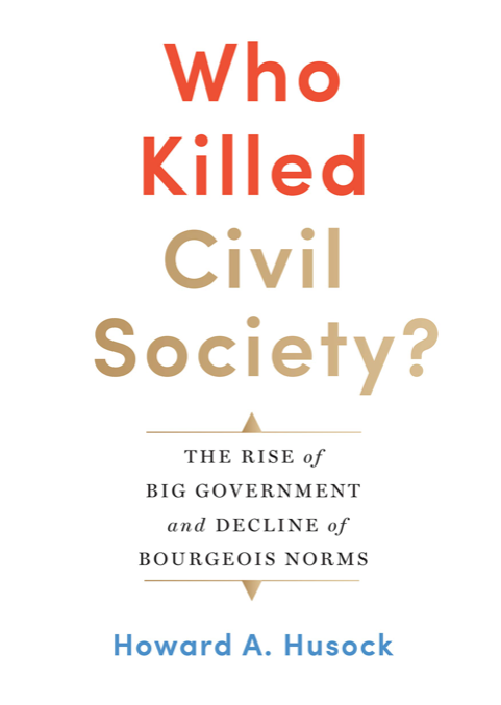 This article first appeared in Law & Liberty on December 9, 2019.

Who Killed Civil Society?: The Rise of Big Government and the Decline of Bourgeois Norms argues that “formative” efforts by private organizations to prevent social problems from appearing in the first place have been supplanted by the “reformative” efforts of government programs to remedy problems once they appear. This has only made the problems worse, says author Howard Husock.

It is a point that, in various forms, has been made before—and Husock, formerly director of case studies in public policy and management at Harvard’s Kennedy School of Government, and now vice president of the Manhattan Institute and a contributor to City Journal, acknowledges and cites those who’ve made it. His short book makes it somewhat differently, however. It is a collection of profiles of six influential figures, five from history and one from the present, who have tried to fight poverty and its many related consequences.

Husock’s talents as a storytelling journalist and as a public policy professor overseeing academic case studies are well put to use in Who Killed Civil Society? Placed together as “snapshots,” its profiles help tell a larger story, engagingly tracing an unfortunate development: the displacement of civil society by the state.

“To Avert Rather than Cure”

The Children’s Aid Society exemplifies “formative” anti-poverty efforts that are effective. Founded in 1853 in New York City, the society was “based on the idea that the children of the poor could rise both socially and economically with the right preparation,” according to Husock. Charles Loring Brace himself described its method as “to avert rather than cure the disease of society”—a phrase that is, Husock writes, “key to understanding how Brace touched the lives of tens of thousands of adolescents.”

When Brace died in 1890, Husock recounts, the essentially Christian but nondenominational society was running 21 industrial schools, 13 night schools for general education, four summer camps, a typing school, a print shop, and three reading rooms, in addition to lodging houses. Between 1853 and 1893, it helped a total of about 85,000 children in its schools. As well, it “placed out” 120,000 poor children on orphan trains with farm families in the Midwest.

Brace “had every quality for philanthropic work; clear insight, perfect sanity of judgment, supreme diligence and indomitable patience,” says Husock, quoting from the obituary of him printed in the New York Evening Post.

Advent of the Settlement House

Husock’s second profile is of Jane Addams, who co-founded her famous organization in 1889 in Chicago. “Settlement houses” like Hull House typically attracted educated, upper- and middle-class volunteers, known as “residents,” to live in poor, urban neighborhoods, often with high numbers of immigrants in them. Addams herself describes the animating, norm-shaping vision of Hull House and similar entities elsewhere: “The American settlement has represented not so much a sense of duty of the privileged . . . as a desire to equalize through social effort those results which superior opportunity may have given the possessor.” (Emphasis added.)

“Over time,” writes Husock, Addams and other settlement leaders “looked well beyond their neighborhood boundaries, envisioning and working toward policy prescriptions to improve the lives of their neighbors through ‘wholesale reform,’ and extending their reform focus nationwide.” He notes that these efforts were part of the dawn of the Progressive Era. In 1912, Addams electrified the Progressive Party convention in Chicago (where she nominated Theodore Roosevelt as the party’s presidential candidate) and was elected to lead the National Conference on Charity and Corrections—the platform of which called for a living wage, regulation of hours of work, workplace sanitation and safety standards, child-labor protections, and the beginnings of workers’ compensation insurance.

“This platform would be the backbone of the liberal social welfare agenda of the twentieth century,” Husock writes. “Addams herself, once religiously inspired, became an agnostic and discontinued prayer services at Hull House. In essence, she became the original secular Progressive. Her emphasis had changed, to say the least.”

Mary Richmond, a contemporary and admirer of Addams’s, is the subject of the book’s third and shortest profile. “A defender of Victorian norms,” according to Husock, “Richmond would fight a losing battle to maintain them as an element in the emerging field of social work—which she herself helped found.”

Then comes Grace Abbott, who in 1917 arrived in Washington to help run the Children’s Bureau, a federal agency that had been established in 1912. Abbott “changed American government in ways that would touch the lives of children and families across the country,” says Husock. Once a Hull House resident, Abbott became a well-credentialed progressive bureaucrat who helped create federal grants to states and assistance payments to individuals that would become known as entitlements. Some of the credentialing of such experts was financially fueled by philanthropies like the Russell Sage Foundation.

Some services, these progressives thought, deserved taxpayer support. “This is the fundamental complication from the entrance of government into realms where civil society once dominated: that which government funds becomes important at the expense of what it does not,” Husock correctly observes. “Social norms of the sort that Brace . . . emphasized would now be de-emphasized, in favor of social services designed to cure ills rather than prevent them.”

During Abbott’s government service, the Social Security Act of 1935—including its Aid to Dependent Children component, which Richmond opposed—laid the basis for the American welfare state, which proceeded to grow. And, over time, grew further. And further.

The change from private action through private groups to using taxpayer dollars to fund agencies and hire agents to implement programs “occurred slowly and incrementally,” Husock writes.  And this accurate statement points to what may be a weakness in the book’s format. The increments by which the welfare state supplanted civil society do not necessarily—and in fact, don’t—evenly align across time with the careers of Husock’s subjects. The resulting unevenness in the larger story tends to pit Husock the storyteller against Husock the social scientist. Still, the benefits of the format outweigh the drawbacks.

The federal welfare state represented by Wilbur Cohen, subject of the fifth profile, remains as “reformative” an undertaking as we’ve ever had, though one might imagine it could perhaps still become even more so. “Few public officials did more to steer the expansion of the social service state” than Cohen, “the consummate federal bureaucrat” in a seemingly ever-expanding federal bureaucracy. Cohen’s career culminated in his becoming Health, Education and Welfare Secretary in 1968 under President Lyndon Johnson. Cohen was known as “Mr. Social Security.” We could also call him the anti-Brace.

The son of an immigrant grocer in Milwaukee, Cohen attended the University of Wisconsin, where the “Wisconsin Idea” promoted the involvement of academically credentialed experts in the development and implementation of progressive governmental policies. Milwaukee’s conservative Lynde and Harry Bradley Foundation (where the reviewers of this book worked) saw much of its grantmaking program in the 1990s and 2000s as something of a philanthropic antidote to the idea and that which it wrought.

A Charles Loring Brace for Our Time

The final section on Geoffrey Canada is optimistic, however. He is a new Brace for our time. Since 1990, he has been president of the Harlem Children’s Zone, now a $58 million operation. Depending on “private philanthropy for the overwhelming majority of the project revenue,” according to Husock, it comprehensively offers a Baby College for new and expectant parents that teaches about middle-class childrearing methods; a pre-kindergarten program that emphasizes reading; after-school tutoring for public school students; and the ambitious (and publicly funded) Promise Academy charter schools pushing a path to college.

The idea is to “make academic achievement and college attendance look normal for young people in the neighborhood—as normal as a neighborhood without trash on the street or graffiti on the walls,” Husock writes. “Kids will get the message that they can do well in school, aim for college, and still fit in with their peers.”

Brace would have liked it.

Cohen would have thought these small, very unscaled numbers. When the Obama administration’s Department of Education tried to help “scale up” the Harlem Children’s Zone model through its “Promise Neighborhoods” program, the effort essentially fizzled, for several reasons. The administrative state is not terribly conducive to religious freedom or tolerant of supporting programs or projects that rely on, say, discipline, character, or grit—bourgeois norms, as Husock notes. While the state “can provide financial assistance or basic shelter, and can set the terms for such provision, it is not the right instrument for instilling” these norms or for fostering what he calls “a culture of aspiration.”

The question becomes “whether a successful promotion of bourgeois norms aimed at creating a culture of aspiration among the poor can coexist with the welfare state,” writes Husock. In answer, he calls for “acknowledging that norms matter, and that changing them calls for serious effort from outside the agencies of government.” In the longer run, we can hope that the Harlem Children’s Zone philosophy might “take hold more widely.”

The Role of Vouchers

Husock’s Civil Society Awards and Civil Society Fellows programs at the Manhattan Institute both pursue goals similar to Geoffrey Canada’s, acknowledging that norms matter and encouraging and advancing them in practice. The institute’s civil society initiative is currently supported by the Bradley Foundation—as was 1997’s high-profile National Commission on Philanthropy and Civic Renewal, which similarly tried to advance civil society revitalization among givers.

As the policy-oriented Bradley Foundation tried to answer Husock’s tough question then and afterwards, it devoted substantial grantmaking resources to school vouchers in the K through 12 education context. It later helped support some of those exploring application of the same concept in social service provision—what was then called “charitable choice.”

Vouchers were at least an attempt to help widen financial (including governmental) support of civil society without sacrificing that which made it so valuable in the first place—primarily in and of itself and, secondarily, as a policy tool. There were and are many advocates of school vouchers in different parts of the country standing upon varied educational platforms, including faith-based, black power, civil rights, and libertarian small-government approaches. Libertarian advocates see school choice as something of a “second-best” way to control government discretion, but one worth pursuing—given the reality that the administrative state will probably not be going anywhere anytime soon.

Husock downplays the suggestion that political scientist William Galston has made, of “vouchers and tax incentives that would allow individuals to strengthen local associations they regard as particularly effective”—saying they merely revisit Wilber Cohen’s “social service state only as far as its funding mechanisms were concerned,” leaving its core ideas intact. Husock also describes President George W. Bush’s attempt to make faith-based groups eligible for social service funds “an acknowledgment—indeed, an expansion—of the social service state,” again leaving its core ideas intact.

Husock’s question remains, then, and may be even tougher to answer than we all would have thought. Who Killed Civil Society? is essentially an autopsy, and a pathologist is not a midwife. For those wanting a rebirth of civil society and trying to figure out how best to work towards it, the story told by the book’s profiles is a necessary part of the historical background.