What I Saw When I Visited My Old Boy Scout Troop 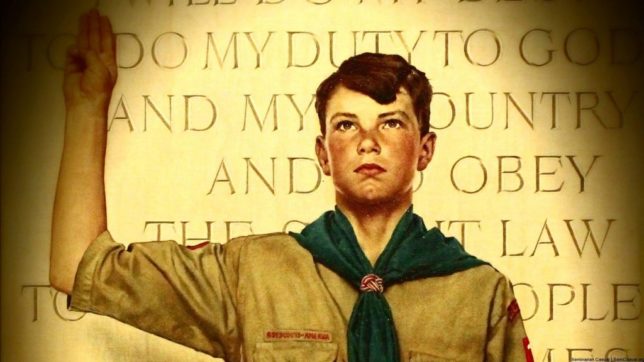 This article originally appeared in Philanthropy Daily on January 2, 2019.

If we’re going to promote a robust civil society, we need to celebrate organizations that have done good work in one place for a long time. So when I received the invitation for the centennial banquet of my Boy Scout troop—Troop 209, in Silver Spring, Maryland—I had to go. I was very glad I did.

Troop 209 has had a lot of continuity. It has been located in a Methodist church in Silver Spring since the 1940s and stayed with the church when it moved a block to its present location in 1965. It also meets on Thursdays, just as it did when I was a member.

They still have patrols and patrol leaders, but when I was a member they had traditional animal names. (I belonged to the Penguin Patrol, and “penguin” was a cutting-edge name back then.) Now the six patrols—up from two in 2012—have names like the Flaming Ice Cubes and the Purple Turtles.

The two great changes in the Scouts, of course, have been the admission of gay men and women. Several of the assistant scoutmasters in Troop 209 and its affiliated Cub Scout pack were women, and the woman who chairs the troop said that the troop “has always supported LGBTQ rights.” Another speaker said the troop was active in the effort to admit LGBTQ individuals to the Scouts that took place between 2010-2013.

There were a few women there who wore the spruce-green uniform of the Venturing Scouts, the Scouts’ organization for older teenagers. But women have been in Venturing Scouts and its predecessors since the 1960s. No girls have asked to join Troop 209. The Methodist church that hosts Troop 209 also hosts a Girl Scout troop.

But it should be noted that the Boy Scouts have tried to be relevant before. As Manhattan Institute fellow Heather Mac Donald notes in this City Journal piece, in 1972 the Boy Scouts changed their name to Scouting/USA and replaced the sections of the Boy Scout Handbook with information on “rat bites, hiking in the city, and dealing with drug abuse.” Scout membership plummeted, and by the early 1980s the Scouts reverted to its traditional formula.

The genius of the Boy Scouts derives from the ideas of its founder, Robert Baden-Powell. As I noted in my Manhattan Institute study By Their Bootstraps, Baden-Powell read a great deal before starting the Boy Scouts. He was also under tremendous pressure from Christians who wanted the Scouts to be explicitly religious and, particularly during World War I, from people who wanted the Boy Scouts to be a paramilitary organization. His goal was to figure out how to teach boys to be virtuous—to honor the virtues of Jews, Christians, and soldiers without being an auxiliary organization to churches, synagogues, or the military.

What I saw at the Troop 209 centennial banquet was an organization that was blissfully free of politics, and which remained committed to the Scout ideal of respecting nature and helping others. They have to go 50-100 miles away to camp, which was a lot farther than in my time. But they’re in the woods at least once a month, and have a big trip at least once a year, including to the national Boy Scout campground in Philomont, New Mexico.

I also liked learning that Troop 209 was planning a trip to Antietam—and part of the reason for going there was to learn about and honor the Union soldiers who were wounded or killed defending our country.

Finally, it should be noted that the Troop 209 banquet was an event where three dozen teenagers listened to speakers for two hours—and I saw no one staring at their phones.

Has Troop 209 evolved from when I was a member? Of course it has. But what I saw was an organization that remained committed to timeless Boy Scout ideals. And I will treasure my commemorative Troop 209 centennial patch.