What Conservative Philanthropy Should Have Seen Coming

Respected Wall Street Journal executive editor Gerald F. Seib’s interesting and engaging new book We Should Have Seen It Coming: From Reagan to Trump—A Front-Row Seat to a Political Revolution skillfully overviews the 40-year reign of the conservative movement from the election of Ronald Reagan in 1980 to the Republican Party’s takeover by Donald Trump. “We all should have seen it coming,” Seib declaratively begins the book. 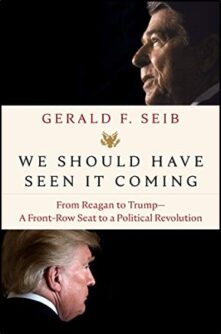 “For almost four decades, the Republican Party had been defined by a man, Ronald Reagan, and his movement, the Reagan Revolution,” Seib continues. “Over time, however, emerging signs—chief among them grassroots anger at the political and financial establishments and frustration over the impact of conservative policies on the party’s new working-class base—suggested that the foundation Reagan had built was starting to crack, though those signs were largely ignored or dismissed.”

In the well–reviewed book, Seib does mentions some donors—including Joseph Coors for his early support of The Heritage Foundation starting in the 1970s and the libertarian Koch brothers’ widespread support of Tea Party and related groups in the ’90s. Seib’s work, however, is primarily political and does not aim to cover that which conservative foundations did to build the mostly nonprofit intellectual infrastructure undergirding or bolstering Reaganite conservatism. There’s already something of a ready-made bibliography for that, and not all of it self-servingly written by conservatives or conservative philanthropoids themselves.

At least some conservatives, moreover, and—recklessly dispensing with any bothersome concerns about self-servingness—conservative philanthropoids may have seen and tried to respond to a few emerging signs of increasing working-class alienation, decreasing trust in and among so many existing institutions, and overwhelming strain being put on America’s very national identity.

It has been a decidedly dramatic and traumatic time. It is past time to consider what’s next, no matter which presidential candidate wins later this year. This is certainly the case for conservative philanthropy, which should have a longer-term outlook than the next election anyway.

True Believers, Straddlers, and the Repelled

Seib ends We Should Have Seen It Coming with what could be a helpful, chapter-length framing of what’s next, or what could be next. What should we see coming? In particular, what should conservative philanthropy see coming in the next four decades? Or, okay, even the next one-and-a-half or two?

Again, Seib’s book is political, so it may have limited value to offer philanthropoids. In fact, a previous short-term overconcentration on the political may actually have caused an already-overpoliticized philanthropy to not see what was coming in ’16. Acknowledging, and taking, the risk of considering his view of the current landscape and then trying to apply his analysis in a philanthropic context, “[c]onservatives split, roughly speaking, into three camps” when it comes to Trump, according to Seib.

“First are Trump true believers … who believe Trump really is a logical descendant of Reagan and an embodiment of what conservatives need to be to respond to the changes in the country in the years since Reagan rode into the sunset,” according to Seib in the chapter, “What Now?”

These people have misgivings about Trump, sometimes deep misgivings, but either decided that he had put his finger on some important challenges facing America, or felt they needed to bend to Trump in order to accomplish things they considered important in a government in which he holds such a preeminent. The alternative was ineffectiveness.

Finally, “Third are the Never Trumpers,” Seib writes, “who tend to be repelled by Trump and who also reject the idea that he embodies conservative principles.”

Participants in the Debate

From each of the three camps, Seib names specific people who have been actively participating in the debate. “Yet the debate about Trump personally, important and consuming as it is, glides past two deeper questions: What is going on in America that made the rise of Trump possible—perhaps even inevitable? And where do conservatives and Republicans go from here?”

AEI, Hudson, the Manhattan Institute, and EPPC, of course, are among the many long-established conservative nonprofit think tanks. ACU has an affiliated nonprofit. American Compass is one of several energetic conservative nonprofit “new kids on the block.” With continued or maybe even enhanced philanthropic support, these and other existing and hopefully more new think tanks and journals will be part of the coming refinement or redefinition of a currently confused conservatism.

DeMuth “thinks much of today’s ferment can be traced to conservatives and Republicans losing touch with economic anxieties around the country, and offering what became pat but unsatisfactory answers,” in Seib’s words. Cass argues that “the prevailing conservative economic policies of recent decades actually  sowed the seeds for some significant problems, which the movement failed to see taking shape,” by Seib’s telling, and he “is advocating something conservatives a generation ago would have considered an apostasy: industrial policy.”

After quoting Will, Seib writes that “Important as economics might have been in opening the way for Trump, alienation and a deep cultural divide in the country appear to have been even bigger forces.” Wehner agrees “that anger helped draw Republicans into Trump’s orbit” and says “Trump appeared to disaffected Americans, Republican and independent alike, as a kind of ‘wrecking ball’ prepared to lay waste not just to Democrats and liberals but to Republicans who were seen as part of the despised elites.”

We at The Giving Review have urged what we characterized as a (Michael) “Novakian balance” in conservatism’s coming clarification—with a preference for promoting its populist impulses, including for preserving America’s national identity; as expressed and lived in local communities and neighborhoods;  and with properly prescribed, and described, roles for business, government, and civil society.

With continued or enhanced philanthropic support, these and many other views—from those in Seib’s categories of true believers, straddlers, and perhaps some Never Trumpers, if any have retained their conservative “standing”—will and should be part of conservatism’s refinement or redefinition.

We all see what’s coming. Let’s get on with it. What’s coming is what’s needed.

This article first appeared in the Giving Review on September 30, 2020.