Welcome to the New Class Warfare 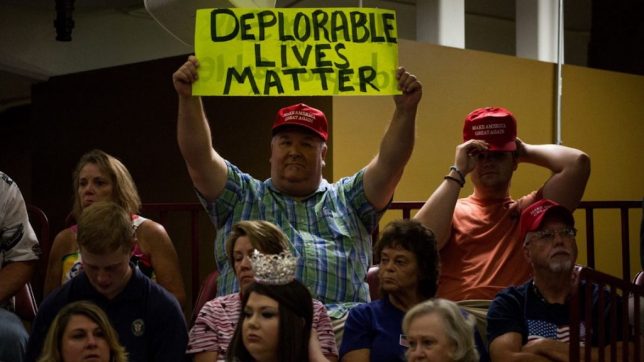 The Democratic Party was once considered the home of working people. That changed as mainstream liberals of the 1960s such as Hubert Humphrey, John and Bobby Kennedy, and AFL-CIO leader George Meany were replaced by radicals and their ideological offspring.

A key moment in that transition came during Barack Obama’s first presidential campaign. Before a group of wealthy supporters in California, Obama spoke condescendingly of people in small towns in Pennsylvania and the Midwest where “the jobs have been gone now for 25 years and nothing’s replaced them. . . . And it’s not surprising then they get bitter, they cling to guns or religion or antipathy to people who aren’t like them or anti-immigrant sentiment or anti-trade sentiment as a way to explain their frustrations.”

In 2011, Thomas Edsall wrote in the New York Times:

(P)reparations by Democratic operatives for the 2012 election make it clear for the first time that the party will explicitly abandon the white working class.

All pretense of trying to win a majority of the white working class has been effectively jettisoned in favor of cementing a center-left coalition made up, on the one hand, of voters who have gotten ahead on the basis of educational attainment—professors, artists, designers, editors, human resources managers, lawyers, librarians, social workers, teachers and therapists—and a second, substantial constituency of lower-income voters who are disproportionately African-American and Hispanic.

After the 2014 election, in which 64 percent of “white” voters without college degrees favored Republicans, political analyst Ronald Brownstein said of such voters: “You’re talking about people who are deeply alienated from American life, both culturally and economically.”

Soon, those “alienated” people had a candidate. In August 2015, the British news magazine The Economist called Donald Trump’s base “relatively uneducated supporters who don’t have much disposable income, are relatively unlikely to volunteer on his behalf, and who may not even show up at the polls on primary day.”

Henry Olsen of the Ethics and Public Policy Center (and a regular contributor to American Greatness) wrote in National Review:

Thanks to Donald Trump, American elites are finally paying attention to blue-collar, white America. They do not like what they see.

Racist. Bigoted. Irrational. Angry. How many times have you read or heard one or more of these words used to describe Trump’s followers? Whether they are the academic, media, and entertainment elites of the Left or the political and business elites of the Right, America’s self-appointed best and brightest uniformly view the passions unleashed by Trump as the modern-day equivalent of a medieval peasants’ revolt. And, like their medieval forebears, they mean to crush it.

Angelo Codevilla, professor emeritus at Boston University, noted that “America is now ruled by a uniformly educated class of persons that occupies the commanding heights of the bureaucracy, of the judiciary, education, the media, and of large corporations, and that wields political power through the Democratic Party. Its control of access to prestige, power, privilege, and wealth exerts a gravitational pull that has made the Republican Party’s elites into its satellites.”

Indeed, rabidly anti-Trump Republicans shared Democrats’ disdain for Trump supporters. Kevin Williamson of National Review wrote, “The white American underclass is in thrall to a vicious, selfish culture whose main products are misery and used heroin needles. Donald Trump’s speeches make them feel good. So does OxyContin. What they need isn’t analgesics, literal or political. They need real opportunity, which means that they need real change, which means that they need U-Haul.”

From there, it was a short walk to Hillary’s Clinton’s description of half of Trump supporters as “deplorables.”

What you’re seeing now, played out every night on the news, is class warfare.

America’s privileged elites refuse to accept Trump as president and support any effort, no matter how absurd, to bring him down. (Impeach him! He’s a Russian spy!)

Trump may be a New York billionaire, but to the elites, he’s a man of Queens—the Queens of working-class history and Archie Bunker stereotype—rather than a sophisticated Manhattanite, who would be fit for the presidency.

Worse, he is a stand-in for his supporters. Too many of them are the kind of folks who work on farms or in factories or on construction projects. Too many are the sort who take showers after they get home from work rather than before they leave for work.

It’s a pattern repeated throughout history: Members of one group—say, the British aristocracy, or the Bourbon planter class in the South—come to dominate members of another group—the peasantry, or poor African-Americans and white farmers. In the minds of the elites, the advantages they experience must be the result of their innate superiority; they are more moral, more sophisticated, more intelligent than the lower classes. They’re just better.

On Inauguration Day, President Trump said, “January 20, 2017, will be remembered as the day the people became the rulers of this nation again. The forgotten men and women of our country will be forgotten no longer.” But you can’t give power to “the people . . . the forgotten men and women” without taking it from those who have it. Members of the elite will fight for what’s theirs, because, they believe, what’s theirs is theirs by right.

For them, that means the 2016 election must be nullified, by any means necessary.