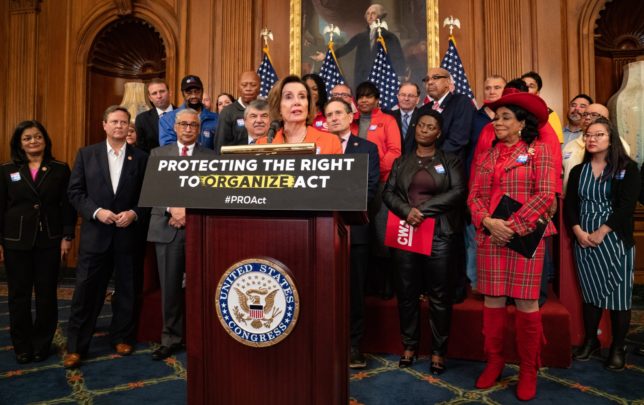 Nancy Pelosi at a press conference promoting the PRO Act on February 5, 2020--one day before the House passed the PRO Act. Credit: Nancy Pelosi/Twitter.
by Michael Watson

Big Labor support put the Biden administration and the Democratic Congress in power, so Big Labor expects them to deliver legislation on the lines of the Protecting the Right to Organize Act (PRO Act), which would strengthen unions’ power to coerce workers to submit to union representation and to pay dues for the privilege. Yet organized labor already has substantial coercive power and a habit of abusing it, even without superseding precedents dating back to nearly World War II.

One group fighting for individual employees trampled by union officials is the National Right to Work Legal Defense Foundation (NRTWLF), a public interest law firm that litigates and represents workers charging unions with violating labor laws. They publish frequent updates on the cases they bring, and those updates show a consistent thread: Even where established law and practice are clear, unions routinely infringe workers’ legal protections against being forced to pay for political and lobbying activities.

The Rules About Forced Dues

Federal labor law gives unions the power to force all workers, not just union members or those who want union representation, to work under a union contract after a union is established in a private-sector workplace. In states without a right-to-work law (under the PRO Act, that would be all of them), labor unions have the additional power to force workers to pay the union exercising its government-granted monopoly. Unions that whine about “free riders” are hiding the ball: They are compensated with unusual levels of power to force unwilling workers to accept their unwanted “help.”

Forced dues and monopoly bargaining arrangements are otherwise alien to American law and custom. (Homeowners associations—those well-respected bastions of sanity, justice, and honor—are among the only other nominally private entities given de facto power of taxation.)

The Supreme Court has found that unions’ power to collect forced dues may not violate workers’ statutory rights. In Communications Workers of America v. Beck, the Court held that unions could only force objecting nonmembers whom the unions demand the power to represent to pay the portion of dues that covers the nonmember’s share of representational activities and overhead.

In practice, these Beck rights prove difficult to exercise, as the unions themselves determine the share of dues deemed “chargeable” or subject to forced payment, and the unions maintain convoluted schemes to process objections. The usual union gamesmanship tactics surround restrictions on when workers can resign union membership and file formal objections to paying for political activities (called “opt-out windows”). Other fine-print restrictions limit how members can resign and object, and union calculations of the “representational” expenses sometimes do not comport with the facts, thus forcing workers to pay for union politics.

Because unions often fail to respect the spirit and letter of Beck, the National Right to Work Legal Defense Foundation frequently finds itself arguing before tribunals on behalf of workers forced to pay for union politics.

In one case before the National Labor Relations Board Region 20, NRTWLF client Nina Chiu of Hawaii alleged that Unite Here did not comply with its obligations to provide a breakdown of what expenses were chargeable despite her filing two Beck resignation-and-objection letters.

Another client from Oregon alleged that a local of NABET-CWA improperly handled his attempts to resign union membership into which he had been misled into accepting. The local union neglected to inform him that to obtain Beck objector status and reduced forced dues the union expected him to send his resignation to its national headquarters, not the local union. A National Labor Relations Board (NLRB) administrative law judge agreed that the union’s maneuvering was improper and ordered NABET-CWA Local 51 to repay with interest the improperly taken excess forced dues.

Unions also will claim falsely that objecting nonmember workers are required to pay forced agency fees before a contract is in force. (Recall, the “union security clause” that secures forced dues payments in non-right-to-work states is a contractual provision.) One NRTWLF client secured a settlement from the International Union of Operating Engineers after filing a Labor Board complaint alleging various infractions of forced dues collection rules, including that “IOUE officials also ‘demanded and collected dues for a period of time when there was no [monopoly] bargaining agreement.’”

One recent NRTWLF case in particular shows just how determined a labor union can be in its attempts to grind down an objecting nonmember into yielding forced dues beyond the legal maximum. Jeanette Geary, a Rhode Island nurse obligated to accept representation by the United Nurses and Allied Professionals, challenged the union’s forced dues calculations and demands that she pay a share of the union’s state-level lobbying expenses in 2009. After various legal contrivances and shenanigans (including the Obama administration’s infamous attempt to circumvent the Senate’s power to advise and consent on nominations that culminated in the unanimous NLRB v. Noel Canning Supreme Court decision), an appeals court finally rejected in February 2021 the union’s attempts to force Geary to pay for its lobbying expenses over 11 years later. The denial of the union’s petition for en banc rehearing came almost five months after an appellate panel, which included liberal former Supreme Court Justice David Souter, found unanimously that there was “no convincing argument that legislative lobbying is not a ‘political’ activity.”

The PRO Act and Beyond

If Congress passes and the Biden administration enacts the Big Labor wish list known as the PRO Act, every state would be required to allow forced-dues contracts. In addition to filling the coffers of the unions that spend heavily to elect Democrats and lobby for liberal policy, these forced dues contracts will further enable Big Labor to violate the longstanding rules limiting use of forced dues for politics.

While the PRO Act itself would not override Beck, the ruling relied on statutory interpretation, not the Constitution. Legislators aligned with unions could go even further and try to force the new forced dues–payers to fund union lobbying. Anyone familiar with the “educator endorsed” school boards that have done the teachers unions’ bidding in preserving school lockdowns should know better than to assume that would be impossible.