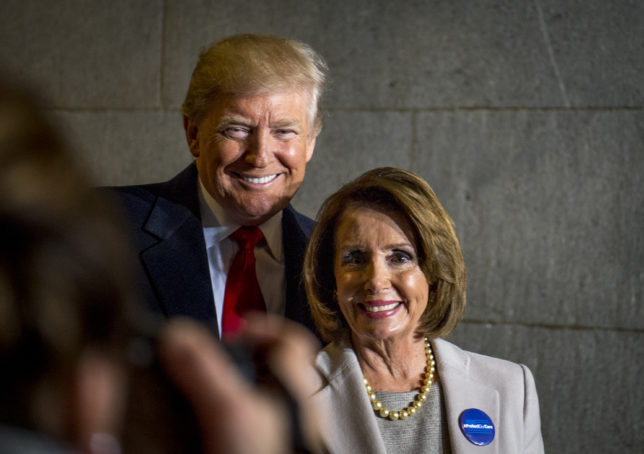 This op-ed originally appeared on Townhall.com on February 8, 2019.

By pushing the bill known as H.R. 1, Speaker Nancy Pelosi (D-Calif.) and her 220 compatriots in the House of Representatives appear prepared to blackmail the rest of us by threatening the anonymity—and free speech—of citizens who give to nonprofits engaged in public advocacy. Oddly, House Democrats must think their “For the People Act” is worth helping re-elect President Trump, in order to weaken right-leaning institutions.

Help Trump’s re-election? Oh yes. H.R. 1 entrenches incumbent politicians and lobbyists who benefit from opaque campaign finance laws, and it discourages average Americans from participating in national elections. This biased approach to campaign finance would require nonprofits, labor unions, and trade associations that advocate for or against candidates or legislation to disclose the identity of their donors after spending just $10,000 per two-year election cycle.

The restrictions H.R. 1 places on campaign-related spending inherently favor incumbents—including President Trump—because challengers lack the spotlights that incumbents use to get publicity and raise money.

The bill also expands the types of communication regulated by the Federal Election Commission (FEC) to include even speech that’s hosted on an organization’s own website or social media. Under H.R. 1, the kinds of words you’re now reading may be enough to force groups like the American Federation of Teachers or the NRA to disclose their donors.

H.R. 1 expands the regulation of speech to include “public communications which refer to a clearly identified candidate for election for Federal office and which promotes or supports . . . attacks or opposes a candidate for that office, without regard to whether the communication expressly advocates a vote for or against a candidate for that office” (emphasis added). This empowers the FEC to decide how to interpret the terms promotes/ supports/ attacks/ opposes, and whether to count funds spent on digital communications as “campaign related disbursements.”

The bill is so vague it will force most affected organizations to seek out an FEC opinion on whether their speech would jeopardize the identities of their supporters. That runs counter to the Supreme Court’s Citizens United decision, which held that vague and expansive campaign finance laws that require individuals and groups to request FEC opinions before speaking create an unconstitutional “prior restraint” on speech.

In another pro-incumbents scam, H.R. 1 would politicize the FEC by shrinking it from six commissioners to five. The President would appoint the majority of commissioners, who would be poised to punish the opposition party.

Far from getting money out of politics, H.R. 1 increases the cost of participating in elections. The bill requires additional disclaimers on online advertisements—ads that are a cost-effective way for grassroots groups to reach key audiences—which could make online political ads prohibitively expensive or altogether impractical. The law would also treat online publishers like broadcasters, forcing them to maintain an exhaustive “public file” of information about ads and sponsors. This extra compliance raises the cost of online issue advertising, hurting grassroots groups who can’t afford to use other media.

The new requirements on advocacy communications—increased screen-time for sponsor information, organization authentication, and donor disclosure—hurt political discourse in a way that Democrats surely never intended: they ensure only the wealthiest and most strident politicos and megadonors—like Donald J. Trump—will be willing to continue business as usual. Others will be priced out of the national conversation, unable to afford expensive consultations with campaign finance lawyers or the extra air-time required to disclose affiliations, donors, and officers. Many more donors will be unwilling to forfeit their privacy in exchange for free expression.

And if they want to help ordinary Americans—instead of coddled incumbents—participate in elections, they’d respect Americans’ privacy not only when casting a ballot but also when writing a check for a favorite cause.

When Jim Crow incumbents in power in Alabama tried to violate the privacy rights of the NAACP’s members and donors in the 1950s, the U.S. Supreme Court handed down a landmark decision vindicating those privacy rights. House Democrats today should show the same respect for Americans’ civil rights and stop trying to ensure that incumbent pols—including their nemesis, President Trump—maintain the whip hand in elections.