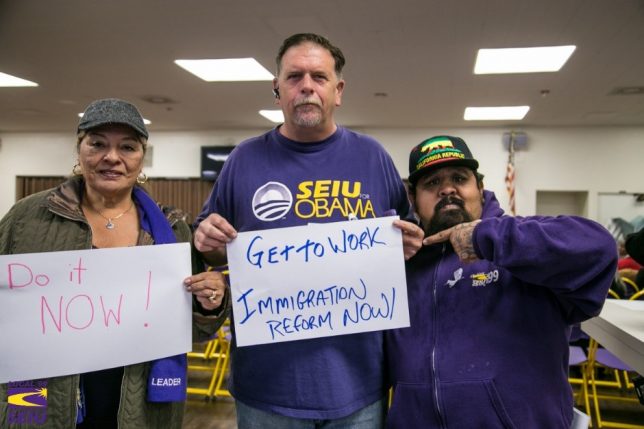 In 2009, the AFL-CIO under my direction started a project in Vermont to organize childcare workers. We were following a trail blazed by the Service Employees International Union (SEIU) and the American Federation of State, County and Municipal Employees (AFSCME) in states like Illinois. At that time, thousands of individuals and centers providing childcare in Vermont participated in a program where they were paid a subsidy by the state to provide childcare for low-income families. We wanted to organize them. Our problem was the providers were independent contractors and small business owners, not traditional employees, really, and certainly not employees of the state.

We got a convoluted bit of legislation passed that identified the State of Vermont as their employer; then, poof! like genies out of bottles came thousands of new potential union members in a nice clean bargaining unit.

But creating the thing on paper doesn’t actually create it in flesh and blood. In no real sense were providers connected by anything other than the registry Montpelier that listed their names so the state could pay them.

We union types figured we would never see more than 15% percent of these formerly independent child care providers sign up as members. So for our efforts to be successful, we would need agency fees baked in. To fund a single staff person in Vermont dues would need to be set fairly high as a baseline; unions could then collect 85 percent of that in agency fees, in a check cut directly from the state.

If you think this scheme doesn’t have much in common with the normal agency fee case I laid out earlier, you’re exactly right. It uses agency fees as part of a strategy to build a union; a concept we knew wouldn’t be supported by a majority of the providers.

Ironically, for most of the five years it took to pass this legislation, unions were regularly accused of creating a plan to get rich off the providers. In truth, the plan would never have done more than just pay for itself. Maybe.

So why did we do it?

The Vermont legislation handed unions a great tool to bring thousands of low income women into the fold. Because these low-income women would be covered by the union contract, union political commissars are allowed to communicate with them on political matters. And because each child care provider saw five to six families daily through their childcare businesses, they could theoretically help proselytize union views. Thus they could help unions create a powerhouse political machine that could reach every nook and cranny in the state. (Scoff at an army of nannies at your peril!)

It would have been beautiful. For the unions.

We lost our election over this issue of unionized childcare workers. The next day, I got a call from an organizer in a different union.  They had won a similar election but our union was better off losing, the organizer told me: Yes, they had won, the organizer said, but with only ten percent membership, and they still had to deal with an unwieldy and dysfunctional system.

Behold, this is the punishment when you build a political strategy on an unstable foundation; on what was supposed to be no more than a fee to cover a few free riders!

In the final installment of The Insider’s Tale, we see why union members should support Right to Work legislation — for the future of their unions and liberties.