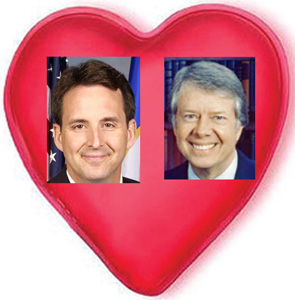 Pawlenty certainly talks a good shtick when it comes to free markets, low taxes, and limited government, but his views on climate change and energy policy are downright frightening.

“We should not spend time on voices that say [climate change] is not real,” Pawlenty said even as new evidence surfaces almost daily that undermines the alarmist consensus.

“We should have listened to President Carter” about energy policy, Pawlenty said.

In it Carter blamed Americans for the problems in American society at that time. He told Americans they were too materialistic and greedy and that they needed to make do with less. He told Americans that turning down their thermostats and wearing sweaters indoors would help solve the nation’s problems.

And Pawlenty says we should have listened to President Carter?