Creamer and Foval: Dreamers and Schemers 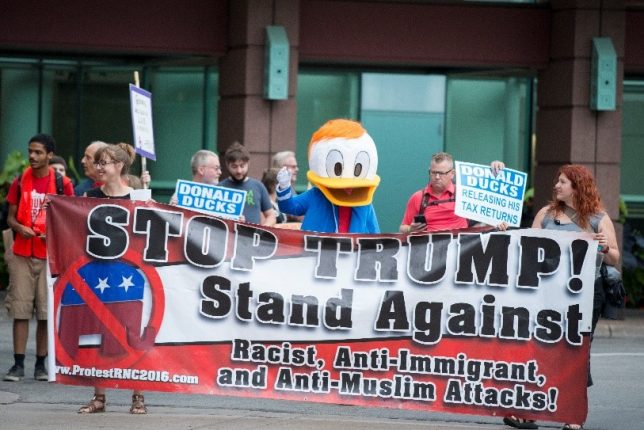 Summary: 2016 Republican Presidential Nominee Donald Trump drew a record number of protests by left-wing activists during his campaign. These “grassroots” demonstrations, though, were anything but spontaneous. In this installment of Creamer and Foval, we investigate the most bizarre ploy in the Creamer-Foval arsenal.

Creamer’s most bizarre ploy in the 2016 presidential election came in a duck costume.

The idea was to mock Donald Trump for “ducking” calls to release his tax returns, a common but not legally required tradition among presidential candidates. “We put out a whole blast and a [news] release around the idea that he [Donald Trump] was ducking,” AUFC president Brad Woodhouse was recorded saying by a Project Veritas investigator. But the scheme involved sending protesters to demonstrate outside of the Trump International Hotel in Washington, D.C. dressed in duck costumes. They called it “Donald Ducks.”

The affair offers a glimpse into the inner workings of Creamer’s machine. “Originally,” he said, “we were going to do… Uncle Sam [saying], ‘I want you to release your tax returns.’ I agree it’s not as good.” They rejected the idea in favor of the mildly cleverer duck costume, he told the undercover investigator; but most critically it was Hillary Clinton herself who demanded that DP employ the Donald Ducks project. She “just loved it,” he said during a meeting with Woodhouse. “And in the end, it was candidate, Hillary Clinton, the future president of the United States, who wanted ducks on the ground. So, by God, we will get ducks on the ground.”

“Don’t repeat that to anybody,” he quickly adds.

If any part of Democracy Partners’ role as a communications hub for the Clinton campaign apparatuses potentially violates FEC coordination laws, it’s the Donald Ducks scheme. Project Veritas founder James O’Keefe says that experts have told him that

the ducks on the ground are likely ‘public communications’ for purposes of the law. It’s political activity opposing Trump, paid for by Americans United for Change funds but controlled by Clinton/her campaign.

It’s important to remember, too, that in the Project Veritas videos, Creamer is heard saying that he AUFC ran daily conference calls with the Clinton campaign, coordinating where to send the costumed agitators and how to frame strategic messaging. Foval added that “[w]e have to clear this with the DNC, with the Democratic National Committee. We have to clear which message we’re going to be targeting at each event.”

Then-DNC Chair Donna Brazile, Creamer explained, was worried about a trademark issue concerning ABC, which is owned by the Walt Disney Company, and the similarity with the Disney character Donald Duck. So Creamer and DP reframed the slogan from “Donald ducks his taxes” to “Trump ducks releasing his tax returns,” and put the project under the ownership of AUFC. When the Wall Street Journal reported on the decision on September 8, 2016, the DNC spokesman refused to say why they’d cut ties with the character.

One of the duo’s ongoing projects involved voter fraud with illegal aliens living in the United States. Project Veritas captured footage of Scott Foval brainstorming ways to use lax voter identification laws to influence elections with an undercover investigator posing as a donor. Foval then put the “donor” in touch with Cesar Vargas, an illegal immigrant born in Mexico.

Vargas is what the Obama administration called a “dreamer,” a class of noncitizens protected under the Deferred Action for Childhood Arrivals (DACA) and DREAM Act programs. He recently became New York’s first “openly undocumented lawyer,” wrote Natalie Shutler in VICE magazine, after winning a four-year battle in the courts to defy a federal rule banning states from issuing professional licenses to most noncitizens in the country. Vargas is a left-wing activist and co-founder of Dream Action Coalition, a nonprofit that advocates for illegal immigrants. In January 2015, he was arrested after protesting Republican presidential candidates at the Iowa Freedom Summit with a sign reading, “Deportable?” Vargas later joined Sen. Bernie Sanders’ 2016 presidential bid as National Latino Outreach Strategist, and is a “known associate” of Bob Creamer, according to Project Veritas. Meeting with the “donor,” Vargas is recorded saying:

So I think it’s about, for us, let’s see who the next president is. If it – if it’s Donald Trump, it even makes more sense. The issue will be more credible and it’ll give us more opportunity to jump in there. If it’s Secretary Clinton, and the voter ID laws are losing and we have much more opportunity to vote, and we have immigration reform, it’s not going to be as significant, right?

Falling On Your (Rubber) Sword

“It doesn’t matter what the friggin’s legal and ethics people say,” Foval admits about the 2016 election in the Project Veritas videos, “We need to win this mother***er!” For Bob Creamer and Scott Foval, victory is always the goal – and the means are always negotiable.

When Project Veritas released the footage of its undercover sting in October 2016, video views exploded on YouTube and conservative media outlets. Many television networks, however, quickly cancelled their agreements to run the videos, limiting the fallout for the Clinton campaign in the leadup to the November 8 election. Some left-wing media outlets and the DNC accused Project Veritas of doctoring its video, calling PV founder James O’Keefe “discredited” and pointing to two past instances during similar investigations where the group edited video and audio alignment to solidify its narrative. O’Keefe dismissed the responses.

But if the videos were doctored or fake, why did Creamer resign and Foval get the boot from the Clinton campaign apparatus virtually overnight?

That only lends credence to Project Veritas’ claims of election fraud and dirty practices by Clinton-aligned groups. (Cesar Vargas, notably, did not lose his job over the videos.)

For Creamer, of course, the firing didn’t come with any real consequences. Few on the Left took his firing seriously, considering he retains his prominent position with Democracy Partners and SCG.

The felon and his wife were even honored with a seat in the front-row during President Obama’s farewell speech in January 2017. Watch the video here:

And according to CRC vice presidents Dr. Steven J. Allen and Matthew Vadum, Creamer taught a filmmaking class at the prestigious American Film Institute. Whatever the Trump presidency may bring, Creamer doesn’t seem about to go anywhere anytime soon.

It’s a sad ending to a tale of corruption, though the larger story seems far from over. In the shady world of left-wing politics, it seems, crime indeed pays.