This is what “Al Qaeda on the run” looks like

We know the President’s telling the truth because of how quickly he moved to fire that Clapper guy (James Clapper, the director of national intelligence). Which is to say, he didn’t fire him. When someone who serves at the pleasure of the President seems to be unfit for his or her office and doesn’t get fired, there’s a good reason. That person is the President’s fixer (Eric Holder, John Mitchell), or has information that could do the President in (Janet Reno, J. Edgar Hoover), or is the President’s fall guy. Given the state of the world (best summarized as “in flames”), the DNI makes a convenient fall guy.

The President made his latest the-buck-stops-over-there claim Sunday night on “60 Minutes,” about which PJMedia notes (at http://pjmedia.com/tatler/2014/09/29/obama-on-isis-its-james-clappers-fault/?singlepage=true):

Obama could have also admitted that he got ISIS wrong, when he called them the “JV” of terrorism. They are in fact an offshoot of al Qaeda, just as the so-called Khorasan group is an offshoot of al Qaeda — the jihadist group that he claims to have “decimated” and sent scurrying “on the run.” He could have admitted that none of that was true, that al Qaeda is mestasizing from the border regions in Pakistan-Afghanistan to Iraq and Syria to Yemen to Somalia to Boko Haram in Nigeria. And possibly to Oklahoma and New Jersey and Portland.

Instead of admitting any of that, Obama blamed one of his subordinates.

> Steve Kroft: I understand all the caveats about these regional groups. But this is, what, an army of 40,000 people, according to some of the military estimates I heard the other day, very well-trained, very motivated.

> President Obama: Well, part of it was that…

> Steve Kroft: What? How did they end up where they are in control of so much territory? Was that a complete surprise to you?

> President Obama: Well I think, our head of the intelligence community, Jim Clapper, has acknowledged that I think they underestimated what had been taking place in Syria.

The morphing of Al Qaeda into a variety of forms should come as no surprise to anyone who read my 2007 article on its organization structure in the Biodefense Journal, which was adapted and updated in this blog in June 2013, posted at http://capitalresearch.org/2013/06/starfish-al-qaeda-the-tea-party-and-the-power-of-a-list-2.   And last May I wrote, at http://capitalresearch.org/2014/05/obama-versus-al-qaeda-bull-in-a-china-shop, about how we got to this point, with Al Qaeda and its siblings closer to victory than ever before.

The idea of Al Qaeda being “decimated” (which actually means, roughly, reduced by one-tenth, but which most people take to mean “nearly destroyed”) or of AQ being “on the run” was concocted by the news media and the Obama campaign to get the President re-elected. That’s why Benghazi was so important. Yes, the four brave Americans who died that day deserve justice, and someone should be held accountable for the incompetence and perfidy that led to their deaths. But the real significance of Benghazi was that it was part of an effort to cover up, during the 2012 campaign, the growing threat of Al Qaeda and other Islamofascist terrorists (“Salafi-Jihadists”).

Here are three charts that show this, taken from a 2014 report that the RAND Corporation, a think tank, prepared for the U.S. Secretary of Defense (http://www.rand.org/content/dam/rand/pubs/research_reports/RR600/RR637/RAND_RR637.pdf). 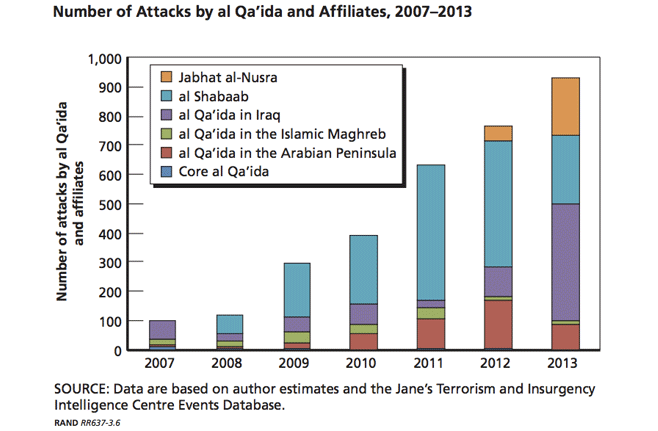 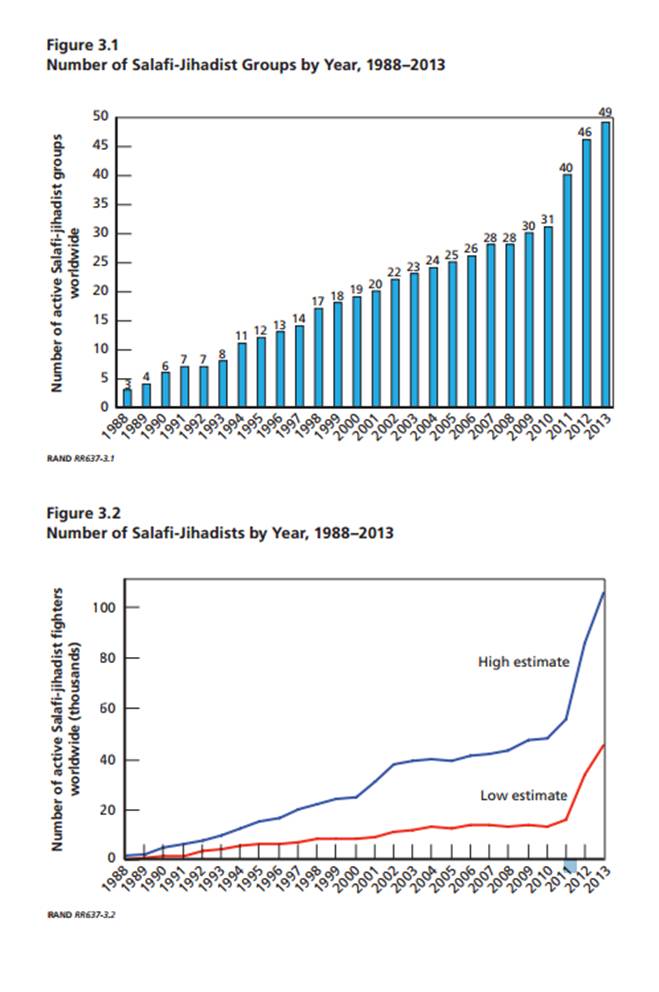