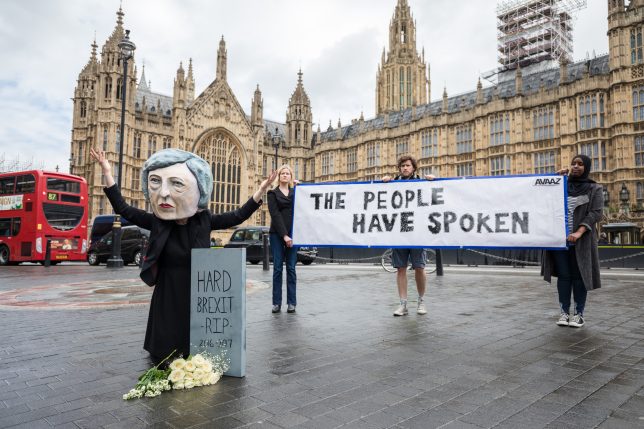 On November 15th, 2018, the second Secretary of State for Exiting the European Union (commonly called “Brexit Secretary”) in the Cabinet of British Prime Minister Theresa May, Dominic Raab, resigned from the Cabinet in protest; this may precipitate a vote of no confidence against the leader of the current head of the British government. This is just two days after Prime Minister May brought to Parliament the proposed separation arrangement between the United Kingdom (U.K.) and the European Union (EU), otherwise known as Brexit. The major “Brexiter” pressure group, the European Research Group (ERG) and its leader Jacob Rees-Mogg, are already endorsing a vote against the Prime Minister.

The ERG is publicly funded through the Independent Parliamentary Standards Authority (IPSA), which funds much of the lobbying in the legislature. The British system directly funds many of its political factions as a method to fairly distribute money in lobbying. The ERG is the official group of Conservative Members of Parliament that advocate for a strong withdrawal from the EU within the House of Commons. The government’s recent draft agreement with the EU is antithetical to the ERG’s views.

Brexit is a huge issue for the United Kingdom and the European Union alike. Just under 52 percent of the U.K.’s eligible voters decided to vote in a simple referendum on whether the U.K. should leave or remain a member of the EU, on June 24, 2016. But behind the public mandate were problems: The British informal constitution has no self-execution provision for a referendum, and the referendum did not indicate what type of relationship with the Continent British citizens wanted to have instead.

These problems have divided the nation beyond its traditional party lines. Both the Conservative and Labour parties had to wrangle Eurosceptic and Europhilic factions as they try to negotiate the terms for Brexit. While the Labour Party has tried to be the party of Remain and the Conservatives the party of Brexit, former Conservative Prime Minister David Cameron resigned after the vote because he advocated to remain. Theresa May as the new Prime Minister and Conservative leader certainly didn’t have an easy task when she moved into 10 Downing Street.

To make matters worse, the 2017 U.K. general election was supposed to strengthen the Conservative pro-Brexit majority against the far-left Labour leader Jeremy Corbyn, but it instead cost them the majority and forced Tories to form a confidence and supply agreement with the Democratic Unionist Party (DUP), a Protestant party in Northern Ireland committed to keeping Northern Ireland part of the U.K. (known as Unionism). This agreement rests on the condition that the Conservatives keep an open border between Northern Ireland and Great Britain after Brexit. Meanwhile all sides wish to keep an open border between Northern Ireland and the Republic of Ireland to uphold the Good Friday Agreement, a pact which ended decades of armed conflict between Irish Nationalist militants who wanted Northern Ireland to secede from the U.K. and join the Republic, and the British Government and unionist militants.

The draft treaty May presented this week is largely viewed as a political “win” for the EU leadership in Brussels—more accurately, for the European Commission, the de facto executive branch of the EU organization. The Brexiteer and ERG goal has been to reassert British control of its commerce and border enforcement. The EU wants tariff-free trade, regulatory control over much of the U.K. economy, and the de facto annexation of Northern Ireland.

At least as a member of the European Union, the U.K. has influence over which rules and laws the union must follow, but upon leaving, the U.K. loses this power. What the proposed treaty does is perpetuate—with no clear end—Britain’s new role as a subject of the EU. The proposal says that at the end of the current transition period, if there is no agreement, the U.K. would enter a customs backstop where all of the U.K. would still remain in the free-trade customs union with many of the old restrictions, but with certain extra conditions on Northern Ireland. To keep an open border between Northern Ireland and the Republic of Ireland, Northern Ireland would have to keep the same regulations as the rest of the EU. The different governing rules between Northern Ireland and the rest of the U.K. would act as a subtle economic border. The alternative is to perpetuate the transition period, and that gives the EU the opportunity to reassert control in a more politically favorable climate.

Only 16 percent of British citizens support what May has brought before Parliament. She has managed to anger the hard Brexit supporters in her party, anger the Democratic Unionist Party (DUP), and give the Labour Party plenty of opportunities to attack her poor governance. While the Prime Minister has deployed an extensive public relations campaign for the agreement, the ERG is adamant that she will face a no-confidence vote.

When May began the negotiations, she often said, “no deal is better than a bad deal,” and that was an important statement because even if certain economic benefits were lost, the government would be acting on the will of the people. May’s draft proposal is a bad deal, a really bad deal, but she’s holding it out as better than no deal. And while the Labour Party and the Liberal Democrats (Britain’s third party, holding a small number of seats) solicit votes from the pro-EU half of the British population, more people voted to exit.

After the Cabinet resignations, it seems unlikely that the proposal will make it through Parliament. Instead, the Prime Minister may have just filed her own pink slip. According to Conservative Party rules, if 15 percent of Theresa May’s party (48 members) turn in letters of no confidence to the “1922 Committee”—essentially the internal party caucus—she will have to face a challenge to keep her party leadership and Premiership. This is what the ERG is hoping to accomplish in response to this unpopular Brexit proposal.

If that happens, who will take control? At this point, nobody knows. And even if May survives a party challenge, she may still face a defeat on the treaty vote, which could be taken as a vote of no confidence by Parliament—an immediate trigger for a new government and likely a new election. Another election could give Labour more seats or bring about Prime Minister Corbyn: In that case, there would be hardly any telling whether Brexit would even happen, much less what the final Brexit will look like.