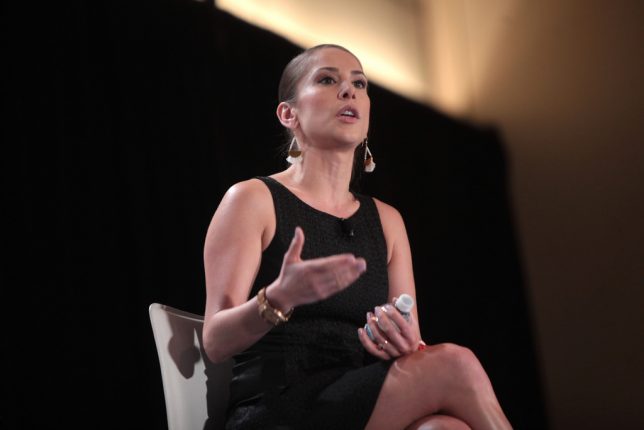 TYT’s audience is roughly 80 percent men between the ages of 18 and 34. In their attempts to appeal to these millennials, TYT’s talent, which from the network’s early days has been largely white and male, is frequently sophomoric and decidedly non-progressive. Sexual inuendo and banter, in particular, have gotten Uygur and his comrades in trouble with the Left. In December 2017, Uygur and his TYT co-founder David Koller were kicked out of Justice Democrats, an organization they helped launch earlier that year, after The Wrap publicized “disturbingly sexist and racist” blog posts the two had written in the early 2000s on a pre-TYT website simply called  Young Turk. “The words and conduct in Mr. Uygur’s and Mr. Koller’s posts degrade what it means to be a Justice Democrat,” executive director Saikat Chakrabarti said. “We do not feel that Mr. Uygur is fit to lead or participate in an organization that truly believes women’s issues and the issues of black and brown people are all of our issues.”

Uygur offered a qualified public apology. “The stuff I wrote back then was really insensitive and ignorant,” he confessed to The Wrap. “And I deeply regret having written that stuff when I was a different guy.” The TYT CEO then explained that he was “still a conservative” at the time. A deeper dive into Uygur’s Young Turk posts, however, suggests otherwise. While it is true that in his early posts Uygur referred to himself as a Republican, much of his writing would not qualify as strictly conservative, especially his defense of homosexuality and abortion and his paean to President Bill Clinton’s attorney general, “The Goddess Reno.”

While Justice Democrats focused exclusively on writings from the early 2000s, Uygur and team have provided plenty of other opportunities for progressive concern since. TYT, for instance, has run many “Top 10” segments, in which Uygur either presents his own list of “Hottest Women” or comments on the lists of others, including Maxim’s Top Ten Hottest Women, AskMen’s Top 10 List, Houston Press’s Hottest Female Sex Offenders, and E! Top 10 Sexiest Women. Uygur’s praise for various models and celebrities on his own lists has included the mundane “smoking hot,” the goofy “her upstairs is quite luxurious,” and the downright demeaning “tits on a stick.” His criticisms of women who did not make his lists have included fat-shaming comments such as: “she has an issue with the thighs” and “she has blown up.”

In 2016, Uygur led a three-man panel on “how to pick up chicks,” in which Uygur described his conquest of a 19-year-old beauty pageant winner when he was 28, and his colleague Hasan Piker bragged about being a “total misogynist.” In another video, “Bro Tips,” Piker coached young men on how to get women in bars to have sex with them. After some initial repartee with your target, advised Piker, “It’s time to separate her from her herd, meaning her crowd of girlfriends that are going to do their best to c**kblock you because they’re fat and lonely.” In a segment devoted to “checking out women,” Uygur cackled as Wesley Clark, Jr. boasted, “I’m not wealthy at all, and I never had a problem scoring p***y in my life.” Further tarnishing TYT’s progressive image is an unsettled 2017 racial discrimination complaint against the network and a 2017 sexual assault allegation against one of the network’s reporters.

The most egregious anti-female performance at TYT, however, was Anna Kasparian’s on-air rant against conservative women after the 2016 presidential election. “I have no respect for women who voted for Trump,” she stated flatly. “I don’t think you’re a single-issue voter,” she continued, “I just think you’re dumb . . .  I think you’re f**king dumb . . . you’re an idiot.” Concluding, Kasparian told 41 percent of women voters, upwards of 30 million of her fellow American women, that they had voted “against your best interests.”

Uygur and team have further eschewed both progressivism and transparency in their bid to “get money out of politics.” In 2010, Uygur founded Wolf-PAC, an independent expenditure-only political action committee. Wolf-PAC is partly funded by TYT, and Uygur frequently solicits donations on his TYT shows. David Koller currently serves as treasurer of the organization and the address listed for Wolf-PAC is the same address as TYT’s. Wolf-PAC’s mission is to mount pressure on state legislatures to vote for a constitutional convention for the purpose of proposing a 28th Amendment limiting campaign donations to $100 and establishing public financing for all elections. This type of committee is also known as a Super PAC, the very type of organization that Uygur and other leftists despise because, under current law, these PACs may receive unlimited contributions from individuals and corporations.

Critics have pointed out that Uygur could have simply established a regular political organization or non-profit to achieve his goal. He did not need to create a Super PAC. Uygur has responded that if candidates can use PAC money “to fight for their issues or, I would argue, to buy off politicians, we can use money on the one issue we care about, which is getting money out of politics.”

Also raising eyebrows, is Wolf-PAC’s inordinate spending on salaries, travel, and operating expenses, while contributing very little by contrast to political campaigns. According to filings with the Federal Elections Commission, during the 2016 and 2018 election cycles Wolf-PAC devoted nearly 80 percent of its disbursements to salaries and administrative costs. Quipped Jonah Bennett in the Daily Caller, “Cenk Uygur is so intent on keeping money out of politics his own PAC spends virtually all its donor money on personnel and operating expenses.”

As a college student at the University of Pennsylvania in the early 1990s, Uygur was apparently still a genuine conservative. In The Daily Pennsylvanian he wrote a persuasive criticism of his school’s affirmative action policies concluding with, “What if we just accepted the best students independent of their ethnicity?” Uygur also penned an apologia for the pro-life position, which included a touching personal story about his grandmother and the difficult choice she made to give birth to Uygur’s father. Uygur’s essay included the following assessment of pro-life motivation:

People who argue to stop abortions do not really have a secret agenda to take away the rights of women. They truly believe that the life process starts at conception rather than a vague and continually changing definition of viability outside the womb that the court has arbitrarily set. They truly believe the fetus is alive, and that removing it would be the equivalent of killing a living person. That is a heart-felt view on what they see as a life-and-death situation. It is not something to be derided as an attempt to subjugate women.

It is curious that the same man now runs a network that is unapologetically pro-abortion and whose colleague accuses pro-lifers of being motivated by a desire to “punish women.” Equally strange is Uygur’s utter disdain for those with whom he disagrees: “Donald Trump and the entirety of the Republican Party don’t like brown people… they’re racists who want to protect a white nationalist state.”

Not exactly the honesty that Uygur promised to bring to the debate.