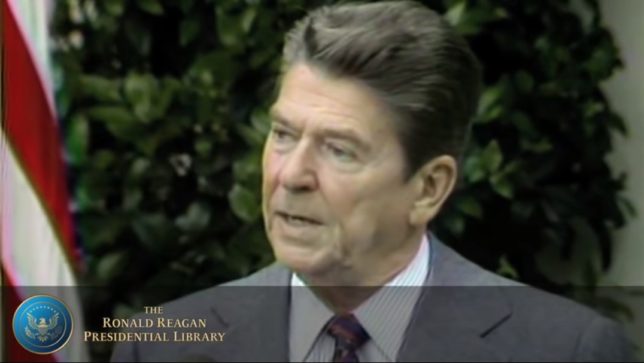 President Ronald Reagan announcing on August 3, 1981, that he will terminate air traffic controllers who do not return to work within 48 hours. Source: Ronald Reagan Presidential Library.
by Michael Watson

Before the coronavirus pandemic, the most important labor action by a government worker union in US history was in 1981, when the Professional Air Traffic Controllers Organization (PATCO) called an illegal strike against the Federal Aviation Administration during the Reagan administration.

President Ronald Reagan responded decisively. Holding to President Calvin Coolidge’s maxim that “There is no right to strike against the public safety by anybody, anywhere, at any time,” Reagan fired the striking controllers, replaced them with military controllers and non-union civilian supervisors, and barred strikers from federal employment.

Compare President Reagan’s decisiveness to the weak-kneed response of the nation’s governors to the de facto strike action of the teachers unions. With few exceptions—Florida’s Ron DeSantis, Iowa’s Kim Reynolds, and Rhode Island’s Gina Raimondo among them—governors and local officials have more or less allowed teachers unions to conduct a mass “sick out.” Their strike has kept schools closed and families in lockdown, ostensibly because of the pandemic, but more plausibly as an extortionate political action before a presidential election. Reagan’s decisiveness in dealing with the unions, even in jurisdictions that ban government worker strikes, has been entirely absent.

And let’s be clear: Research shows that teachers union power, not the rate of coronavirus infection or deaths, is closely associated with whether classrooms will open or remain locked down. By one model, “A 10 percent increase in union power is associated with a 1.3 percentage-point lower probability of reopening in person.”

While political leaders have alternately dithered, capitulated, or pandered to the might of the National Education Association and American Federation of Teachers, parents have taken action. According to one poll, nearly 40 percent of parents are not enrolling their children in the school they would have attended but for the pandemic. Anecdotal stories suggest that parents are instead enrolling their children in private schools or making independent home-school arrangements. Yet state governments aligned with teachers unions are passing legislation to prevent student and parent independence from affecting school system budgets.

What may be happening—the data are spotty, polls are unreliable, and teachers unions never need an excuse to demand more money—is that the spinelessness of public officials has made parents the force to counter the teachers unions strike.

Throughout the COVID crisis, teachers unions have operated on a simple premise: “Give us what we want, or your kids get it.” Much like the PATCO strikers who thought their chokehold on a key economic node gave them incalculable leverage to demand raises of 31 percent amid a recession, teachers unions have operated on the assumption that no force can resist them, so they can make extreme political demands from defunding the police to public welfare for illegal immigrants.

But what if they don’t have the leverage they think they have? In the case of the air traffic controllers, President Reagan called in the military controllers, air travel continued, and no major air disasters happened. PATCO’s leverage was ephemeral, and their strike failed.

What if parents show that they can break the strike—whether by developing “pandemic pods,” defecting to private schools, or adopting home-school curriculums rather than accepting whatever online drivel teachers unions and their captive municipalities are offering?

The public might be able to repeat Reagan’s victory.

A version of this article was published in the Washington Times on September 13, 2020.