Where Is, Repeat Where Is, America’s Political Leadership? The World Wonders. 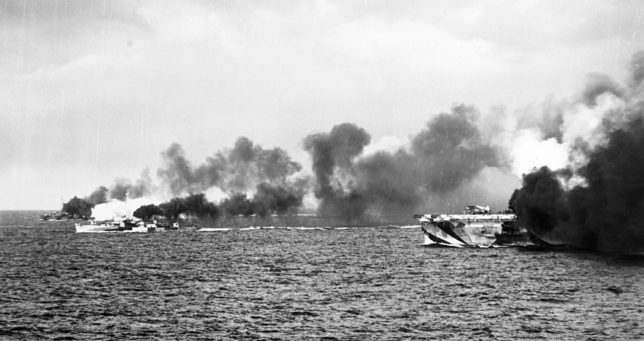 At a crucial juncture of World War II in the Pacific, Fleet Admiral Chester Nimitz had a question for his subordinate Admiral William Halsey: “Where is, repeat where is, Task Force 34? The world wonders.” At stake were the American landings on the Philippine island of Leyte, which faced the might of the remaining Japanese fleet, including the Yamato, the mightiest battleship ever built.

Task Force 34 was nowhere near where it needed to be, leaving the “tin can sailors” of Taffy 3 between the tens of thousands of American soldiers landing on Leyte and the Yamato’s task force of four battleships and eight cruisers. Taffy 3—a support unit of six small escort carriers, three destroyers (nicknamed “tin cans” for their lack of armor), and four destroyer escorts—was entirely unprepared and overmatched for fleet action. Yet by a miracle and the courage of men such as Commander Ernest Evans, awarded a posthumous Medal of Honor for his valor commanding the USS Johnston, Taffy 3 turned back the Yamato and the Japanese force.

From Sailors to Sick-Outs

So what does a World War II naval battle have to do with the ongoing shutdown of schools by a teachers union–led sick-out for goals entirely unrelated to protecting teachers from illness, explicitly including defunding the police, wealth taxes, bans on new charter schools, and public benefits for illegal immigrants? Well, one could cast the NEA, America’s largest labor union and a $373 million-per-annum political advocacy behemoth in the role of Yamato; the AFT, its smaller AFL-CIO-affiliated counterpart with radical affiliates in Chicago, New York, and other major cities as the rest of the Japanese task force; and the American parents and children confined to their homes by the union sick-outs in the role of their grandfathers on the Leyte landing beaches—defenseless citizens cast into battle against the vicious might of their highly professional adversaries.

And the science is clear: Children are at minimal risk of complications from the pandemic coronavirus. In most states, the number of people under 20 who have died from COVID can be counted on one hand. Nationwide, the number of 5–14-year-olds who have died from COVID as of August 19 is 27. The deaths are tragedies all, but barely qualify as a statistic. Data from Sweden, which did not close primary schools despite a major outbreak of COVID in the spring, show that teachers had a risk of infection from COVID not substantially different from or even substantially less than the general population.

So, who can we cast as Taffy 3? One of the few public officials even making an audition for the role is Iowa Governor Kim Reynolds (R), who has fought local school boards intent on capitulating to union demands to keep schools locked down. But perhaps the more consequential player at the sparsely attended casting call is New York Mayor Bill de Blasio (D).

I’m not kidding. I come to praise—not bury—the labor union–backed, aggressively “woke,” committed left-wing former Democratic presidential candidate who once supported the Communist-aligned Sandinistas. He has taken a harder line against the most consequential labor action by a government-workers union since the PATCO strike of 1981—if not ever—than most ostensibly conservative leaders.

It truly is remarkable. Mayor de Blasio publicly recognized the insufficiency of “distance learning”—teachers unions’ demanded “solution” to their refusal to come in to work—saying, “Imagine kids going a full year without the best quality education that can only be provided in person, and the support that educators and school staff give.” He noted that other government workers such as bus drivers, subway conductors, and health workers have done their jobs despite observable risks far higher than what teachers face.

His conclusion: “Public servants show up and serve people: that’s what our constituents depend on.”

The Spirit of Admiral Halsey

De Blasio has vowed that the schools will open, at least part-time, in person on September 10. Mike Mulgrew, leader of the New York City teachers’ union, has vowed that they will not. Every incentive except good public policy and the education of New York’s children aligns with de Blasio ultimately capitulating, but the whole country should root for him to channel the spirit of Commander Evans and fight against the seemingly impossible odds to victory, whatever the cost. Our children’s education, mental health, and even very lives may depend on his success.

That brings us back to the nation’s governors and other local officials, and the spirit of Admiral Halsey. Nimitz sent his now-famous message because Halsey had taken the main American battle fleet including Task Force 34 to chase the glory of destroying the Japanese carrier force, which was a decoy lacking both the aircraft and pilots to pose a significant threat. Halsey took that bait, and the results were nearly catastrophic.

So what glory are the other public officials chasing while leaving students and parents vulnerable to the radical-Left demands of the teachers unions? In the words of the anti-decryption language appended to Nimitz’s message to Halsey, “The world wonders.”