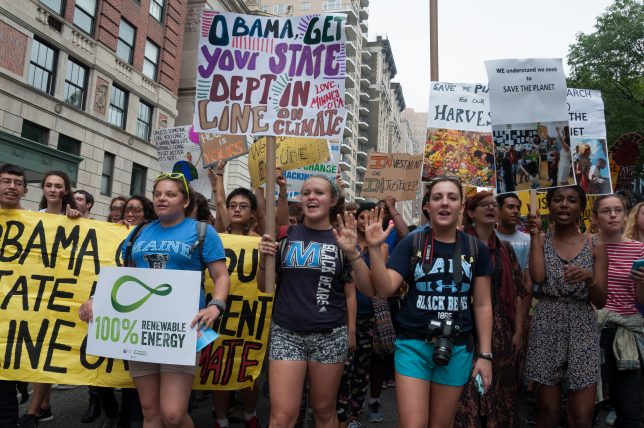 Over the weekend, the Left returned to Washington, D.C. to protest—on a temperate April day–the crisis of global warming. How little these doomsayers have changed since the last People’s Climate March was held in 2014. It’s still the same motley collection of radical progressives and big government statists masquerading as concerned climatologists that my colleague Dr. Steven Allen chuckled at in 2014 (see his report here).

A brief glance at the March itinerary reveals a thin veneer of environmentalism disguising an otherwise far-left agenda, under the grandiose claim that these People are “fighting injustice.” As with the folks at the March for Science held the weekend before, climate change isn’t the only thing that has driven this ostensibly organic assembly to the streets. They have a bigger target: “Trump has made it very clear that he is just another Swamp Politician working for the Billionaires,” reads the subhead of a People’s Action workshop. (Never mind the billionaires funding the March groups, like Tom Steyer and George Soros.)

The theme of “resistance” permeated the entire event. “Indigenous communities are under attack for protecting Mother Earth,” asserted one event promotion. “We will gather in front of the Trump Hotel to dance in unified resistance to the destructive policies of this administration,” it boldly proclaimed. But just to make sure that would-be dancers remembered their place in the left-wing hierarchy, it sternly added: “(Please respect Indigenous protocols. Indigenous drummers only.)”

On occasion, the People’s Climate March agenda managed to touch more specifically upon the environment. When it did, however, it came no closer to reality.

“Challenging the U.S. War on the Atmosphere: How We Fight Back,” read one workshop promo. “Sweet Potatoes Not Pipelines,” cried another. A third advertised “Recipes for Resistance” for parties interested in advancing “Plant-based action.” People were invited to join Senators Jeff Merkley (D-Ore.) and Bernie Sanders (I-Vt.) to launch a bill which promises to “completely phase out fossil fuels and transition our country to 100% clean renewable energy for all by 2050.”

The actual march itself was divided into specialist groups, each with a different progressive agenda line item. With names like “Creators of Sanctuary,” “Guardians of the Future,” “Reshapers of Power,” and “Protectors of Justice,” one might almost get the impression they were auditioning for a part in the next Marvel Comics flick. But these weren’t your average superheroes.

Like the thousands at the 1938 Nazi rally in Madison Square Garden, these were not discerning revolutionaries. In fact, just about anyone who opposed the far Left’s favorite bogeymen–free speech, inexpensive energy, organized religion, business, and actual science–was welcome to join. And not to worry, iffy credentials and dubious connections have never gotten in the way of a good protest.

Reading this list, an observer could be forgiven for thinking the People’s Climate March was anything other than a symposium for the extreme Left. As with the Women’s March and the March for Science, this march is a cover for a broader agenda designed to grow government, shrink individual liberties, and enrich an elite few. How little things change, indeed.