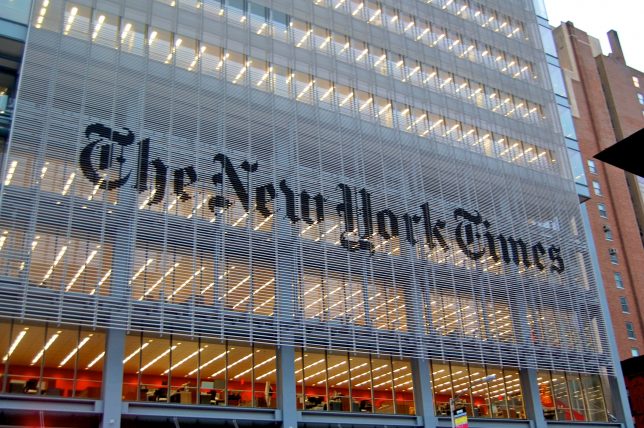 Acknowledging an embarrassing mistake in its August 7 front-page article, the New York Times—in what appears to be an attempt at fear-mongering rather than producing news—was forced to revise a part of an article aimed at casting the Donald Trump administration in a climate change-denying light for supposedly suppressing a report detailing man-made climate change.

Reporter Lisa Friedman received criticism for her original claim that the Times first made the report available to the public. The criticism subsequently forced the Times to issue a correction admitting that the Internet Archive had already made the report accessible as far back as January, unhampered by the Trump administration. The Times’ cover-up, which involved switching copies of the climate report, did not really make the correction look all that innocent.

Friedman’s rhetoric implies the Trump administration is waging “war” on science itself, assaulting what should be free and open knowledge in the vein of any repressive authoritarian regime seeking to deceive citizens. As a result, the article prompted a silly firestorm on social media, even featuring ridiculous tweets from Al Gore and Gizmodo. 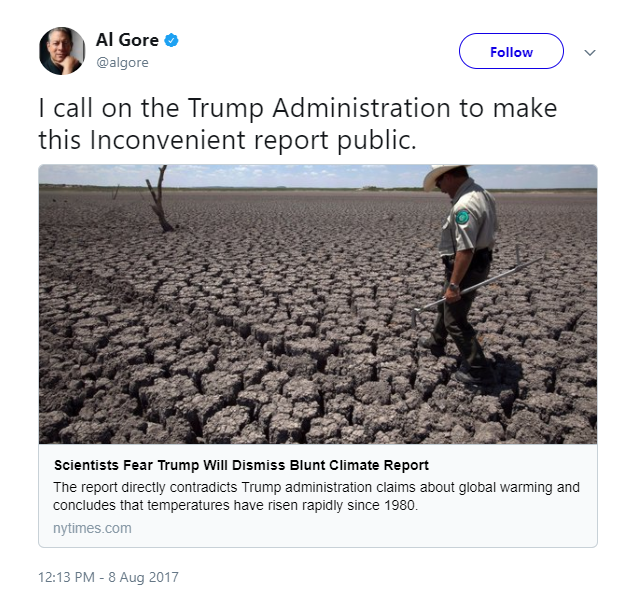 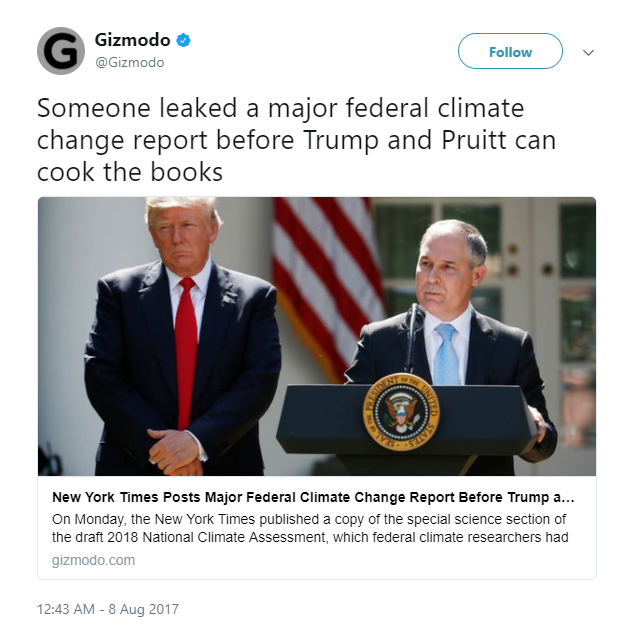 Adding to the embarrassment for Friedman, National Review points out, “the paper’s hyperbole about a government climate report” was exposed “by scientists who were quoted in the article itself.”

Katharine Hayhoe of Texas Tech University and Robert Kopp of Rutgers University, both lead authors of the report, seemed perplexed by the Times’ “news.” Kopp questions the hype in an even-keeled tweet:

“It’s not clear what the news is in this story; posted draft is public review draft from Dec, and WH review hasn’t yet missed Aug 18 deadline.”

Four co-authors of the science assessment… said they have not heard of or witnessed any attempt by the White House to suppress or censor the scientific document… “It was under the radar and we were fine about that,” one author told AP on Tuesday.

Understandably, Rep. Lamar Smith (R-TX), chairman of the House Committee on Science, Space, and Technology, was not too happy with the New York Times:

The alarmist climate media is at it again. In its latest reporting of a so-called leaked climate assessment, the New York Times relies on exaggerated statements and false allegations of cover-ups in order to push an agenda. To treat a climate report that has been public for months and is currently undergoing official comment by numerous federal agencies as a final document does a disservice to the American people.

Until the White House finishes its review of the report, perhaps the New York Times could instead focus its front page on actual news stories that immediately affect Americans. After all, a free, accurate, and objective press is widely regarded as the cornerstone of a free society and integral to upholding an informed public—as opposed to a venue for intentionally stirring up fear and anger over that which is unknown or uncertain.