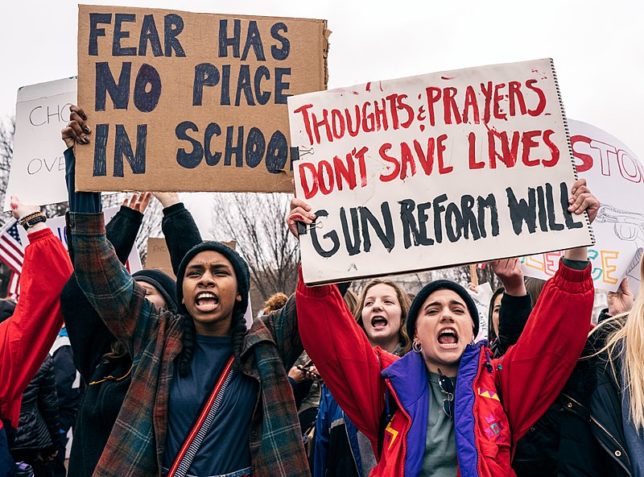 You may have seen the Capital Research Center’s groundbreaking report on Arabella Advisors and its four sister nonprofit organizations, the New Venture Fund, the Sixteen Thirty Fund, the Hopewell Fund, and the Windward Fund. These four nonprofits represent an immense concentration of advocacy dollars. Of the four, the New Venture Fund is easily the largest; it also has the most fiscally sponsored projects.

One newly examined thread in the vast web of left-wing New Venture Fund “projects” includes gun control. At first blush, the Hope and Heal Fund clearly ticks the boxes of a New Venture Fund Project: a D.C. headquarters, leadership with ultra-liberal bona fides, and high-powered donors with an agenda. This project seeks the end of gun violence in California—but it offers no pragmatic solutions and only regurgitates tired statistics.

The Hope and Heal Fund might be “working to stop gun violence in California,” but its headquarters is based on the other side of the country. Now, it may be possible to organize remote work that helps with the problem of gun violence in California, but wouldn’t it be more effective—not to mention efficient—to set up shop in the geographical vicinity of California? This is hardly unusual for projects fiscally sponsored by the New Venture Fund.

The executive director of Hope and Heal, Brian Malte, previously worked for 15 years as the senior national campaign advisor for the Brady Campaign to Prevent Gun Violence, a left-leaning policy advocacy organization that calls for wide reform to federal firearms policy to infringe on Americans’ rights to own a firearm. Before working for the Brady Campaign, Malte worked at the Giffords Law Center to Prevent Gun Violence, an organization formed in the wake of a bay area shooting in 1993 and later renamed in honor of former U.S. Congresswoman Gabby Giffords who was shot in an attempted assassination in 2011.

Hope and Heal Fund, the Brady Campaign, and the Giffords Law Center all use the same political playbook: using firearms and the Second Amendment as emotional fuel to flip Congressional seats rather than doing anything meaningful to prevent gun violence. Hope and Heal’s entire educational repertoire is premised on limiting Americans’ Second Amendment Rights, which is more political than purely educational. When you consider that California, a state with many swing-districts, is the target, Hope and Heal’s operation appears to care more about electoral outcomes than public safety.

The so-called solutions that Hope and Heal Fund has entertained include grants to Advance Peace, an organization that wants to pay (or bribe?) potential shooters up to $1,000 a month to dissuade them from shooting people, and funding a study that found that heterosexual people have a higher chance of owning a gun than those who identify as LGBTQ.

Instead of advocating for a reduction in gun ownership or potentially infringing Americans’ right to bear arms, Hope and Heal could take pragmatic approaches to gun safety. CRC’s Steve Warner outlined how certain organizations and programs address gun violence better than politically motivated programs such as the Hope and Heal Fund. The National Rifle Association, American Foundation for Suicide Prevention, and National Shooting Sports Foundation all offer educational programs to limit deaths related to firearms like teaching children not to play with unattended weapons and helping suicidal gun owners to seek treatment for mental illness. These solutions save lives without limiting freedom.

Donors with a Larger Agenda

Hope and Heal Fund is closely connected with multiple left-leaning organizations such as the California Wellness Foundation (“Cal Wellness” for short), a left-leaning group that gives to strictly progressive and left-leaning entities and projects. Cal Wellness has made large donations to so-called gun control organizations such as (you guessed it) Everytown for Gun Safety, Giffords Law Center to Prevent Gun Violence, and Brady Center to Prevent Gun Violence.  Hope and Heal just continues the giving trend.

Everytown for Gun Safety claimed to have spent $25 million during the 2018 midterms to prevent national concealed carry from becoming legal. This meant giving overwhelmingly to Democratic candidates. The Brady Campaign (the 501(c)(4) arm of the Brady Center), while claiming to be a nonpartisan organization, spent nearly $400,000 between 2002 and 2016, with only 1 percent of the total benefitting Republican candidates. Similarly, American’s for Responsible Solutions, the affiliated PAC of Giffords Law Center which also claims to be nonpartisan, spent an overwhelming 94 percent of their political donations on Democratic Candidates in 2016.

These organizations are all highly political, taking advantage of the raw emotions of the victims and their families caused by shootings.

Hope and Heal Fund falls into the same boat.

All in all, the Hope and Heal Fund doesn’t appear to be taking its educational mission very seriously. While the project doesn’t specifically lobby or campaign for certain political candidates, it exists to stir support on the Left against the Republican party. If Hope and Heal is serious about reducing gun violence it will consider embracing solutions outside a ban on firearms.