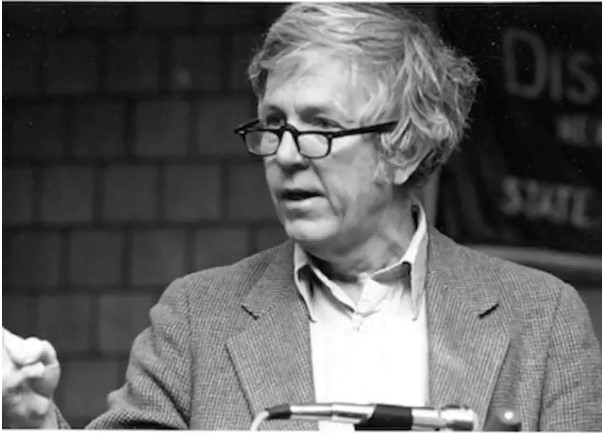 Here is how the group describes itself on its website:

The Democratic Socialists of America (DSA) is the largest socialist organization in the United States. We believe that working people should run both the economy and society democratically to meet human needs, not to make profits for a few. We are a political and activist organization, not a party; through campus and community-based chapters, DSA members use a variety of tactics, from legislative to direct action, to fight for reforms that empower working people.

DSA was created in 1982 by the merger of the anti-Vietnam War group, Democratic Socialist Organizing Committee (DSOC), and the smaller New American Movement (NAM). DSOC was founded by socialist activist Michael Harrington in 1973. NAM grew out of the ashes of the rowdy antiwar group, Students for a Democratic Society (SDS), which collapsed at the end of the 1960s, giving birth to the terrorist Weather Underground Organization of Bill Ayers and Bernardine Dohrn.

Harrington reportedly got his start in left-wing activism with Dorothy Day’s Catholic Worker group in New York City. Probably the most prominent American socialist since Eugene V. Debs, Harrington wrote the seminal 1962 book, The Other America: Poverty in the United States, which had a dramatic influence on American social policy. Some credit it with inspiring President Lyndon Johnson’s War on Poverty. Harrington also provided commentaries on National Public Radio in the 1980s, which allowed him to reach a fair-sized audience.

According to David Walls in The Activist’s Almanac, published in 1993 by Fireside,

But there is a possibility that the activism of DSA members may spur a backlash and bring DSA’s influence on the Democratic Party to an abrupt end. For example, DSA activists use Saul Alinsky-approved tactics to get in the faces of their enemies.

“How can you enjoy a Mexican dinner as you’re deporting and imprisoning tens of thousands of people who come here seeking asylum in the United States?” a DSA member yelled at Nielsen. “We call on you to end family separation and abolish ICE.” DSAers also chanted, “Kirstjen Nielsen, you’re a villain, locking up immigrant children.”

The Washington, D.C., chapter of DSA broadcasted video of the protest on social media.

One of the disrupters has been identified as Allison B. Hrabar, a paralegal who works in the Technology and Financial Services Section of the Department of Justice’s Antitrust Division. DOJ is reportedly investigating the incident but at time of writing hasn’t taken action against Hrabar, who studied at Swarthmore College.

“Oppressed people have never been given their rights by asking politely,” Hrabar said. “Kirstjen Nielsen is not going to be convinced by us politely saying ‘could you maybe not separate children from their families? Could you maybe stop detaining and deporting migrants who have done nothing wrong?’”

No party? No problem

While the DSA may not be a political party, it still aims to elect socialists, as its national director Maria Svart acknowledged to CNN earlier this year.

Asked to explain the fundamental difference between the politics of DSA and those of Bernie Sanders, she said:

Well, we have one foot inside the Democratic Party and one foot outside the Democratic Party in the same way we have one foot inside electoral politics and one foot outside. Our vision is to build a mass, multi-racial, working-class movement that brings people together across our differences and demands that our society and our economy be run democratically. Most of us believe that this will not work under capitalism. Our north star is totally transforming the system, even though our immediate vision and our immediate political program is similar to Bernie Sanders’. What’s different is we want to democratize everything, ultimately. That’s the goal.

It is easier to advance socialism by not making the DSA a full-fledged political party because there are “institutional barriers” for any new party, Svart said.

But we also want to maintain the flexibility of being within the left wing of the Democratic Party, but also being outside of it. We see our role now as shifting the Overton window—shifting the acceptable discourse, while also organizing people and building concrete power with a politically aware grassroots base that understands who the enemy is and is willing to hold politicians accountable. But that flexibility is important.

The DSA has two nonprofit arms. One is a social welfare/lobbying organization; the other is an educational organization. Its youth wing is called Young Democratic Socialists. DSA’s quarterly journal is called Democratic Left. It also publishes Religious Socialism, which the group describes as “a publication dedicated to people of faith and socialism.”

Democratic Socialists of America Inc. is DSA’s New York-based 501(c)(4) nonprofit. It describes its mission as “public education about democratic socialism,” according to its most recent publicly available IRS filing from 2016.

In this reporting period, it had six employees, 600 volunteers, and net assets of $557,596 at the end of the year. Maria Svart is listed as the group’s national director, drawing an annual salary of $68,338.

DSA is governed by a 16-person board of directors known as the National Political Committee (NPC) that is elected every two years by delegates at DSA’s National Convention. “The DSA Constitution requires that eight slots of the NPC be reserved for women, and that at least five of the NPC slots be reserved for people of color,” the group’s website states.

DSA’s 501(c)(3) sister organization is Democratic Socialists of America Fund, Inc. On its most recent publicly available IRS filing from 2016, the group stated that its “primary exempt purpose” was to “promote understanding of democratic soci[alism].” Svart was identified as its executive director but no salary was provided for her position. The 501(c)(3) disclosed a 2016 budget of $75,502 and net assets of $90,633 at year’s end.

DSA has a handful of small political action committees at the national and local levels. Democratic Socialists of America, Inc. PAC reported having just $659.01 on hand as of Jan. 1, 2018. It reported independent expenditures of $87,266 to the Federal Election Commission in a disclosure document from Dec. 31, 2016. Unsurprisingly, almost all of the money ($86,660) was spent to support Bernie Sanders’ presidential candidacy.

In the Keystone State, there is something called the Political Action Committee of the Pittsburgh Chapter of Democratic Socialists of America, known as Pittsburgh DSA PAC. According to the Pennsylvania Department of State, the PAC raised $2,884 and spent $1,919.84 this year, which includes trivial sums spent to support DSA-endorsed candidates for the Pennsylvania House of Representatives, Summer Lee and Sara Innamorato.

There is also a Metro D.C. Democratic Socialists of America Solidarity PAC, known as MDC DSA Solidarity PAC. According to the Maryland State Board of Elections, as of June 15, the PAC had a bank account balance of $1,113.55. It reported taking in $720 in contributions, along with $1,000 from non-federal out-of-state committees. It was unclear from the legal filings what expenditures the PAC made.

DSA is on the rise because it is riding a wave of leftist discontent against the Trump administration and perhaps because Bernie Sanders popularized the “democratic socialist” label during his 2016 presidential run. (Perhaps our government-run K-12 schools and institutions of higher education also bear some responsibility for failing to teach the dangers of socialist principles or the history of the United States.) Barack Obama’s election helped to reduce some of the stigma traditionally associated with socialism, a development reflected in popular culture in the famous “We’re all socialists now” Newsweek cover story from early 2009. More recently, the Left’s hatred of President Trump has pushed DSA membership nationwide to a reported 45,000.

DSA may be growing, but it is still comparatively small in the world of left-activism. For example, the National Education Association (NEA) has 2.7 million members, and the radical Service Employees International Union (SEIU), which is strongly associated with Barack Obama, has 1.9 million members.

What is happening now is that DSAers from outside the formal party structure are causing huge ripples in the media ecology by tossing out Democrat office-holders in insurgent primary campaigns. DSAers have been succeeding at the state and local level, but they haven’t been knocking off Democrat office-holders in large numbers at the national level.

At the state level, for example, DSA-endorsed social worker Kara Eastman defeated Brad Ashford, a former congressman who was backed by the Democrat establishment, in Nebraska’s 2nd congressional district this May. She supports raising taxes, decriminalizing marijuana, and imposing universal background checks on gun purchases. “I’m tired of hearing Democrats don’t have a backbone, that we don’t stand for anything,” she said in a campaign ad. “That changes now!” Eastman faces incumbent U.S. Rep. Don Bacon (R) in November.

By contrast, at the national level, Ocasio-Cortez is the only DSA-endorsed candidate to take out a sitting U.S. congressman. While her victory is important and is clearly helping her shape party policy, it’s not quite the watershed event leftists build it up to be. It is more like an excuse, or permission, from the party’s radical electoral base to become even more radical.

Some might say there is no civil war raging within the Democratic Party. There is no reason to have one. Democrats, in this writer’s view, are already so far to port that there is not much farther they can go. As the Washington Post’s Dana Milbank observed :

Analyses indicate that first-time Democratic candidates this year tend to be more liberal than incumbents, but the entire party has moved to the left. There is no “civil war” within the party because no one is pushing back against the progressives’ rise—a rise that comes in reaction to Trump but also reflects the growing prominence of women, minorities and young voters in the electorate.

However, some Democrats are hedging their bets. Some longtime Democrat lawmakers have bristled at Ocasio-Cortez’s aggressive rhetoric and distanced themselves from it. Rep. Alcee Hastings (D-Fla.) seemed to urge the newcomer to take a deep breath. He told The Hill, “Meteors fizz out . . . What she will learn in this institution is that it’s glacial to begin with, and therefore no matter how far you rise, that’s just how far you will ultimately get your comeuppance.”

In the next installment of The “New” Left, learn how radical members of this group can be.