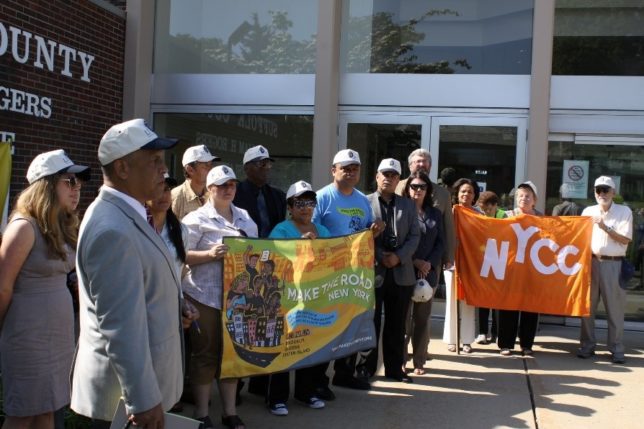 Another deeply politicized nonprofit that has received tens of thousands from Legal Services NYC in recent years is Make the Road New York, the advocacy group that orchestrated “most of the post-election mobilizations in New York City to drive the broader immigrant rights resistance.” Credit: longislandwins. License: https://bit.ly/36dvKIR.
by Robert Stilson

In addition to their own activities, some LSC grantees work with and even fund organizations that stake out dramatically partisan positions. According to tax filings from 2016, for example, Legal Services NYC provided nearly $140,000 to New York Communities for Change, a left-wing activist group whose mission is to “RESIST fascist and racist policies. . . . Our aim is to eliminate the ways capital has starved our communities of wealth for centuries.” Founded by former ACORN staffers, New York Communities for Change contends that “Corporate America has waged a war to destroy working people’s power” and that its role is to “fight against capitalism and centuries of oppression.” It’s hard to fathom why federal tax dollars should flow to a legal aid nonprofit that makes common cause with such a radical group.

Another deeply politicized nonprofit that has received tens of thousands from Legal Services NYC in recent years is Make the Road New York, the advocacy group that orchestrated “most of the post-election mobilizations in New York City to drive the broader immigrant rights resistance.” Make the Road New York also publishes a Deportation Defense Manual detailing ways “to protect targeted communities against the ongoing anti-immigrant attacks of the Trump administration,” deploys “rapid response” teams on rumors of U.S. Immigration and Customs Enforcement raids in the New York City area, and has supported bills allowing illegal immigrants to vote in state and local elections, serve on juries, and receive public benefits. It was also one of the signatories to a letter urging America’s CEOs to blacklist a slew of current and former Trump Administration officials from any future relationship with their companies.

California Rural Legal Assistance, which receives about 60 percent of its funding from the LSC, has in recent years given over $100,000 to ACT for Women and Girls, a “reproductive justice” nonprofit currently co-sponsoring legislation that would require all public universities in California to provide medication abortion as part of on-campus student health services. Other left-leaning recipients of California Rural Legal Assistance grants include Social and Environmental Entrepreneurs, a prolific fiscal sponsor whose mission is to “facilitate progressive change in areas of social and environmental justice”; Pesticide Action Network North America, a group that opposes many agricultural pesticides; and the United Farm Workers labor union. From 2013 to 2014, California Rural Legal Assistance gave over $400,000 to projects housed at the Tides Center, a major provider of left-of-center fiscal sponsorships.

These examples also illustrate ways that LSC grantees can serve purposes restricted by Congress without actually violating those restrictions. Grantees are prohibited from representing illegal immigrants (with some exceptions), advocating for abortion, organizing labor, and engaging in most political activities. Yet examination of the last few years of tax filings for just two LSC grantees reveals direct funding to nonprofits that explicitly and openly operate in all four of those areas. This is not to suggest any legal wrongdoing on the part of the grantees, but that some LSC grantees are far more than simple and apolitical sources of legal aid.

In the next installment of Legal Services Corporation, find out about options for reforming legal aid.