The Legacy of Todd Bol and His Little Free Libraries 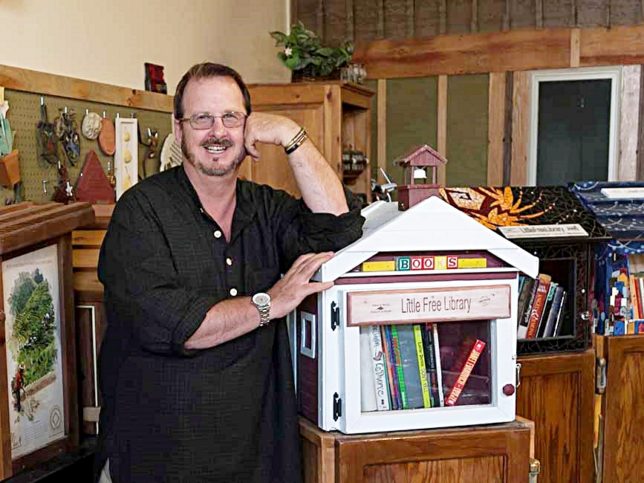 This article originally appeared in Philanthropy Daily on December 26, 2018.

You’ve probably never heard of Todd Bol, who died on October 18 at the age of 62. But he was one of the most significant social entrepreneurs of this century. Bol invented the Little Free Library whose tiny little bookshelves are in front yards across North America, inviting people to take a book for free and place a book in the bookcase in return.

In Bol’s Washington Post obituary, Harrison Smith notes that Little Free Libraries have only been in existence for a decade. But they are now part of urban life everywhere, with 75,000 of them around the globe.

“They stand inside Los Angeles police stations and at New York City subway stops,” Smith writes, “at prisons in Wisconsin and hospitals in Ireland, at a refugee camp in Uganda and a schoolyard in South Sudan.”

He decided to make a building that looked like a little schoolhouse but could be placed on a pole and put it in front of his house, filling it with books. People liked it, so he built a second one. And then, working with his friend Rick Brooks, he decided to make more of them. He ultimately vowed to build 2,540 of them, to outdo Andrew Carnegie’s 2,535 public libraries. Bol met his goal within four years.

Little Free Libraries spread organically. There was no national campaign to promote them. People heard about them, and then either sent off $150 to Little Free Library headquarters for a finished version (made by Amish craftsmen in rural Wisconsin) or $40 for the blueprints. People made their own versions, including some that looked like Doctor Who’s TARDIS.

In recent years, some social entrepreneurs have taken the Little Free Library idea and extended it to other things. In Fayetteville, Arkansas, Jessica McClard in 2016 started the first Little Free Pantry outside the Good Shepard Lutheran Church. She told ABC News that she makes sure to check the pantry every day because “it turns over in about 30 minutes” after the day’s supply of canned food is placed in the pantry.

In Lansing, Michigan, Adriana Flores, who recently got a master’s degree from the Michigan State University School of Social Work, created the E² Box to supply toiletries and feminine hygiene products (tampons, sanitary pads) not covered by government assistance. Why “E Squared?” Because, Flores says, that stands for “empathy and equity.” Right now there is only one E Squared Box, but Flores hopes to create more.

Todd Bol did a good deed when he thought up the Little Free Library. The success of the Little Free Library movement shows how a social entrepreneur who comes up with a simple idea can make our communities better. As Jacqueline Pfeffer Merrill once noted in these pages, “each little library success is an instance of ‘philanthrolocalism,’ which brings together a local community of donors and beneficiaries… it’s a global success achieved by thousands of small-scale efforts in local communities and neighborhoods.”