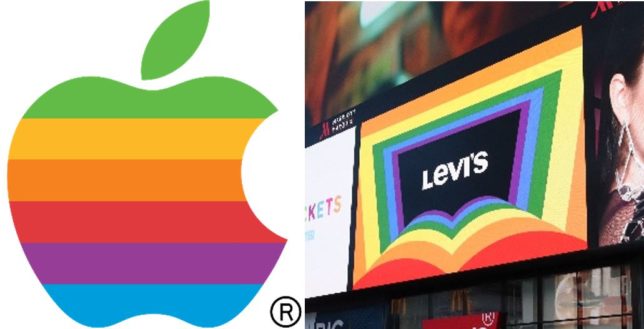 A few years ago, the Human Rights Campaign tweaked its Corporate index so that it said that a corporation must have an outward facing event—something like an advertisement—every year that promotes the LGBTQ community. Last year they tweaked is so that you must have three outward facing events to keep your perfect score. That’s why nearly 40 percent of advertisements during the last Super Bowl has LGBTQ in it. Apple-Credit: Rob Janoff. License: https://bit.ly/34KFqcK. Levis-Credit: Elvert Barnes. License: https://bit.ly/2CxqhQ4.
by David Hogberg

Hogberg: What other tools does the political Left use to pressure corporations?

One thing that is not well known is the “rating systems” that the Left employs against corporations. ISS, in fact, has an entire ESG rating system that it uses. Talk about a conflict of interest—they are rating these companies that they are then giving proposal advice on. There are dozens of these rating systems on the Left, that rate every ESG and CSR issue, and they are sometimes the tail that wags the dog in corporate America. One of the most influential is the Human Rights Campaign Corporate Equality Index. The Human Rights Campaign is a single-issue group on LGBTQ promotion. In my opinion, they are fully anti-religion and anti-life. Its index is now about 17 years old. Each year the Human Rights Campaign sends out a questionnaire like most of these indexes do every year. And they are the tail that wags the dog as to why so much LGBTQ advertising is on the air, and why so much money is behind the LGBTQ movement. And let me explain how and why. They get these companies beholden to a perfect score on the index. When I go to shareholder meetings, one of the things that most CEOs brag about is their rating on the HRC index. It will be in their promo materials. The HRC, of course, knows this. So what the HRC does every single year is tweak the index, so it acts as both a carrot and a stick. A few years ago they tweaked it so that it said that a corporation must have an outward-facing event—something like an advertisement—every year that promotes the LGBTQ community. So this could be an advertisement. Last year they tweaked is so that you must have three outward-facing events to keep your perfect score. That’s why nearly 40 percent of advertisements during the last Super Bowl had LGBTQ in it. If you wonder why the ads aren’t funny anymore, why they just promote the LGBTQ agenda, well, that’s one check on the list. That’s why during pride month, if you went to any corporate website, you saw the rainbow flag. That’s check two. They need to come up with a check three, or they lose their perfect score.

What would give you the lowest score? Donating to a conservative group. If you donate to the Alliance Defending Freedom, or the Heritage Foundation, or the Family Research Council, forget it. HRC will kill you on their rating. You’ll get the lowest score possible. The HRC also rates your corporate philanthropy. So guess what? Just search Google for “Human Rights Campaign” and “Corporate Sponsors.” A bunch of these companies that are rated by HRC fund them to be rated by them because that is a checklist item.

HB2 in North Carolina plays really well into this story. So HB2 is the so-called “bathroom bill” that required men to use the men’s bathroom and women to use the women’s. This was of course a reaction to an ordinance in Charlotte, North Carolina, that HRC was largely responsible for pushing that enabled men and women to use whatever bathroom they wanted to. The Left made HB2 a hot-button issue, and pushed corporate America to get involved. A lot of woke companies protested the idea that men should use men’s rooms and women should use women’s rooms.

HB2 was driving the state crazy. They lost the NBA All-Star game, they lost nine NCAA championships, numerous performers canceled concerts in the state. So a bunch of corporate leaders, the state GOP and the Democrat governor’s office got together and came up with a compromise. They agreed to table HB2 and go back to how things were. Well, Bank of America had two executives in that meeting. The Human Rights Campaign went apoplectic. They wanted the Charlotte ordinance to be state law, that every bathroom is open to every person based on their subjective feeling that day of whatever gender they may or may not be.

Now, HRC’s action didn’t surprise me—they are the extreme of the extreme. But Bank of America’s response was surprising. BofA apologized, said that HRC was right, that their executives should never have been in that meeting, and here’s $325,000 as an apology, will you please accept? And HRC basically told them to take a flier. HRC said we don’t accept your apology, we don’t need your money. And every year HRC rates BofA down because BofA was in that meeting. That’s how beholden corporate America feels to HRC.

HRC’s Index is just one example of how influential these indexes are. And where are we on the political right? Why aren’t we rating companies? The National Rifle Association is a great example. They have a rating system for legislators. Why don’t they put one out on how corporations engage with 2nd Amendment issues? It seems like a no-brainer.

The right needs to get into the battle. If we engage in this the same way the Left does, we can have just as much impact as they do.

In the next installment of The Left’s Next Culture War, find out more about corporate virtue signaling and how the definition of stakeholder is expanding.