The Left’s Next Culture War: Remaking the American Corporation One Board Room at a Time 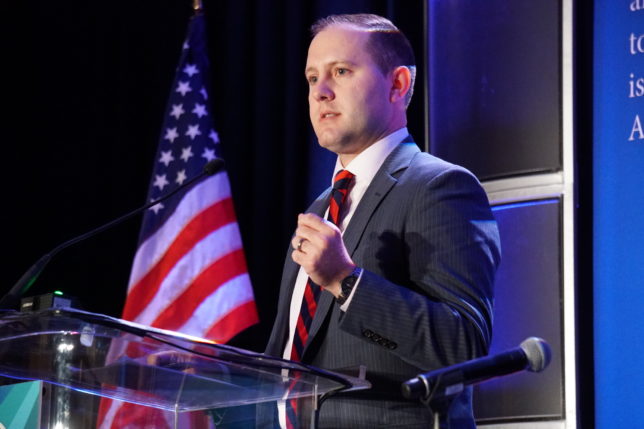 Justin Danhof: Corporate Social Responsibility—more commonly known today as ESG (environment, social, and governance) is the blanket term for left-wing investing/advocating designed to move corporate America further to the Left. These areas are defined and dominated by special interest left-wing “stakeholders.” The campaigns are coordinated from shareholder proposals, fake studies to prop up said proposals, media campaigns, social media campaigns, massive outreach to boards and managers, proxy advisory firms, and old-school protestors. Once a company capitulates to an ESG demand, they can expect even more requests as they’ve now revealed that they are amendable to such pressure.

In addition to pushing liberal policy on ESG issues, this platform is also used to limit conservative speech and funding. Under the governance banner, this activist network works to defund religious charities, conservative non-profits, pro-business trade associations, and conservative politicians. They often do so by labeling such organizations and individuals as “hate groups” of some kind and then pressuring companies not to fund hate. It’s a wildly effective effort and one conservatives need to pay close attention to.

Hogberg: How big is the effort by the Left on corporate activism?

There are probably 70 to 80 groups on the Left engaging in this, and it’s not just fringe activist groups. It’s state pension funds, actual asset managers—people who manage money for other people—and the unions. The unions like SEIU and the Teamsters are heavily involved. And then there are the true activist groups, like PETA. And they engage in a coordinated way.

Hogberg: Has shareholder activism gotten worse in the last 5-10 years?

Dramatically so. When we got into this a decade ago, whenever a shareholder proposal was filed, whether by us or by the dozens of groups on the Left that are involved in this, the average vote for the proposal was in the low single digits. It was usually two to three percent. Investors were usually shooting these things down.

Hogberg: What are proxy advisory services and what impact do they have on corporate activism?

Say you invest your money in a mutual fund at, say, Fidelity or T. Rowe Price. Mutual funds, of course, own stock in many companies. Now, when you invest in a mutual fund, you give away your right to vote on proxy statements to the mutual fund manager. What fund managers started doing a while back was, in effect, give away those rights to proxy advisory services. The reason is that fund managers would have to vote on thousands of proxy statements every year. Well, these proxy advisor services came in and said “We’ll do it for you. We’ll tell you how to vote on shareholder proposals.” So if you are the average investor with mutual funds, you are now two degrees separated from the vote.

The fund manager still has to sign off on the recommendation from the proxy advisory service, but unless they are going through and evaluating every recommendation, it is basically a rubber stamp. So what happened is that the Left took over the proxy advisory services, took over ISS and Glass Lewis. So now ISS and Glass Lewis support wholeheartedly almost everything that the liberal shareholder activists are pushing in corporate America. Again, to the point that seven or eight years ago all shareholder proposals got low support, in the single digits—both mine and the Left’s. Now the average proposal gets 24 percent of the vote—except my proposals. Mine still get low support. ISS and Glass Lewis never support my proposals. And it’s coordinated. Canadian pension funds own Glass Lewis. You think that they don’t work with other union pension funds? Of course, they do.

ISS and Glass Lewis have a lot of influence. Here’s an anecdote. Last year there was a shareholder proposal that was on the proxy statement of Amazon. And this was pushed by the SEIU and broad swath of liberal interest groups. It was on the diversity of a corporation’s board of directors. Of course, their version of diversity from the Left is bean-counting, affirmative action. It mandates that for every open board seat, you must interview a woman and an underrepresented minority.

The stated goal, to avoid groupthink on a corporate board, is perhaps noble. The means the Left is using to achieve the stated goal are ignoble. By saying that you must interview a woman you are saying that all women think alike based on their gender.

Amazon opposed that resolution. A left-leaning company with a left-leaning CEO said no. For six weeks after Amazon said no, the liberal media was hammering them, saying, “How dare Jeff Bezos oppose diversity! What is Amazon’s board thinking?” So I flew out to the Amazon shareholder meeting to publicly speak out against the proposal. Jesse Jackson was there to support it.

When I got to the meeting, the attorney at Amazon that I deal with on a pretty regular basis came up to me. He said, “I can bet I know why you are here today.” I replied, “Yes. I’m going to speak out against this ridiculous proposal. It’s racist and it’s sexist. And I think Amazon for once is doing the right thing by opposing it.” And he said, “Well, you should know that late last night the board adopted it. That’s our new policy.” I asked, “You’ve been pilloried in the press for six weeks. Why are you caving now?” And his answer was that ISS had not only recommended to their clients to vote for the proposal—and those recommendations are usually secret—but ISS also came out publicly in favor of the proposal. He said that once ISS came out publicly for the proposal, Amazon had to give in. So, one of the richest companies in the world couldn’t stand up to ISS. If that anecdote doesn’t tell you ISS’s power, then nothing does. That’s how strong ISS is, and they know it.

Now at almost every shareholder meeting where there is a leftist resolution that the company has not yet adopted, the person speaking in favor of the proposal starts his or her remarks with, “ISS and Glass Lewis support this proposal so you should get behind it.”

In the next installment of The Left’s Next Culture War, learn how shareholder activists use corporate rating indexes.