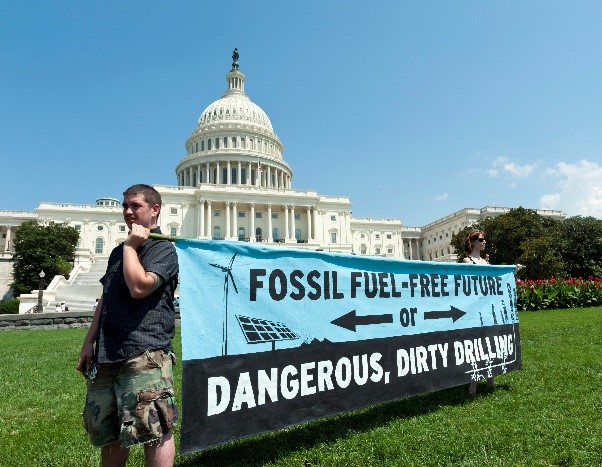 The tax-exempt organizations and foundations that power the environmentalist movement keep coming up with new commandments. One of its newer rules to live by: if you have a workplace pension, make sure the pension isn’t invested in anything to do with “fossil fuels”—that is, sources of energy such as coal, oil and gas. Credit: Jeremy Buckingham. License: https://bit.ly/34grFD5.
by Neil Maghami

Summary: American environmentalists have long promoted political cooperation with labor organizations. There’s at least one issue, however, where cooperation between the two sides proves problematic—and that concerns green demands for public sector pension plans to divest from fossil fuels. Those environmentalist campaigns leave some union members with an uneasy feeling about the future of their pensions—while also making taxpayers nervous.

The tax-exempt organizations and foundations that power the environmentalist movement keep coming up with new commandments. One of its newer rules to live by: if you have a workplace pension, make sure the pension isn’t invested in anything to do with “fossil fuels”—that is, sources of energy such as coal, oil and gas. Not only are such investments immoral, the divestment campaigners say, but those holdings also are poised to become worthless, as the world switches over to “green” sources of energy like solar and wind.

Across the U.S., Big Green is fighting to push public sector pension plans to “divest” themselves of shares in companies such as Exxon Mobil, and move the funds freed up into “renewable” energy investments.

According to findings published earlier this year by the Pew Trusts’ Public Sector Retirement Systems researchers, “US state and local public retirement systems held $3.8 trillion in assets in 2016, the most recent year for which comprehensive data are available…[About] 19 million current and former state and local employees” are counting on these systems for income while in retirement.

Many of these public retirement systems are carefully managed and, even after the financial cataclysm of 2008, in relatively good shape—such as in South Dakota, Tennessee, and Wisconsin. Some are in very poor shape. The Illinois state pensions face more than $130 billion in unfunded liabilities, for example. Kentucky’s public pensions have, by one measure, just 12.9 percent of the financial assets they need to cover known future benefits payable to the state’s retired public-sector employees.

The very real prospect of a taxpayer-funded bailout of these troubled pensions looms larger as their financial woes grow. Critics of the green divestment campaign argue that the last thing ailing pensions need is for their investments to become politicized—when what they need is to concentrate on maximizing investment returns to restore their financial health. The opponents include the Institute for Pension Fund Integrity, a small but vocal think-tank promoting higher standards in public sector pension governance, and the website DivestmentFacts.com, a project of the Independent Petroleum Producers of America.

This report will look at the public pension divestment movement and how it got off the ground—including its support from key philanthropic foundations. Using examples from Vermont, New York, and California, we’ll also look at the movement’s current playbook in action—before concluding with some prognostications of what tactics these crusaders may adopt in future.

Did It Really All Begin at Swarthmore?

In environmentalist mythology, the divestment movement’s Concord Bridge moment came in 2010, when students at Swarthmore College in Pennsylvania called on the school to divest from coal.

A mighty grassroots movement grew from that single seed, the story goes, through a tax-exempt group called 350.org, reaching first across the U.S. and then around the world, representing a spontaneous, bottom-up demand that universities and other institutions sell off any fossil-fuel-related holdings in their endowments.

The [2010] fossil fuel divestment campaign, picked up and expanded by 350.org and others, has become one of the best-known organized responses to climate change.

350.org (the name denotes a goal of reducing carbon dioxide in the atmosphere to 350 parts per million, or PPM) is a U.S.-based non-profit that started in 2008. It calls itself “a planet-wide collaboration of organizers, community groups and regular people,” all focused on harnessing “people power to dismantle the influence and infrastructure of the fossil fuel industry.” Its main organizing tools are social media posts, shareable videos, etc., all tailor-made for contemporary audiences that first go to the Internet as a source of information, especially about contentious political issues.

That’s one version. Another version emerges, however, if one reviews an assortment of relevant filings with the IRS. The grass-roots, bottom-up part of the story is a little less convincing after adding up the cumulative donations to 350.org from the Rockefeller Family Fund, for example—hardly a bastion of populist outrage. In 2012 alone, 350.org, a 501(c)3 and its Action Fund affiliate, a 501(c)4, received nearly $300,000 of Rockefeller money. Another $225,000 followed in 2013, and $250,000 in 2015.

As recounted in an earlier CRC piece looking at 350.org, the tight funding relationship between Rockefeller funding and 350.org has inspired some critics to refer to Bill McKibben’s group as a “RINGO” or “Rockefeller Initiative NGO.” (For more details, see: Obama’s Keystone Decision: How Green Groups Got Their Way, March 2012 Green Watch, as posted to CRC’s website.)

This high-level patronage suggests an alternative theory for the emergence of the divestment crusaders—that they are really one more example, as demonstrated time and again in CRC’s publications, of the skillfully-guided top-down evolution of the environmental movement—including through timely grants of support from its paymasters among the large tax-exempt foundations.

You could call it the “Big Green-Old Money” alliance, united around a shared belief that, in the words of George Perkins Marsh, a 19th-century American proto-environmentalist, that “humans themselves” are “the natural menace to nature.” (For more on Marsh, see: The Triumph of Environmental Alarmism: Science ‘Czar’ John Holdren and the Woods Hole Research Center, October 2009 Organization Trends, via CRC’s website.)

The divestment activists are looking with renewed gusto at U.S. public retirement systems. In April of this year, for example, the Labor Network for Sustainability published an updated version of its divestment how-to guide for union members, entitled “Should Your Union’s Pension Fund Divest from Fossil Fuels?” The Network works to unite labor and environmentalists around the Green New Deal, among other causes.

The guide makes a number of arguments falling on the affirmative side of the question. Fossil fuels are going to be “phased out eventually,” potentially by government fiat, so anyone who holds on to shares in oil companies, for example, will eventually lose money. The Network’s guide also implies that the funds freed up by divestment can be shifted to “climate-protecting development” projects that will “create many more jobs than the present fossil fuel-based economy.” Like most utopian visions, the document is heavy on rhetoric and light on detail.

To help union members convince their pension managers to divest, the guide includes pages of suggested pressure tactics, including how to push back on anti-divestment arguments. Interestingly, the guide favorably quotes Arabella Advisors, which CRC profiled earlier this year for its “fiscal sponsor” activities on behalf of a variety of radical causes. (See Hayden Ludwig’s extensive series of articles on Arabella, as posted to www.capitalresarch.org).

Arabella has for several years produced an annual update on the world-wide progress of the fossil fuel divestment movement. The 2018 iteration of the Arabella divestment report makes passing note of what it calls the “front groups” and “misinformation” being spread by divestment’s opponents—which it tries to dismiss as entirely consisting of oil companies or their lackies. The report also included acknowledgement of help from such stalwarts of the divestment cause as the Sunrise Project, Greenpeace, Rockefellers Brothers Fund, Wallace Global Foundation, and 350.org.

In the next installment of The Great Green Pension Hold-Up, learn how activists campaigned for “green” pensions in Vermont and New York.