The Carnegie Endowment Could Use Some Sunlight 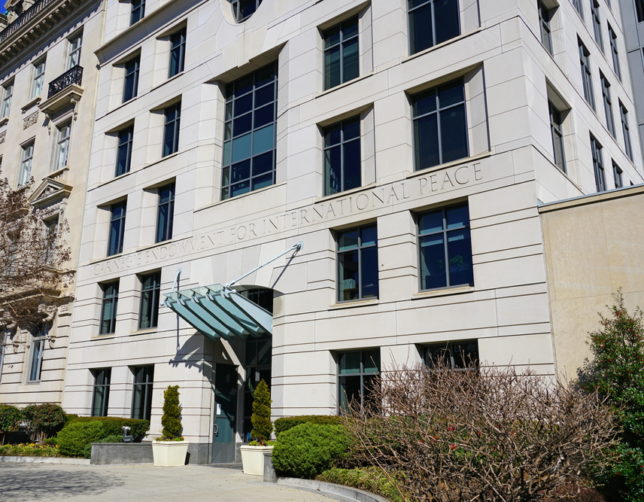 In a fascinating 2014 article published in The New Republic, writer John Judis lays out the argument that foreign nations might be “corrupting our Democracy” by funding U.S.-based think tanks to “to embrace their views of what is in America’s interest” and “lobby for these views with politicians and high officials.”

Citing a New York Times report that draws a distinction between an older think-tank model – arising from the Progressive Era and “free from any political or pecuniary interest” – and a newer, more influenceable model, Judis highlights the Carnegie Endowment for International Peace as a particularly admirable example free of the “taint of influence peddling”:

The New York Times report focuses on think tanks that retain some vestige of the older commitment to objectivity. It could probably have come up with more chilling examples of foreign influence-peddling if it had investigated those think tanks that have function as surrogate business lobbies. It may have looked at Brookings precisely because it is among the last, best hopes for keeping the flame of Progressivism alive in Washington. And I also believe that there are think tanks that have largely avoided any taint of influence peddling. (I spent several years at the Carnegie Endowment and didn’t encounter anything untoward.)

That last sentence is key because the Carnegie Endowment has recently come under fire for doing exactly what Judis suggested back in 2014 was a potential Democracy killer. The Daily Caller, on August 14, reported that current head of the CIA William Burns led the Carnegie Endowment while it brought on legitimate members of the Chinese Communist Party.

During Burns’ tenure as president of the Carnegie Endowment for International Peace from February 2015 to November 2021, the think tank employed at least 20 policy experts whom the DCNF has identified as CCP members. These CCP members worked at both Carnegie’s Washington, D.C., headquarters and Carnegie-Tsinghua — the Beijing center Burns’ predecessor, Jessica Mathews, launched in 2010 in cooperation with Tsinghua University.

This prompted Republican lawmakers to ask the Pentagon to cease funding the endowment – which takes in millions from the U.S. government as well as from major foundations and other sources – until the Burns/CCP issue was investigated.

“I call on the Department of Defense to suspend all contracts and projects with CEIP until the circumstances surrounding the hiring of these individuals can be thoroughly investigated,” Rogers said.

The question of what effect these kinds of relationships have on American foreign – and even domestic – policy is one Capital Research Center has been studying in the education and nonprofit sectors. As Texas Republican Rep. Lance Gooden told the Daily Caller, the tax-exempt status of organizations employing state actors from a hostile foreign government should be examined. Arguably, taxpayers might see this kind of employment as running counter to what their taxes are meant to cover.

The kind of funding, reputation, and legacy the Carnegie Endowment carries often serves as a kind of insulation as to what kinds of programs they’re running and policy ideas they’re pushing – and who benefits from both. It’s past time the American taxpayer, who foots a good portion of the bill, had a little more transparency about what Carnegie – a related organization of which had to apologize recently for its role in the early Eugenics movement – has been up to lately.

This article originally appeared in Townhall on September 12, 2022.