The Blueprint for Obamacare Originates in Left-wing “Dark Money” 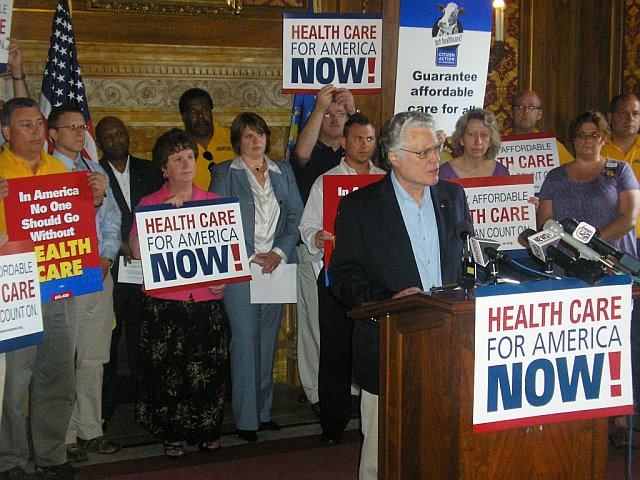 Advocate and mobilizer Richard Kirsch has been a part of the healthcare debate for decades.

Kirsch first demanded a nationalized healthcare plan in 1986 while he was director of Citizen Action of New York. He hatched his agenda to mobilize and sell his vision for subsidized healthcare after securing $47 million. The shadowy off-shore Atlantic Philanthropies donated $27 million, with another $6 million from other foundations, and $9 million from coalition partners such as AFL-CIO, USAction, and Campaign for America Now. The last $6 million came from individual donors.

This project came into fruition with the establishment of Health Care for America Now (HCAN), a 501(c)(4) advocacy organization established in 2007 to rewrite the laws of the U.S. healthcare system entirely.

As national campaign manager, Kirsch plotted with a coalition of left-wing groups including USAction (now merged with People’s Action), the AFL-CIO, Service Employees International Union, NAACP, the now-defunct ACORN, MoveOn, the Center for American Progress, the National Council of La Raza, Campaign for America’s Future, Center for Community Change, the Northwest Federation of Community Organizations, and others to advance the agenda of a government-led healthcare program.

Much of HCAN’s funding went toward multi-media causes and congressional outreach. One such advertising tactic was targeting insurance company CEOs by casting them as “over-paid villains.” For example, one ad highlighted Aetna CEO Ronald Williams’ salary of over $38 million as proof of all CEOs making such money. However, Politifact, a left-leaning source, pointed out that this one CEO’s pay was specifically “cherry-picked” to mislead the public that all healthcare CEO salaries are ridiculously high.

So how did Kirsch build HCAN’s successful campaign? Apart from its large network and deep pockets, HCAN was unafraid to take the “community organizing” approach. HCAN conducted over 873,000 phone calls, sent over 600,000 faxes, made congressional visits, and held town hall meetings and demonstrations, which cost the organization $47.2 million of its $60 million budget. The campaign was also strategically timed close to the 2008 election. HCAN pushed its agenda with a “Which side are you on?” strategy to distinguish the upcoming 2008 candidates on their policy priorities. Once Democrats secured the White House and Congress, HCAN set its left-wing coalition into action and pushed a cumbersome piece of healthcare legislation within the first two years of the Obama administration.

After Obamacare’s passage in 2010, Kirsch resigned as national campaign manager of HCAN, but remained as an advisor. He collected his reward as a senior fellow at the Roosevelt Institute when he received a $150,000 grant from Atlantic Philanthropies to write his memoir of the campaign to pass Obamacare. HCAN’s board chose Ethan Rome to finish the organization’s work to stabilize the new law at the state and federal levels.

Today, Kirsch is the director of a communications consulting project entitled Our Story Hub. Our Story Hub works as a front-line asset for the left-wing funder Proteus Fund, a 501(c)(3) organization that works as a pass-through funding source for foundations to quietly create new left-wing advocacy projects.

Kirsch is far from done advocating for government-run healthcare. Our Story Hub continues to push the national healthcare system by claiming it works for all Americans. But in reality, they’re declaring war on a free market system since they fight all “for-profit” drug and insurance corporations, as well as hospitals, in the hope that a radical Left government will “rewrite the rules.”