“[T]he need is not so much for the Government to design new programs as it is for the Nation to generate new will.” 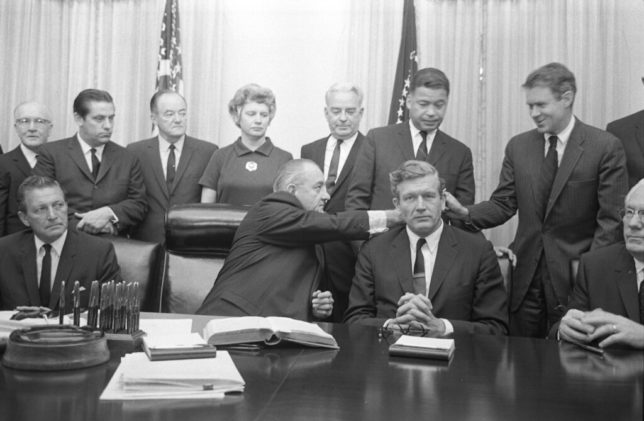 President Lyndon Johnson with some members of Kerner Commission in Cabinet Room of The White House in 1967 . Source: Wikimedia Commons.
by Michael E. Hartmann

After rioting had erupted in several American cities beginning in 1965, President Lyndon Johnson appointed the 11-member National Advisory Commission on Civil Disorders in July 1967. Chaired by Illinois Gov. Otto Kerner, the group became known as the Kerner Commission and issued its report in February 1968.

The report famously warned, “Our nation is moving toward two societies, one black, one white—separate and unequal.” It cited a lack of economic opportunity in those places where the riots occurred, and it severely criticized the media for not offering a wide-enough range of perspectives on the American experience.

American purchased more than two million copies of the 426-page report. Within two months following its release, rioting broke out in more than 100 cities after the assassination of civil-rights leader Martin Luther King, Jr.

In addition to at least two references to specific Ford Foundation grantmaking, in the contexts of education and employment programs, the Kerner Commission report at least twice contemplated roles for philanthropy.

One such role was suggested at the end of its chapter on “The Community Response.” “The involvement of the ghetto community in the planning and operation of development programs need not be confined to the public arena,” according to the report.

There is great potential in private community development corporations which can emerge from a combined public-private sponsorship and perform mixed functions for the community, including sponsorship of locally owned businesses.

A most promising approach is the neighborhood membership corporation, the first of which was established in Columbus, Ohio, in 1965—the East Central Citizens Organization (ECCO), under an OEO [Office of Economic Opportunity] grant. Functioning as a town meeting, its members include all of the residents of a defined ghetto neighborhood (8,150 people). Its activities encompass day-care centers, credit unions, legal and medical services, newspapers, restaurants, and business enterprises.

Both money and manpower will be needed from government, foundations, and private business to create and assist the corporations and other new community institutions. Technical and professional support will be required. The opportunity that they offer to develop stable community leadership structures and constructive involvement should not be allowed to fail for lack of such support.

Another role for foundations was floated in the report’s chapter on “The News Media and the Disorders.” Specifically, the

Commission proposes the establishment of an Institute of Urban Communications on a private, nonprofit basis. The Institute would have neither governmental ties nor governmental authority. Its board would consist in substantial part of professional journalists and, for the rest, of distinguished public figures. The staff would be made up of journalists and students of the profession. Funding would be sought initially from private foundations. Ultimately, it may be hoped, financial support would be forthcoming from within the profession.

Generally, by its own description, the Kerner Commission had one “basic conclusion: the need is not so much for the Government to design new programs as it is for the Nation to generate new will.” And it urged philanthropy to help meet that need. “Private enterprise, labor unions, churches, the foundations, the universities—all our urban institutions—must deepen their involvement in the life of the city and their commitment to its revival and welfare.”

This article first appeared in the Giving Review on July 7, 2020.