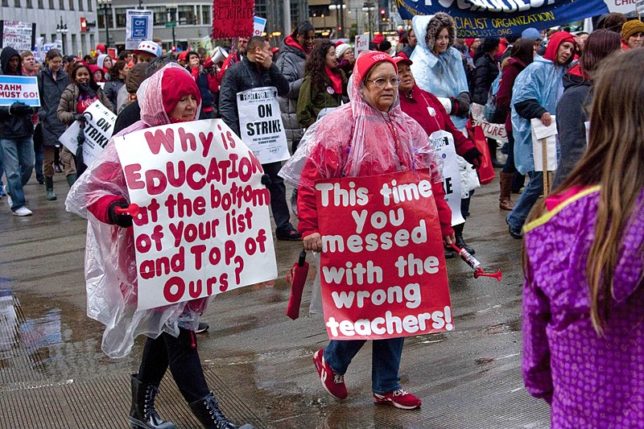 In June, the Supreme Court ruled in Janus v. AFSCME that state and local government employees could not be forced to pay union fees as a condition of employment. Since then, labor movement critics, union officials, and observers have wondered what effect the loss of compulsory “agency fees” might have on union revenues and political clout. But now, as national teachers unions start filing annual federal reports, hard numbers on the effect of the Janus decision are here. (Remember—local and state teachers unions, which represent no private-sector or federal-employee members, are exempt from filing under the Landrum-Griffin Act),

They aren’t as pretty as labor movement critics hoped for, yet. The National Education Association reported a decline in total members and fee-payers of 72,325 from the end of August 2017 through the end of August 2018 (out of a total base of just over 3 million)—a decline of just over 2 percent, all from former agency fee payers dropping out (meanwhile, membership actually rose). The NEA’s dues-and-fees revenue actually increased by $3 million, though the Janus ruling only applied to the final two months of the fiscal year.

But before union officials gloat about riding out what their supporters once called a potential source of “extinction,” remember that these are only the earliest evidence for impacts on union revenue streams. First, the NEA was already forbidden by right-to-work laws from collecting forced fees in 27 states before the Janus ruling—in those states, Janus would likely have a null-to-negligible effect. Sure enough, there is evidence that in the 23 forced-unionism states, the effect of Janus on the dues-payer base is more substantial: The Empire Center found that New York State United Teachers (NYSUT), the New York state teachers’ union federation, lost 6 percent of its fee-payers. The Freedom Foundation’s analysis indicated that an AFSCME affiliate in Washington State might have lost up to 20 percent of its payers.

It is also important to note that union imposed rules preventing government workers from leaving the union in a timely manner, likely reduced the fee-payer exit numbers from the first-two-months post-Janus. Mike Antonucci of The74Million.org compiled the “resignation windows” of a number of Maryland teachers’ unions; most of whom only permitted quitting the union in early September, which was after the national NEA report. These “resignation windows” are being challenged in the courts, and if the Janus ruling is any indication, a U.S. Supreme Court decision would likely strike them down. Justice Alito wrote, “Neither an agency fee nor any other payment to the union may be deducted from a nonmember’s wages, nor may any other attempt be made to collect such a payment, unless the employee affirmatively consents to pay.” (Emphasis added.)

The full effects of Janus cannot be known for at least a couple of years. And whether the impact is a severe blow to Big Labor’s finances or not, it is important to remember the core of the case: No longer can government workers be forced to fund union representation they oppose as a condition of their employment. No matter how many or how few workers choose to exercise those rights, that is a win for freedom.