Highest-income individuals use deduction the most and get biggest benefit from it, according to Joint Committee on Taxation. 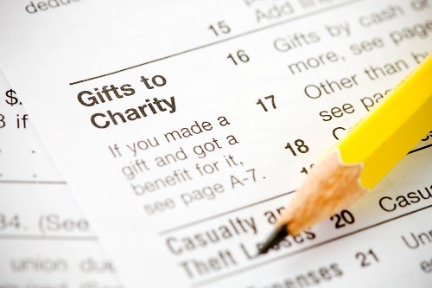 Our federal government tabulates how much it costs to incentivize us to behave in certain ways through the tax code. Every year, it adds up its estimated revenue losses from special exclusions, exemptions, and deductions from taxable gross income, as well as special credits, preferential tax rates, or tax-liability deferrals. It considers these “tax expenditures.”

Tax expenditures on the deduction for contributions to charity—so many of which are being made now, of course, before the calendar year ends—will total an estimated $56.1 billion in the government’s fiscal-year 2020, according to a November report from Congress’ Joint Committee on Taxation (JCT). Of this amount, $52.4 billion is from deductions claimed by individuals and $3.7 billion from deductions by corporations.

The Treasury Department prepares tax-expenditure estimates, too, which are usually released in February.

Congress’ JCT also estimates the distribution by income class of some tax-expenditure items, including the charitable deduction. The highest-income individuals use and benefit from the deduction the most, as shown in the charts below using data from its November report. 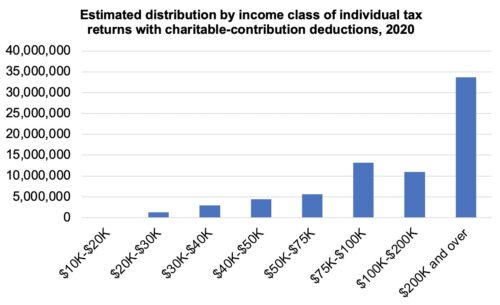 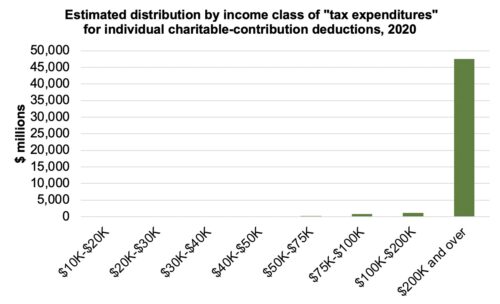 Some in Congress have proposed various ways in which to make it easier for all taxpayers to take advantage of the charitable deduction.

This article first appeared in the Giving Review on December 21, 2020.