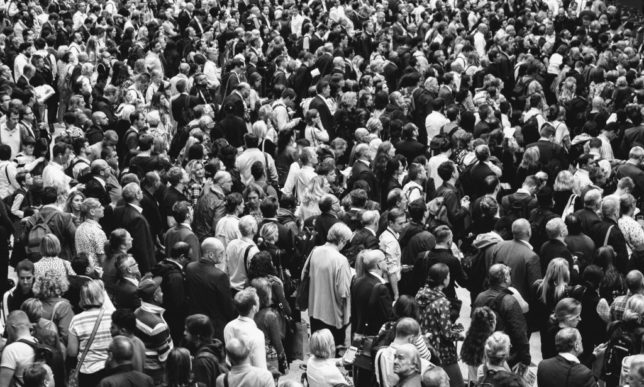 This article originally appeared in Philanthropy Daily on January 10, 2019.

Things are apparently so bad in the war between left and right that the largest independent bookstore in Washington promises next year to have a book club which will have liberal and conservative readers, and trained mediators who will keep the readers from throwing things at each other.

This polarization affects philanthropy and civil society because it should be our goal as donors to define civil society as a place where, well, people are civil and they recognize that whatever our politics, we all live in one country and the goal of politics should be compromise between factions and not a world where one side dominates and the other side can’t do anything about it.

The 2018 American Institutional Confidence poll from Georgetown University’s Baker Center, conducted by a research team led by political scientists Jonathan M. Ladd of Georgetown and New York University political scientists Joshua A. Tucker and Sean Kates, does warn that “partisanship—far more than age, race, education, social media usage, or other characteristics—explains Americans’ views of our democracy” and “many national institutions are suffused with hyperpartisanship.”

But the poll, funded by the Knight Foundation, also shows that there remain some aspects of American life where political partisanship does not yet dominate.

The center commissioned YouGov to conduct a survey in June-July 2018. The pollsters found that 72 percent of Republicans had confidence in our democracy but only 44 percent of Democrats did, perhaps because Republicans controlled the presidency and both branches of Congress at the time. There weren’t significant differences in overall confidence in democracy based on age or gender, but you were more likely to agree with the statement, “Democracy serves the people” the older you were, with 72 percent of those over age 64 and 52 percent of those aged 18-29 agreeing with the statement. A different trend applied with the phrase, “Democracy serves the elite,” with 26 percent of those over age 64 agreeing with this sentiment, while 48 of those between ages 18-29 agreed with it.

People who were in one party didn’t have a high opinion of those in the other party. Sixty-five percent of Democrats said that the Republicans were a somewhat or very serious threat to the U.S., while 62 percent of the Republicans felt that way about Democrats.

The question that concerns nonprofits is the one where people were asked how much confidence they have in various institutions, on a 1-4 point scale. Here are some areas where Republicans and Democrats differ greatly, along with their views on nonprofits, philanthropy, and religion. 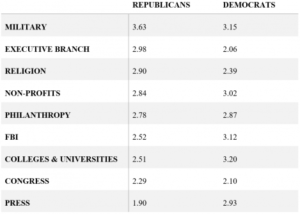 Some of these differences are predictable. If President Trump tweets every day about “fake news,” Trump’s supporters will give the media low scores and people who don’t like the president will say they’re confident in the press. I would also suspect that, were this survey taken under any other administration besides this one, the degree of confidence Republicans and Democrats had in the FBI would be roughly equal.

With nonprofits and philanthropy, however, the confidence Republicans and Democrats have is about the same. Why would this be the case?

I think the answer is to contrast nonprofits, philanthropy, and universities. Turn on the news, and if you see a piece about a college that isn’t about sports, it’s likely to be a piece about students, nearly always on the left, protesting a speaker or smashing a statue. These actions are nearly always done to inflame passions, and succeed in doing so. The result is that colleges, particularly on cable news, are seen as lawless places held hostage by the left.

I’ve never seen a similar piece about a foundation or a nonprofit. I’ve never heard of anyone protesting a foundation office. Nonprofits don’t get covered as closely as they should, but when they do get coverage, it’s usually a good news piece—homeless people getting a holiday dinner, for example.

People in the Baker Center poll were given space to vent, so conservatives say that colleges are “indoctrinating young people” and liberals explain that the president is a knave. No one is quoted as saying anything about philanthropy or nonprofits.

So if I were the head of a foundation or a nonprofit, the news I get from the Baker Center poll is that no one is mad at them. In our extremely polarized age, this is a very good piece of news.