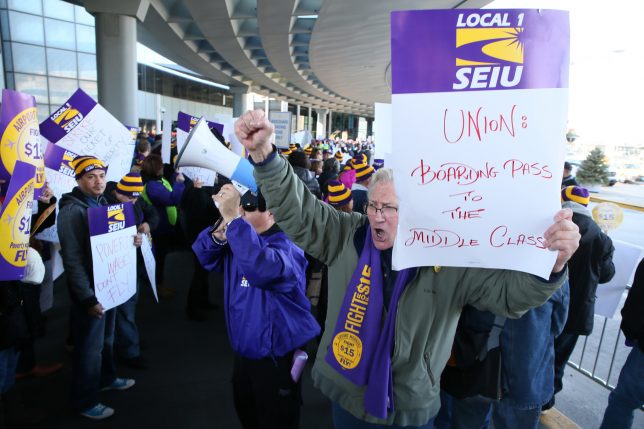 Image via the Chicago Tribune, goo.gl/H3gkn6
by Jacob Grandstaff

The ongoing war between the Freedom Foundation, a free market think tank, and entrenched labor unions in Washington state is a snapshot of the greater war for workers First Amendment rights.

For nearly three years, the Freedom Foundation has suffered a withering assault by the Service Employees International Union (SEIU) and other Washington unions over the think tank’s campaign to inform workers of their legal right not to join or pay dues to a union. Exercising that right, affirmed in 2014 by the state Supreme Court, thousands of workers have opted out of paying dues – costing unions an estimated $10 million in lost revenue.

In Harris v. Quinn, the state Supreme Court found that “the First Amendment prohibits the collection of an agency fee [from] home health care providers who do not wish to join or support a union.” In effect, mandatory dues collection by unions was found to be unconstitutional in Washington. Fortunately for the SEIU, few health care workers were given the memo. New evidence suggests the state’s Department of Social and Health Services (DSHS), the agency responsible for regulating home health care workers, actively colludes with the SEIU to mislead workers and keep them from leaving the union:

The purpose of such meetings is to allow union organizers an opportunity to pressure IPs to sign union membership cards.

In November 2014, the Freedom Foundation began its education campaign to inform as many as 50,000 hoodwinked workers of their rights. Using a Public Records Act request, the group was able to obtain contact information for thousands of workers – a move that was quickly contested by the SEIU. The union, desperate to preserve millions in dues, sued the think tank. But in April 2016, an appellate court ruled against the union.

When litigation failed, the SEIU lobbied the legislature to amend the Public Records Act in order to prevent groups from obtaining information about certain workers. Their efforts fell short. Thanks to the Freedom Foundation, some 20,000 home health care workers have opted to leave the SEIU in Washington and Oregon. Records obtained by the group’s vice president, Brian Minnich, reveal a drop of nearly 40 percent in dues-paying members.

In the larger context of workers freedoms, this is a major victory. Big Labor is heavily entrenched in Washington; a pro-union majority in the state legislature is propped up by millions of dollars in campaign donations from the SEIU, which overwhelmingly favors the state’s powerful Democratic Party. According to Freedom Foundation statistics, for instance, in the 2012 governor’s race unions gave Democrat Jay Inslee roughly $5.8 million, and his Republican opponent, Rob McKenna, a paltry $18.3 thousand. It was likely a deciding factor; Inslee won the race by a scant three percentage points.

As CRC Senior Fellow Michael E. Hartmann notes, Gov. Inslee later supported an SEIU-backed scheme to redefine residents receiving Medicaid payments for home health care services as “state employees.” This allowed the government to hold a mail-in election on unionization of the residents, few of whom were made aware of the Medicaid scam. Union members, after all, can pay union dues; and if a majority of unwitting residents voted to unionize, the SEIU could bypass the Harris v. Quinn ruling requiring consent for collecting dues.

David Dewhirst, a litigation counsel for the Freedom Foundation, estimates that SEIU collects as much as $3.5 million each year from illegal dues.

The campaign to disrupt the SEIU’s illegal dues machine has come at great cost to the Freedom Foundation, however. The plucky think tank has been harangued with a series of expensive lawsuits from the wealthy SEIU, which has spent roughly one million dollars in legal fees, according to policy analysts. Worse, the Washington state attorney general has piled on with his own lawsuit.

The series of lawsuits levied against the Freedom Foundation constitute “lawfare” – or warfare by legal means. In CRC’s short video, Chief Investigative Officer Dr. Steven J. Allen notes that lawfare “can destroy small businesses and individuals who can’t afford to defend themselves in our costly legal system.” Catch it here: