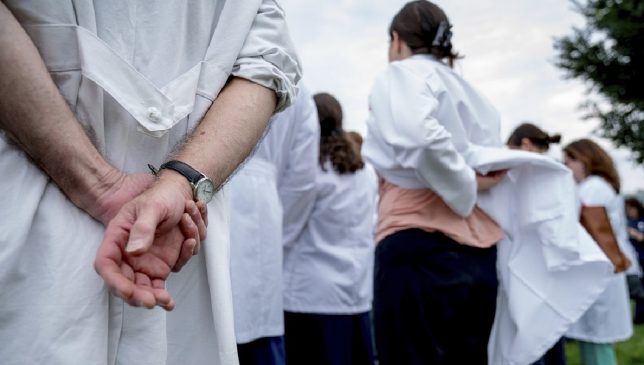 This op-ed was originally featured in the Washington Examiner on June 19, 2017.

Did you know that just telling union members about their rights under federal law can bring misery down on your head?

The SEIU has ginned up three separate lawsuits against the Freedom Foundation and also persuaded the state’s attorney general to sue the think tank. At issue: the Freedom Foundation’s effort to talk to more than 50,000 people dragooned into becoming SEIU members about their legal right to opt out.

These particular members ended up owing dues to the SEIU because of a dodgy scam the union pulled off with the help of friendly politicians to skim from the benefits paid out to indigent home care patients. The “members” in question didn’t ask to join the SEIU; they’re simply Washingtonians who receive state Medicaid payments to care for disabled loved ones — an ailing parent, say, or a handicapped child, who would otherwise require more expensive institutional care.

As has happened in several other Democrat-controlled states, the union got the governor to invent a shell corporation that supposedly “employs” persons receiving such Medicaid payments. Then, the state had a mail-in “election” on unionization of these home care workers, in which very few benefit-recipients even realized what was happening.

Finally, even though very few people receiving mail-in ballots ever voted, the state declared that the union had won the election and made every payment-recipient an SEIU member. It also began automatically deducting union dues from their Medicaid benefits. Many unlucky “members” knew nothing about what was going on until they saw their payments shrink.

The Freedom Foundation estimates the state SEIU skims something like $25 million a year through this scheme. The same outrage occurs in other states, and the injustice led the U.S. Supreme Court (in its 2014 decision Harris v. Quinn) to hold that individual home care providers in this situation cannot be forced to join or pay a union. “The First Amendment,” the court declared, “prohibits the collection of an agency fee from the plaintiffs in the case, home healthcare providers who do not wish to join or support a union.”

Home care workers may have won in court, but not many of them were aware of their rights. So, the Freedom Foundation launched an outreach program that employed dozens of paid canvassers going door to door to inform Medicaid providers of their right to opt out of joining and paying the SEIU.

The SEIU hasn’t taken kindly to this. Last September, the union and its affiliates filed three lawsuits against the Freedom Foundation. They even hired three separate law firms for the barrage of suits, inundating the foundation with intimidating subpoenas, depositions and discovery demands. The SEIU even convinced Washington State attorney general Bob Ferguson to file lawsuits against the Foundation.

In SEIU 775 v. Elbandagji, the union alleges the Freedom Foundation committed a “civil conspiracy” by inducing a former SEIU employee to give a partial list of SEIU-represented home healthcare workers to the Foundation.

The Freedom Foundation filed a counterclaim against the SEIU for “abuse of process” in the SEIU 775 v. Elbandagji case. A rare “special discovery master” has been appointed in the matter, which remains at a trial court in King County. As part of the discovery process, the Foundation requested documents showing how the SEIU handled information about its members, among other things.

The union refused, but on June 16, the discovery master — retired state Judge George A. Finkle — demanded that SEIU respond to the Foundation’s requests by June 30.

Finkle’s order is one small victory in the larger fight for workers’ freedoms across America. But it’s no small victory if you’re one of the Washingtonians who provides in-home health care to a disabled loved one, and a union is trying to skim from that loved one’s benefit payments without their permission or yours.

Finally, this decision just may yield some very interesting discoveries about how unions plot to deny their own members’ rights.

For Michael Hartmann’s full report on the Freedom Foundation’s fight for workers freedoms, see his piece in Labor Watch.

Michael E. Hartmann is director of the Center for Strategic Giving at the Capital Research Center in Washington, D.C. He is a former program officer and director of research at The Lynde and Harry Bradley Foundation in Milwaukee, which has supported the Freedom Foundation