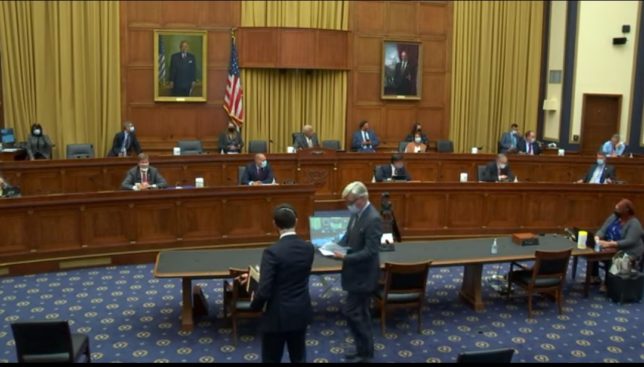 Last Tuesday afternoon, Sen. Sheldon Whitehouse (D-RI) appeared in a hearing of a subcommittee of the U.S. House Judiciary Committee and suggested the Federalist Society and other law-abiding right-of-center organizations were operating a “massive covert operation” aimed “against their own country.”

The Wall Street Journal editorial board later scolded Whitehouse for lobbing this baseless accusation of “treasonous” behavior. The Journal also dinged him for high tailing it out of the hearing when he had finished his prepared remarks and refusing to answer tough questions about the people he had just maligned. As Whitehouse was making for the exit, Rep. Jim Jordon (R-OH) also pointedly asked the committee chair why the senator was permitted to run off and not face the music. (See the hilarious video here.)

The comprehensive new profile of Whitehouse at InfluenceWatch shows that treating his ideological opponents like traitorous criminals isn’t new behavior.

In the summer of 2016, Whitehouse led his fellow Democratic senators in a crusade to persuade state and federal law enforcement to use the Racketeer Influenced Corrupt Organization (RICO) Act against free-market and right-of-center organizations such as the libertarian Competitive Enterprise Institute (CEI). RICO was originally created for and used effectively against mafia bosses and organized crime figures.

The InfluenceWatch profile explains that—unlike Whitehouse this week—CEI and the others didn’t run and hide:

The CEI president responded, saying Whitehouse had become the “new Sen. Joe McCarthy,” and that it “is unhealthy for democracy and abusive when members of Congress create an enemies list based on policy positions.” A joint letter sent to all of the Democratic Senators from 22 targeted think tanks stated: “Your threat is clear: There is a heavy and inconvenient cost to disagreeing with you. Calls for debate will be met with political retribution. That’s called tyranny. And, we reject it.”

“McCarthyism” may have been an unfair comparison . . . to the late senator. Unlike Whitehouse, when Sen. “Tailgunner Joe” McCarthy (R-WI) suggested his infamous and too-often baseless treason allegations back in the 1950s, he at least generally stuck around to argue the points. Maybe Whitehouse has evolved the brand into “Timid McCarthyism”?