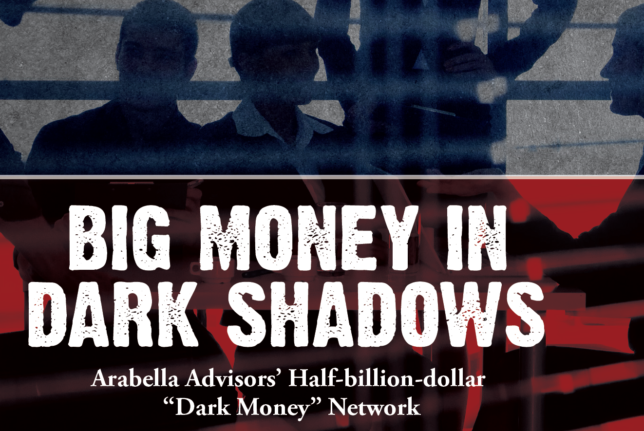 This article originally appeared on FoxNews.com on April 17, 2019.

An expansive network of “shadowy” dark money donors has grown to rival the influence of the conservative Koch Network — pumping millions into left-wing causes ranging from health care to climate change to abortion — all while flying well under the radar of public scrutiny, according to an explosive new report obtained by Fox News.

The report, by conservative watchdog Capital Research Center, describes a band of nonprofits operating under the banner of Washington-based philanthropy company Arabella Advisors. Those “pop up groups” are housed in four Arabella-controlled “sister” nonprofits, according to the report: the New Venture Fund, Sixteen Thirty Fund, Hopewell Fund and Windward Fund.

“Together, these groups form an interlocking network of ‘dark money’ pop-up groups and other fiscally sponsored projects, all afloat in a half-billion-dollar ocean of cash,” the report says. “The real puppeteer, though, is Arabella Advisors, which has managed to largely conceal its role in coordinating so much of the professional Left’s infrastructure under a mask of ‘philanthropy.’”

The report says the “hydra-like” network brought in $1.6 billion between 2013 and 2017 “to advance the political policies desired by wealthy left-wing interests,” as the network’s revenues grew by 392 percent. The four Arabella-controlled “sister” groups brought in $582 million in 2017 alone, according to the report. If the four groups were a single entity, it would make them the 22nd largest public charity in America, with higher revenues than the American Civil Liberties Union (ACLU), Planned Parenthood or the Clinton Foundation.

“The size and scope of the Arabella network of funds demonstrates far more ‘dark money’ exists on the left side of the political spectrum than has been previously admitted,” the report says.

Arabella’s website says the company was founded to “provide strategic guidance for effective philanthropy” and is “dedicated to helping clients make a difference on the issues that matter most to them, from climate to women and girls, education, good food, and more.” All told, the company represents clients with collective assets totaling more than $100 billion.

But the report alleges the group blurs the line between philanthropy and political advocacy on issues such as ObamaCare, gun control, abortion and opposition to the confirmation of now-Supreme Court Justice Brett Kavanaugh. And it says that due to the financial arrangements and lack of donor disclosure, “it is impossible to know which organization subsidizes the various campaigns and political movements spawned by Arabella’s funds.”

The company was founded by Eric Kessler, who has worked both in the Clinton administration, where he managed conservation issues, and as a member of the Clinton Global Initiative. He also founded the New Venture Fund and is on the board of the Sixteen Thirty Fund.

Arabella did not respond to a request for comment from Fox News. New Venture Fund President Lee Bodner told Fox News in a statement: “The New Venture Fund is proud of our work supporting charitable projects that improve peoples’ lives across a wide range of issues, funded by a diverse set of donors.”

The report claims the group runs a network of “astroturf” activities including as many as 340 “pop up” groups — which the report says are often little more than websites created to give the appearance of grassroots campaigns. It cites the organization’s activities pushing back against Republican efforts to repeal and replace ObamaCare as an example of its political activism.

“At a glance, these groups — such as Save My Care and Protect Our Care — appeared to be impassioned examples of citizen activists defending ObamaCare,” the report says. “In reality, neither ‘not-for-profit’ advocacy group appears to have paid staff, held board meetings, or even owned so much as a pen.”

Consequently, the report says, the groups can be used to run “short-term, high intensity media campaigns targeting the news cycle” such as during the Kavanaugh confirmation hearing. The report gave the example of activists, led by Demand Justice, waving glossy “Stop Kavanaugh” signs in protest of the conservative nominee’s confirmation.

Demand Justice, led by former Hillary Clinton press secretary Brian Fallon, is very active on judicial issues — and is more than just a website. But the report described the organization as part of the broader network, specifically “a front for the Sixteen Thirty Fund.”

The Sixteen Thirty Fund, according to a July 2018 Politico report, was described as “among the most prolific political advertisers of 2018” and aired 6,885 broadcast TV ads between January and July while spending $4.6 million on TV alone. Politico cited the group as an example of the left embracing the “dark money” tactics it long accused the right of weaponizing.

Politico identified 12 groups set up through the Sixteen Thirty Fund on health care alone. By serving as those groups’ “fiscal sponsor,” Sixteen Thirty Fund manages the money and aggregates their financial activities in its tax filings — making it hard to work out how much money was spent by the different groups and where.

The new report says liberal mega-donor George Soros’ Democracy Alliance, for instance, used the Sixteen Thirty Fund and New Venture Fund to host several projects “that didn’t disclose their original funders.” The Capital Research Center report says that Arabella’s nonprofit network allows it to mask the “pop up” groups’ nature, making them seem like the work of “grassroots” activists rather than what it calls “front groups for multi-million-dollar non-profits.”

Conservatives, however, are still spending more “dark money” than liberals in some areas. Vice, citing a study by the Brennan Center for Justice, reported last year that groups supporting Kavanaugh’s confirmation spent at least $7.3 million on TV ads, while those opposing him spent at least $2.9 million.

Democrats and left-wing activists — including Rep. Alexandria Ocasio-Cortez, D-N.Y. — have been increasingly vocal in their calls to clamp down and regulate “dark money” in U.S. political activities.

But dark money has had bipartisan beneficiaries.

A January report from Issue One, a bipartisan advocacy group, shows that liberal groups spent over half of the $150 million of dark money in the latest election. Conservative groups spent a third of the figure, while nonpartisan groups spent just 15 percent.

And Sen. Sheldon Whitehouse, D-R.I., recently said that dark money is a problem “on both sides of the aisle,” though he said it “occurs mostly on the Republican side.”

The Capital Research Center report warns: “Before left-of-center activists and politicians demand laws to increase transparency in the funding of campaigns and public policy advocacy, they may first wish to consider voluntarily disclosing their own funding sources.”