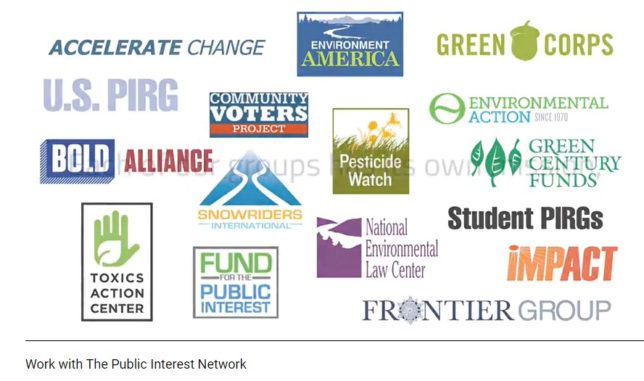 The Fund has been described as “the largest canvass operation in the United States,” and for good reason: it controls the droves of “clipboard kids” canvassing for other groups in the Network and the money they generate.

It operates according to the so-called “Aspen Model,” a series of nine principles said to have been created by Phelps during the first annual PIN gathering in 1985 in Aspen, Colorado. The Aspen Model “is treated a bit like gospel handed down from Doug Phelps,” according to an anonymous blogger on the website Public Interest Primer. For the individual canvasser, the Model is based around measurable benchmarks: registering new voters, raising funds, or getting signatures on petitions. Fall short and you’re probably out of a job. PIN is tight with money, always looking to maximize return on every dollar it spends. One of PIN’s mantras is “Always Be Recruiting”—almost certainly because new organizers are paid salaries as low as $25,000 per year ($12 per hour in a 40-hour work week) to work 60-plus hours each week.

Not surprisingly, working for the Fund is anything but glamorous. In her 2006 book Activism, Inc.: How the Outsourcing of Grassroots Campaigns Is Strangling Progressive Politics in America, sociologist and former canvasser Dana Fisher examined what she called “the People’s Project,” a pseudonym for a professional left-wing canvassing organization. While Fisher did not reveal the organization due to anonymity agreements, later sources revealed that the unnamed group was almost certainly the Fund for the Public Interest. The culture Fisher described at the Fund is designed to be “contagious”:

The canvass office is designed and managed to maintain a sense of community. Office walls are covered with quotes by famous progressive activists, including Saul Alinsky and Ralph Nader. . . . the People’s Project provides them as part of its office start-up package.

But “community” comes with a cost: harsh work conditions. Canvassers who fail to meet fundraising quotas could expect to be “asked to leave.” And because the turnover at the Fund is enormous, it’s “constantly recruiting, and just about everyone who comes in for an interview” gets a job. The cutthroat nature of the Aspen Model combined with low pay and the 60-plus hour work week results in understandably high attrition.

Even if a canvasser makes the cut, however, life at the Fund hardly improves. Full-time staff can expect to be relocated across the country—a practice called “geoflexibility”—in order to fill the needs of various regional offices. From the organization’s perspective, that’s a great thing . . .  if not in keeping with its “grassroots” facade. Although geoflexibility “may make sense to an organization that is constantly responding to campaign needs and changes in its staff,” Fisher writes, “from a political perspective the rationale is less convincing. How can the People’s Project run effective grassroots campaigns that are coordinated by rootless workaholics?”

Fisher laments the fake grassroots activism promoted by the Fund for the Public Interest, but she misses a key point: those “rootless workaholics” aren’t byproducts of the Fund—they’re at its core.

Unlike labor unions, which always have their own large pools of potential activists to draw on, most left-wing groups—such as Greenpeace, Sierra Club, and the Human Rights Campaign—rely on outsourcing from professional canvassing organizations like the Fund. That won’t change so long as these canvassers continue to bring in as much of 25 percent of a group’s annual revenues (in the case of Greenpeace) by signing up new supporters who make monthly donations.

It’s little wonder, then, that the Fund for the Public Interest has succeeded in making itself a permanent part of the Left’s political infrastructure. Through its legion of disposable canvassers, the Fund has become indispensable to numerous advocacy groups, and it’s built an empire in the process.

Inside the Public Interest Pyramid

At the top of that empire is Doug Phelps, and to preserve his power he’s built a complex network of machinery known as the PIN. For all intents and purposes, the Fund for the Public Interest is the Public Interest Network. The groups are often treated synonymously, which makes sense, considering that the Fund holds the purse strings.

PIN itself doesn’t appear to be a real nonprofit, at least as far as tax filings go. PIN doesn’t appear as a nonprofit or for-profit entity in IRS or state business filings. Instead, it serves as a catch-all term dating back to 2001-2002 for the network of aligned organizations that fall under the “Public Interest” brand, including the PIRGs and the Fund.

Confused yet? That’s kind of the point.

At first glance, almost nothing is clear about why these groups exist and what purpose they serve within PIN. But business filings with the Massachusetts Secretary of State’s office for NAOPI and NCPI shed some light on how they control PIN from above, acting in tandem to form a kind of “brain” for the Network. Here’s how it works.

National Association of Organizations in the Public Interest (NAOPI)

A complete change in NAOPI’s board membership from 2013-2014 hints at a possible power struggle at the top of PIN’s leadership structure, in which Phelps emerged the clear victor. In 2013, the NAOPI board consisted of Marjorie Alt, Jonathan Scarlett, Hyam Kramer, and Greg Herr, each of whom served on the board since at least 2002—but all were replaced by Phelps, Casler, and Fitzgerald the following year. (Herr currently retains a lower-ranking position within PIN; Scarlett is the president of Grassroots Campaigns Inc., while Kramer is CFO of Telefund—two of PIN’s for-profit canvassing firms we’ll tackle below.)

But if NAOPI doesn’t exist to move money around or to hire out canvassers, what use is it to Phelps?

An IRS document granting federal tax-exempt status written in 2006 and posted online anonymously in 2012 may provide the answer. The document was signed by the IRS’s newly appointed Exempt Organizations Director, Lois Lerner, and was addressed to Environment America, a 501(c)(4) advocacy organization spun off from US-PIRG in 2006-2007 to focus on environmental issues. Alongside the tax exemption, however, the document (available here) also included Environment America’s bylaws.

The California Public Interest Research Group (CALPIRG) shares a nearly identical arrangement. Included with its 2003 Form 990 filing with the IRS were amendments to CALPIRG’s bylaws:

Perhaps unsurprisingly, Doug Phelps is chairman of the CALPIRG board. In fact, as many as 34 other 501(c)(4) members of PIN list NAOPI as a “directing controlling entity” on their Form 990 filings. The 2006 tax-exemption application for Environment America’s Maryland affiliate confirms this, noting that “[m]ore than 40 groups belong to NAOPI.” The most notable NAOPI subordinate, though, is the Network’s clearinghouse arm, the Fund for the Public Interest. As noted above, the Fund acts like the Public Interest Network’s control center, coordinating its canvassing operations. It also controls the bulk of money in PIN, with 2015 revenues of $24 million and assets of nearly $28 million—money it then dispenses as needed to help other PIN members (such as Connecticut’s PIRG) advance their agendas.

Where there’s money there’s often power, so it isn’t surprising that the Fund’s board of directors is composed of individuals who form both the top tier of PIN’s leadership and Doug Phelps’s closest lieutenants: PIN senior vice president Susan Rakov, US-PIRG Education Fund president Janet Domenitz, former NAOPI president Marjorie Alt, Environment America president Ed Johnson, and Faye Park, president of US-PIRG and the Fund. At the top of the list, of course, is Doug Phelps himself, who bears the highly unusual title of “Top Management Official.”

Like NAOPI, NCPI isn’t registered as a tax-exempt organization with the IRS, although it files annually with the Massachusetts Secretary of State’s office. But unlike NAOPI, which was created nine years before NCPI by PIRG veterans who have since moved on, NCPI appears to have been organized from the start by Phelps’s top lieutenants. The group’s articles of incorporation reveal a board of familiar faces: Wendy Wendlandt, Janet Domenitz, and Marjorie Alt. (As of 2017, the NCPI board consists of Wendlandt, Domenitz, Susan Rakov, and US-PIRG senior director Ed Mierzwinski.)

While NAOPI and NCPI appear to be sister organizations at the top of the PIN pyramid, they don’t share equal power within the Network. As many as 45 other 501(c)(3) nonprofits list NCPI as a “direct controlling entity” in their Form 990 tax filings with the IRS. These groups are generally far smaller in asset size than their 501(c)(4) lobbying counterparts, however, and include the “research” and “education fund” arms of US-PIRG, Environment America, and their respective state affiliates.

NCPI also controls the Center for Public Interest Research, the 501(c)(3) counterpart to the significantly larger Fund for the Public Interest. The relationship between NCPI and the Center mirrors that of NAOPI and the Fund, with NCPI president Wendy Wendlandt also serving as president of the Center (its board also consists of various PIN vice presidents). But where the Fund primarily controls canvassing operations, the Center pulls in donations from major left-wing grantmaking foundations, including George Soros’s Open Society Foundation, the Ford Foundation, the Tides Foundation, and the Rockefeller Family Fund.

These discoveries suggest that NAOPI and NCPI may be shell corporations created to consolidate Doug Phelps’s control over the Public Interest Network. Phelps is able to assert complete dominance over the Network by placing himself and his top officers at the top of the most important organizations in PIN—many of which he himself “conceived and organized,” according to his profile on Environment America’s website.