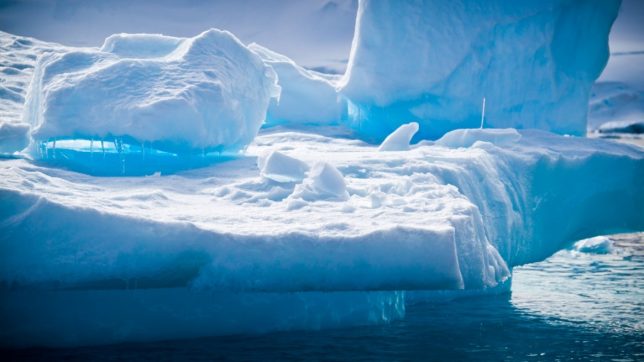 When Will That Next Ice Age Arrive? There are no data that can give us the answer to that question with any useful degree of precision. Could the new ice age begin this century? Yes. Could it begin several thousand years from now? Yes. But no one knows. Credit: ravas51. License: https://goo.gl/GZMxR6.
by Phil Berardelli

Summary: A veteran science journalist looks back 15-plus years of reporting on science and climate issues to offer key lessons—and warning—about climatology. Scientists should always maintain a healthy skepticism of “consensus” on ill-understood topics like climate change because the consequences of overreaction are too dangerous to risk.

When Will That Next Ice Age Arrive?

There are no data—none—that can give us the answer to that question with any useful degree of precision. Could the new ice age begin this century? Yes. Could it begin several thousand years from now? Yes. But no one knows. Repeat: No one knows.

Something else no one knows: When glaciation resumes, how rapidly does it occur? Is it a matter of a few years? A few centuries? A few millennia? Likewise, the interglacial warm periods.

Other, extremely large questions emerge from such unknowns. How could we feed 7 billion people if the planet’s main grain belts—in Canada, the U.S. northern Great Plains, and central Eurasia—are significantly reduced in area by glaciation? Where would the inhabitants of lands lost to glaciation—Canada, the northern U.S., much of northern Europe and Russia—relocate? If these vast areas effectively ceased to exist for 90 millennia, what would be the geopolitical implications? What would be the fates of Canada, Russia, and the countries of Scandinavia? Likewise, Alaska, Greenland, and probably Iceland. Should we begin calling them the lands waiting to die?

It would be overly dramatic to raise these questions if ice-age onsets occur gradually, meaning humanity would have many years to deal with the problems. But we don’t know what timeframe will be confronting us.

Then there is the possibility of a major change in sea level. Glaciation, by sponging up so much seawater, could lower ocean surfaces by as much as 100 meters—something the proxy data indicate has happened multiple times in the past. That much of a drop permitted the ancestors of Native Americans to walk across the Bering Strait from Siberia to Alaska during the last ice age. It’s also probably why humans in France some 30,000 years ago drew vivid images of rhinoceroses, lions, and hyenas on the walls of the Chauvet Cave—because a land bridge had formed across the Strait of Gibraltar, isolating the Mediterranean Sea from the Atlantic Ocean and allowing those beasts to migrate, at least temporarily, into Europe.

Could the new ice age begin this century? Yes. Could it begin several thousand years from now? Yes. But no one knows. Repeat: No one knows.

A sea-level drop during a new ice age would render useless almost every major port on Earth. How would the reconfiguration of the oceans affect the world’s ship traffic? Who would own the new beachfronts created by receding oceans? How would national boundaries be affected, particularly those already in dispute?

Few if any national leaders have even begun thinking of the implications of glacially conquered lands and expanding coastlines. On the contrary, up to now the climate-change discussion has focused exclusively on the possibility of rising sea levels and shrinking coastlines.

The Dearth of Meaningful Data

In short, all modern climate data severely lack perspective, and much of the data aren’t comprehensive. Scientific organizations domestic and foreign have placed temperature monitors all over the globe on the ground, in and under the oceans, and in the atmosphere in the form of balloons and in specialized aircraft. But there are large geographical gaps in the data, among other technical shortcomings. At best, the data can be used reliably only to track temperature changes at discreet locations.

The satellite data, as mentioned, do cover the globe. But the data go back only to the late 1970s. That is hardly enough to render any judgment about the long-term direction of global temperatures. The same with the extent and thickness of the Arctic and Antarctic ice caps, which satellites have been imaging for several decades. Other historical records, more-or-less reliable, exist back to the 18th century. Even with that added perspective, however, we can only speculate about the true direction of climate on a global scale.

Another significant problem already mentioned: Based on the data being collected, Earth’s temperatures are not behaving as the climate models have predicted. Since the turn of the century, average global temperature has risen only a small fraction of a degree (whether Fahrenheit or Celsius). That’s significantly less than predicted by all of the dozens of models used to project global trends. Moreover, none of the climate models has been able to reproduce accurately the temperatures recorded over the past two decades.

This is an extremely touchy and contentious issue, because the data leave a lot of room for interpretation. Despite all of the technological advances in data collection, we still lack enough information to make a conclusive statement about the current direction of Earth’s average temperature.

Then we have the mystery of the role of CO2 itself. We know via basic physics that the gas absorbs solar heat that is conducted or evaporated back from Earth into the atmosphere. We’re also fairly certain that levels of the gas are higher now than at any time in human history. And, the proxy data suggest that in prior geologic eras even higher CO2 concentrations existed during times of hotter atmospheric temperatures. What no one knows, however, is what caused the spikes in CO2 long before humans and industrialization existed. Furthermore, no one knows whether the spikes precipitated or resulted from the hotter periods. Hence, the connection between CO2 and global warming remains circumstantial, which could be why the supercomputer models are not precisely reproducing what is happening at present, temperature-wise.

Side issues concerning atmospheric gases such as chlorofluorocarbons, the outlawed substances that formerly enabled refrigerators and air conditioners to keep things cool, raise additional uncertainty. Banned because CFCs were eating a large hole in Earth’s ozone layer—thereby exposing all living things to more of the sun’s harmful ultraviolet rays—it turns out that curbing their emissions also removed a powerful driver of the greenhouse effect. Though accounting for a much smaller fraction of the atmosphere than CO2, CFCs can absorb up to 14,000 times more heat, pound for pound.

The researchers I interviewed on this topic estimated that ratifying the 1987 Montreal Protocol, which banned CFCs, has removed the equivalent of five times more greenhouse gases from the atmosphere than if the 1997 Kyoto Protocol, which ordered the reduction of CO2 emissions, had been fully ratified. (The U.S. Senate voted 98-0 in 1998 against ratification.)

CFCs are human-made substances; therefore, they could not have affected paleo (ancient) climates. But methane gas is naturally occurring, has existed on Earth perhaps as long as the planet itself, and traps 50 times more heat than equivalent amounts of CO2. What is its contribution to this mix, and how much of it is natural?

It all sounds like a far cry from settled science, doesn’t it? A climate scientist friend of mine has a better term; he calls it “a murky science.” Meanwhile, stay tuned, because a new fly looks like it’s about to perch in the ointment.

In the next installment of “Sacrificing Scientific Skepticism,” we look at the dearth of meaningful climate data – and why climate scientists have more questions than answers.