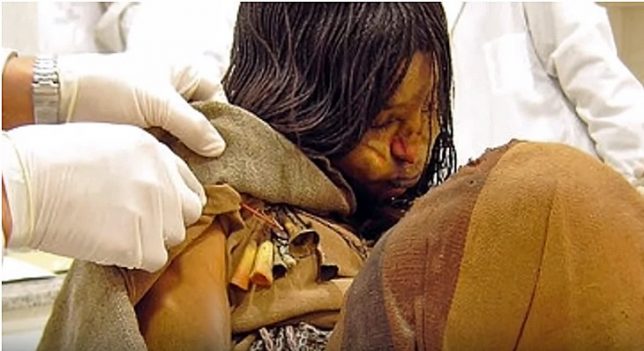 In the summer of 1996, high in the Andes Mountains of Peru, two scientists found the 500-year-old, frozen remains of a young girl. The extreme conditions that quickly froze her body provided a wealth of information for anthropologists and geneticists alike. Credit: V101 Science/YouTube screenshot. License: https://goo.gl/QB7Fre.
by Phil Berardelli

Summary: A veteran science journalist looks back 15-plus years of reporting on science and climate issues to offer key lessons—and warning—about climatology. When scientists sacrifice skepticism for consensus, they risk losing the doctrine of independent thinking and self-criticism that science is built upon.

In the summer of 1996, high in the Andes Mountains of Peru, two scientists found the 500-year-old, frozen remains of a young girl. I obtained a freelance assignment from a now-defunct weekly news magazine to write an article about the discovery. A journalist for two decades, I had never covered science, and the new assignment changed my life.

For the dead girl, the extreme conditions quickly froze her body. For the two scientists who risked their lives to find her, those conditions rewarded a decade-long search for a well-preserved remnant of an ancient culture and provided a wealth of information for anthropologists and geneticists alike. And for me, covering the story created an excitement and enthusiasm for science that remains undimmed to this day.

During the next 15 years, I filed and edited thousands of science articles for my various employers—whom I won’t name here because I’m expressing personal views. The cumulative work instilled in me a deep respect for those who dedicate themselves to unearthing, teasing out, or divining nature’s secrets with extraordinary patience and persistence and, as with the Incan mummy’s discoverers, occasional mortal risk.

The deep respect I feel also has generated sadness, a sense of frustration and outrage over what has occurred within a large segment of the climate science community, one currently dominated by a term that ought to generate repugnance in any true scientist: consensus.

As I noted above, this is a personal commentary. Though I do hold beliefs about the global climate situation, my purpose here isn’t to add my viewpoint to the debate. I’m writing to share that knowledge with you: what we currently know about climate change and, more important, what we still do not know. From that, I hope you will draw your own conclusions.

The Modelers and the Observationalists

The first dozen or so times I filed articles about climate science—in the late 1990s—there seemed to be little controversy. Human activity was pouring billions of tons of carbon dioxide into the atmosphere each year, and the case was building that the extra CO2 would intensify the greenhouse effect and warm the planet, perhaps to dangerous levels. At least, that’s what one segment of climate scientists was putting forth. They were the modelers, the people who, using supercomputers, were projecting the results of forcing human-emitted CO2 into our air.

Such a conclusion seemed to make sense intuitively. After all, atmospheric CO2 levels, which were closing in on 400 parts per million (recently surpassed, albeit slightly), represented nearly a 50-percent increase over pre-industrial levels—though CO2 remains a trace gas, accounting for only 4/100ths of one (1) percent of the air we breathe.

As I continued covering the topic, however, I encountered a dichotomy in what the scientists were telling me. On the one hand, the modelers exuded confidence in the results of their computations. Why shouldn’t they have? The Intergovernmental Panel on Climate Change, the U.N. body responsible for studying the prospects for global warming, has been using the models to make its predictions for nearly three decades.

The observationalists, on the other hand—the people charged with collecting temperature data—quietly but consistently began relating a different story: It might be happening, but we aren’t seeing it yet. In other words, the assured predictions of the modelers were not being reflected in the real-time data collected via sensors aboard weather balloons, ocean buoys, ground stations and, especially, orbiting satellites—the sole source of temperature data covering the entire planet, day by day.

The observationalists were not claiming that the modelers were wrong. Nor were they concluding that the global-warming narrative was false. The researchers in this field proved honest and conscientious—they are some of the finest scientists I know. They based their analyses on the data, and the data were not showing any significant warming. Moreover, the modelers were not—and still are not—able to differentiate temperature changes due to natural forces versus those attributable to human activities.

Climate is the Persistence of Weather Patterns Over Millennia

Let’s back up for a moment. Before I discuss further anything to do with climate or climate change, it’s important to understand the terms, beginning with “climate” itself. Simply put, climate is the persistence of weather and weather patterns over many years, emphasis on many. I’m talking about millennia—thousands of years—at the very least. To phrase it another way, a couple of decades of higher or lower temperatures do not a climate make.

Given such a timeframe, in the discipline of climate science only one type of data can be attributed to climate. It’s called proxy data, meaning it must substitute for stationing thermometers and atmospheric gas samplers around the globe across the ages. Examples include the calcium carbonate encrusting coral reefs as well as the shells of foraminifera, tiny creatures embedded in ocean-bottom sediments; ice cores extracted from Greenland and Antarctica; and tree rings. All can help climatologists estimate temperature, atmospheric composition, sea level, and other conditions going back thousands of years.

Take the ice cores. Based on those from Arctic and Antarctic drill sites, scientists believe our planet has been locked into a 100,000-year cycle of ice ages for at least half a million years, with the glaciation lasting for roughly 90,000 of those years interrupted by warm periods of only about 10,000 years. Other proxy data suggest the cycle has been going on for over 2 million years.

Sounds mildly interesting, maybe, until you realize a stunning fact: Since the end of the last ice age 11,000 years ago—an ice age that deposited sheets up to a mile thick as far south as Manhattan, lowered sea levels as much as 100 meters and, when it finally melted, left behind a vast recreational playground called the Great Lakes—all of human civilization has sprung up.

The last ice age 11,000 years ago deposited sheets up to a mile thick as far south as Manhattan.

Think of it. We’re locked in a planetary climate cycle that has lasted a couple of million years or more, 90 percent of which consists of ice ages. What’s the cause? Though the proxy data can help scientists track the glacial ebbs and flows, the data so far cannot help to pinpoint the specific forces driving these global-scale events. As far as anyone knows, it’s a combination of factors such as solar activity, variations in Earth’s orbit, and wobble in its axis of rotation—which affect how much solar radiation a given area of the surface receives—and changing patterns in ocean currents. How it all fits together, however, is entirely speculative. The “on-off switch,” as glaciologists call it, for ice ages remains elusive. “The more detail you look at, the more structure you see,” one of them told me.

The uncertainty includes the role of volcanic eruptions, particularly eruptions from the planet’s supervolcanoes, such as the 50-mile-wide caldera underlying Yellowstone National Park in the northwestern United States. You might have noticed the news articles lately about the Yellowstone volcano possibly growing active again. I saw another item pop up on the day I was typing these words. I wrote my own first article about the phenomenon 20 years ago, covering largely the same ominous developments and unanswered questions. I wrote another, for a different publication, ten years ago. In both cases, a decade apart, volcanologists told me virtually the same thing: The place is active, but there’s no irrefutable indication that an eruption is in prospect.

Imminent or not, a Yellowstone super-eruption would produce catastrophic results. The previous three that are known—the first about 2 million years ago, the second about 1.2 million years ago and the most recent within 600,000 years—spewed ash to depths of up to 65 feet across half of what is now the continental United States. But I repeat: So far, no volcanologist—particularly anyone who specializes in studying Yellowstone—has rung alarm bells, because no volcanologist knows the answer.

Relevant to this discussion, Yellowstone’s history raises an interesting question. When the caldera erupts, it tends to be on an unimaginable scale, coughing up as much as 2,500 cubic kilometers of material and spreading it across half a continent. For comparison, the massive 1980 eruption of Mount St. Helens in Washington State produced a relatively paltry 0.3 cubic kilometer. So, gigantic volcanic events occurred 2 million, 1.2 million and 600,000 years ago, all within the current ice-age cycle. Why didn’t the eruptions disrupt that cycle? The answer, scientists speculate, is that the effects of supervolcanic eruptions are too short-lived, on a geologic time scale, to disrupt the bigger factors currently regulating the planet’s long-term climate pattern. No one knows for sure, because there is no direct evidence linking the eruptions with either the onset or termination of glaciation.

Such a realization raises an even bigger question. Twenty ice ages, and possibly more, have been recurring on Earth for 2 million years, each one emerging roughly every 100,000 years. The warm intervals last about 10,000 years—though they can run considerably longer. The last ice age ended about 11,000 years ago; technically, we’re overdue for the next one.

In the next installment of “Sacrificing Scientific Skepticism,” we examine the lack of perspective in modern climatology – and the danger of treating scientific mysteries as certitudes.