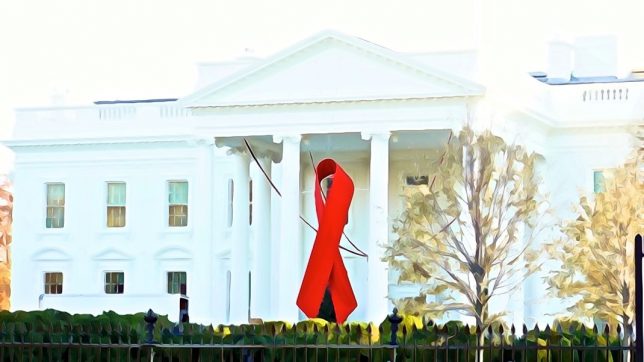 One small pocket of microbiologists did not accept the consensus. Risking their careers and reputations, they doggedly pursued a course they had repeatedly been told was a dead end. Through astounding and heroic efforts, they eventually discovered a retrovirus that indeed infected humans. We all know its name: HIV. Credit: Ted Eytan. License: https://goo.gl/bXFgLy.
by Phil Berardelli

Summary: A veteran science journalist looks back 15-plus years of reporting on science and climate issues to offer key lessons—and warning—about climatology. Thanks to a few brave scientists, the modern world has avoided many disastrous mistakes brought about in the name of “consensus.”

The Documented Danger of Consensus

Going back once more to the late 1990s, in the course of researching and writing an article about a dangerous organism called a retrovirus, I met a microbiologist who related an amazing story, partly about himself and the microbiology community but mostly about a group of extraordinarily brave scientists.

The microbiologist, whom I eventually profiled for his local metropolitan newspaper, had been accepted by a prestigious, big-city graduate school in the late 1970s. Soon after arriving on campus, he attended a faculty-student reception, at which he struck up a conversation with a man who would be one of his professors.

The conversation seemed cordial enough, until the professor asked the student what research specialty he wanted to pursue. He answered that he had studied retroviral infections in animals as an undergraduate, and now he wanted to investigate the possibility that the organisms also infected humans.

The young man would never forget the reaction. The professor physically pulled him aside and informed him there were no human retroviruses, that no microbiologist worth his salt believed they could infect humans, and that if the student persisted in searching for them in humans he would not only be wasting his time but also would be subjecting himself to perpetual ridicule by his colleagues. The professor even warned the student not to reveal his interest in human retroviruses to anyone else.

There were no human retroviruses, and no microbiologist worth his salt believed they could infect humans.

The encounter stunned the young man to the point that he dropped out of school. Meanwhile, nearly the entire microbiology community remained wedded to the consensus that retroviruses could not infect humans. At the time, the conclusion was considered rock solid, because no one had been able to prove their existence, and several research papers claiming to have found human retroviral infections eventually were shown to be faulty.

Fortunately for us all, one small pocket of microbiologists did not accept the consensus. Risking their careers and reputations, and despite several major setbacks—and even bouts of intense self-doubt—they doggedly pursued a course they had repeatedly been told was a dead end. Through astounding and heroic efforts, they eventually discovered a retrovirus that indeed infected humans.

We all know its name: HIV.

The details of that quest have long since been related in books and even a movie. The discoverers of HIV, led by Dr. Robert Gallo, shared a Nobel Prize. The subject of my profile eventually returned to school, earned his doctorate and for a time worked with one of Gallo’s team members. Today, he heads a prestigious medical research organization.

How many hundreds of millions of people alive today would have been killed by HIV infections if Robert Gallo’s team and a few others in the field had succumbed to the consensus about retroviruses—had not risked their professional lives? Would we, even now, know what causes AIDS?

I’ve never forgotten that lesson, and because of it I must ask:

Why should we accept any consensus about global warming?

Why should we treat scientists whose research does not conform to the consensus with contempt?

And why should we take any action that, well-intentioned or not, risks bringing on the 21st ice age in the latest hundred-thousand-year cycle?

My fondest wish is that we could get beyond the political rancor that currently infects the climate debate. That we could accept the lessons of the past—such as the public-health bullet we all dodged because a few scientists bravely defied consensus and outright opposition and pressed on with their retroviral research—and allow scientific inquiry to proceed independently, unhampered by preconceptions. And that we could dispassionately review whatever conclusions that inquiry presented.

Quoting Carl Sagan again, “This independence of science, its occasional unwillingness to accept conventional wisdom, makes it dangerous to doctrines less self-critical, or with pretensions to certitude.”

Let’s hope what guides us in the coming years will be infused with that kind of wisdom.