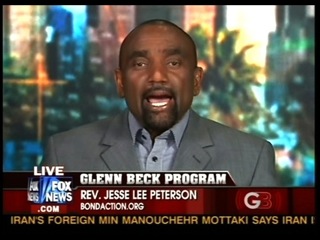 On July 3 G. Gordon Liddy had a fascinating discussion on the “G. Gordon Liddy Show” with Rev. Jesse Lee Peterson, founder of BOND (Brotherhood Organization of a New Destiny). They discussed how the left uses race as an issue to augment its power regardless of the harm that so doing causes to the black community. The podcast is available here.

Rev. Jesse Lee Peterson: When the House and the Senate apologized for slavery I was saddened by that because I know that white Americans who are living today had nothing to do with past history. All the slaves are dead, all the slaves’ owners are dead, and America has done more to repent or make up for the past history of this country than any other country in the world and when they apologized I knew then that it opened the door for reparations and I had thought once, Gordon, that we would never have reparations, that that would not come about, but now that we have the Messiah there, the prophet, the anointed one in the minds of many black people, Barack Obama, I believe now that reparations are going to happen and it’s just, it’s evil and it’s going to divide us like nothing else before in history but this apology has opened the door for that.
For example, Harvard professor, law professor Charles Ogletree helped put this resolution together, he worked with the Senate to put this apology together and he’s been fighting for restitution for a long time and he said that, OK an apology is nice but it’s not enough, it’s not going to satisfy black America until they give us money, and I’m sorry about that. I wish that white America would stand up to this racism that’s coming from black people but I don’t see that happening. I think it’s a sad day in America.

Rev. Jesse Lee Peterson: I’ve been saying to white Americans for years now that they need to start speaking up, they need to get over this fear of being called a racist, because they have allowed this to happen for 50 years and they have trained other young blacks that, you know, Jesse Jackson and others can get away with intimidating us and you can do the same thing and now we have a far-left liberal socialist black Democrat who believes in the redistribution of wealth, he wants to take it from the white man and give it to those who are not earning their way because they’re trying to destroy the white man and that’s what this is about and if white people don’t get over the fear of being called racist it’s over for America.
I don’t see the Republicans standing up to this guy. Because he’s a black liberal they’re afraid of racism and Obama has turned this country upside down and I believe in my heart that Obama will go down in history as the most hated and worst president that this country has ever experienced and all of these guys are connected together.