Randi Weingarten: A Study in Hypocrisy 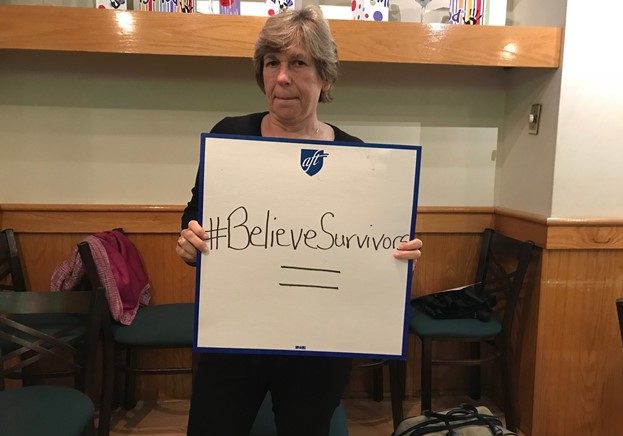 Over the past year and a half, Randi Weingarten, president of the American Federation of Teachers (AFT), has been a controversy magnet. Demanding flexibility for teachers and restrictions for students, Weingarten and teachers union leaders like her have repeatedly put political agendas and their own interests before those of students during the COVID-19 crisis, and angry parents around the country are starting to take notice.

Recently, Weingarten has again showcased her political agenda by publicly defending Alphonso David, an alleged participant in the cover-up of sexual harassment allegations against Andrew Cuomo.

In late August, the bombshell report by New York Attorney General Letitia James (D) confirmed that more than a dozen women had made credible accusations against Cuomo. Cuomo resigned in disgrace soon after, but he was far from the only person to lose their job over the report.

Robbie Kaplan and Tina Tchen, co-founders of Time’s Up Now, an organization formed specifically to help victims of sexual harassment, resigned after the investigation alleged they had helped write an op-ed meant to discredit Cuomo’s accusers. They had even ordered Time’s Up staff to stand down from supporting Cuomo’s first accuser, Lindsey Boylan.

By far the most involved, though, was Alphonso David, president of the LGBT activism group, the Human Rights Campaign. David, Cuomo’s former legal counsel and close friend, had allegedly handed over confidential personnel files on Lindsey Boylan so that they could be leaked to the press. He also helped write the aforementioned op-ed and participated in conversations about secretly recording a different woman who had also made accusations against Cuomo.

After an internal investigation, David was quickly fired. Many of his former friends on the Left cut ties with him, but not Randi Weingarten.

I know @AlphonsoDavid. He has alway [sic] fought for justice. He is also a wonderful human being. Why after an internal review which clears Alphonso would anyone ask for his resignation.

Yet the internal review did not clear him of wrongdoing—quite the opposite, in fact—and the Human Rights Campaign was quick to contradict the claim.

All too willing to just forgive and forget when it came to her political allies in 2021, Weingarten’s writing about Brett Kavanaugh in 2018 takes a noticeably different approach.

Weingarten was an outspoken opponent of the confirmation of Supreme Court Justice Brett Kavanaugh because of sexual assault allegations against him from 1982 that were widely considered questionable. Weingarten wrote passionately on the subject, excoriating President Donald Trump and Republican senators, who doubted the accusations, for “covering up abuse.” In the dramatic conclusion of her article, Weingarten wrote, “It’s time to stop covering up abuse. It’s time to #BelieveSurvivors.”

Apparently, Weingarten applies this standard differently based on whom the “cover-up” is for.

Conservatives who expressed suspicion of uncorroborated and unverifiable last-minute accusations from the 1980s are abuse-enablers and morally complicit. But Alphonso David, who was named as an active part of the cover-up for Cuomo multiple times by witnesses in an official investigation by the NY Attorney General, is “a wonderful human being” who deserves to keep his job.

This is yet another example showing that Weingarten cares more about political agendas than the truth. It is no surprise, then, that parents do not take her seriously when she wails “think of the children”  while demanding further school shutdowns, mask mandates, and vaccine requirements.