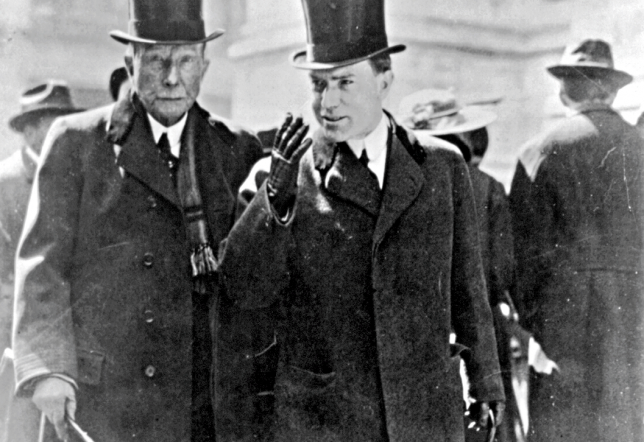 There has been much recent attention paid to private philanthropy’s influence on public policymaking. There has also been much lamentation about this influence—purportedly inordinate, and properly perceived to be growing.  We trust you’ve heard at least something of the giving by the conservative Koch brothers, Charles and David, and the liberal George Soros, for example.

Last year’s The Givers: Wealth, Power, and Philanthropy in the New Gilded Age, by Demos co-founder and Inside Philanthropy editor David Callahan, offers many other examples of both conservative and liberal individual givers’ attempts to alter or change various policies of interest to them. Callahan’s profiles are engaging and interesting. He believes attention should be brought to these givers’ projects and that their funding is not sufficiently transparent. At the end of the book and elsewhere, he urges much-stronger government regulation to enforce such transparency. Too much, actually.

A mid-January Wall Street Journal editorial covers yet another contemporary example—liberal foundations essentially running state energy policies without any disclosure of it. The editorial sheds light on the foundation-funded World Resources Institute’s (WRI’s) outright hiring of the State of Washington as a contractor last July.  WRI had $108 million in assets in 2015, according to tax records.

Specifically, “Under this remarkable arrangement, the state agreed to perform a ‘scope of work’ for the nonprofit that includes ‘activities and deliverables’ to advance a green agenda,” according to the Wall Street Journal piece. A spokeswoman for Washington State Gov. Jay Inslee defended the arrangement, saying two other positions in his office were previously funded by private grants and lauding “public/private partnerships” like this to “fill critical gaps.”

“The special-interest tail is officially wagging the democratic dog,” the Journal editorial continues, “given that the contract provides the job framework for Mr. Inslee’s senior policy adviser for climate and sustainability, Reed Schuler.”

Schuler’s official duties, it goes on, “include working to ‘identify policy ideas,’ ‘draft policy proposals and briefs for communication to Policy Director and Governor’s executive team,’ and ‘prepare letters, executive orders, and other directives for the Governor’s signature.’” Schuler helped write Inslee’s recently proposed carbon-tax plan, which would levy a $20-a-ton tax on carbon emissions and then go up from there.

This is not the traditional “public education” about policies, their effects, and reform proposals that philanthropically funded research and advocacy groups can and regularly do, or even legal representation to defend or provoke reform.

It is, in fact, a much more direct attempt to influence than those written about by staunch accountability proponent Callahan in his The Givers.

“Washingtonians deserve more details about which outside groups fund Mr. Inslee’s policy team,” the Journal opines. “Substitute the Koch brothers for the World Resources Institute, and the outrage would be predictable. This setup creates real concerns about accountability and interest-peddling.  Mr. Schuler knows who pays him, and it’s not Washington taxpayers.”

Yes, the Journal has a point. Callahan, one suspects, would probably agree with it.

Between 1906 and 1914, the Rockefeller-funded General Education Board (GEB) spent “almost $1 million in ‘supplements’ to the salaries of some six hundred special Agriculture Department farm demonstration agents,” according to Sealander. The supplement scheme, however, “was actually a ruse. Agriculture paid GEB-supported special agents one dollar per year.” (p. 48)

So that’s the equivalent of 600 Schulers.

True to Rockefeller’s and the era’s—as well as, presumably, Schuler’s current version of—Progressivism, the privately funded farm demonstration agents taught farmers about “scientific agriculture,” including how to practice what were called the “Ten Agricultural Commandments,” as reported by Sealander. The GEB called the pilot project “a ‘perfect illustration’ of public-private cooperation.” (p. 49) Inslee-like.

The arrangement ended in 1914, when the Smith-Lever Act appropriated $4 million in federal funds for it, to be matched by states. In 1917, the Smith-Hughes Act devoted even more federal largesse to Rockefeller-hatched ideas and pilot programs.

Then, “the halls of Congress rang with denunciation” of the Rockefeller funding, Sealander writes.

When Sen. William Kenyon of Iowa, an Agriculture Committee member, discovered the 1906 memorandum “that provided the framework for eight years of GEB payment of government employees,” he furiously “condemned the Rockefellers as the agents of a ‘silent empire,’ who wanted to establish an ‘invisible government—through gifts to education.”

And Kenyon “was not the only public official surprised to discover the details of the arrangement.” (p. 53)

According to Private Wealth & Public Life, Sen. Hoke Smith of Georgia, whose very name was on the acts expanding the programs into their federal-funding phases, said,

I never knew of this contract until within the last thirty days. As a member of the Senate, I thought every dollar of the fund came from the Federal Treasury …. I think our Treasury is strong enough to pay for anything that ought to be done for the general welfare of the people of this country. (pp. 53-54)

Furthermore, “Thomas Gore of Oklahoma demanded a ‘divorce of the Government and the General Education Board,’ because any money coming from the Board or any other Rockefeller philanthropy was unclean—‘red with human blood and dripping with human tears.’” (p. 52)

While it accepted the federal expansion of “scientific agriculture,” Congress simply barred government acceptance of any similar, and similarly secret, subsidy from Rockefeller in particular or philanthropy in general to help expand it.

As for America’s then-richest man himself, Sealander says, he “never seemed to understand why Senator Kenyon was so angry to discover that Rockefeller money had paid the salaries of government employees.” (p. 56)

One wonders whether the World Resources Institute, Gov. Inslee, or Schuler would understand Sen. Kenyon’s indignation about this kind of non-transparent influence on policy. Yes, the Journal editorial makes a good point. Kenyon, one suspects, would agree with it.