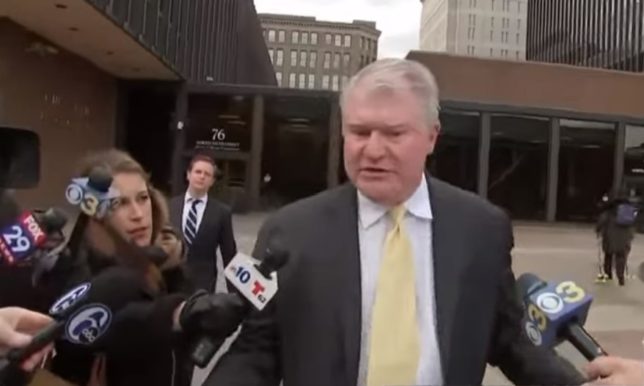 In November, a federal jury convicted John Dougherty, business manager of International Brotherhood of Electrical Workers (IBEW) Local 98 in Philadelphia, on a handful of conspiracy and fraud-related charges. Union boss busted for financial schemes. Nothing new or notable here, right?

Wrong. Dougherty wasn’t just a local union boss: He was the most powerful non-elected figure in Philadelphia—and perhaps the entire state of Pennsylvania, which handed Joe Biden his 269th electoral vote of the 270 he needed to win the 2020 presidential election.

This is illustrated by the position of his co-defendant turned co-convict: Philadelphia Councilmember Bobby Henon, a Democrat who represents the council’s sixth district in the north of the city. Prosecutors alleged that Henon’s second job, a $70,000 per-year post with Dougherty’s union, was actually a no-show job that Dougherty used to unduly influence Henon’s official acts. The jury convicted both men on multiple counts related to the scheme.

But Dougherty’s union-based favor-trading machine was bigger than one councilmember in one district in one city in one state. As Matthew Brouillette of the Commonwealth Partners Chamber of Entrepreneurs has written, “Local 98, under Johnny Doc’s direction, has doled out more than $41 million in political spending since 2010, spanning all branches of government, according to campaign finance reports.”

Among the beneficiaries was Johnny’s brother Kevin, elected to the Pennsylvania Supreme Court as a Democrat in 2015 with two other Democrats with a combined $1.5 million in IBEW Local 98 backing. Their election flipped partisan control of the court from Republican to Democratic. That flip had major consequences for national politics when liberal interest groups led by the League of Women Voters sued to overturn Pennsylvania’s congressional maps and the newly Democratic-controlled Pennsylvania Supreme Court agreed. As a direct result, Democrats gained three seats in Pennsylvania’s 2018 House elections that they continue to hold after the 2020 elections—those three seats are one-third of Nancy Pelosi’s nine-seat majority.

And what was the union boss/politico pair’s response to their convictions? Johnny Doc put out a statement breathtaking in its moral corruption: “what Councilman Henon and I were found guilty of is how business and politics are typically and properly conducted.” To Dougherty, keeping a public official on the payroll and then jawboning him to do Dougherty’s will on everything from union anti-business vendettas to Johnny Doc’s private grievances is how politics should work. Twelve of his peers thought otherwise.

“The Union That Rules New York”

But Dougherty’s and Henon’s scheme is just the worst sort of machine politics. Organized labor uses its muscle far beyond Philadelphia and often gets away with it by being less brazen in its Tammany Hall–style corruption. Consider the power of 1199SEIU, memorably called “The Union That Rules New York” by Manhattan Institute scholars Daniel DiSalvo and Stephen Eide in 2015.

The union’s leadership has been closely allied with the left wing of the New York City and New York State Democratic Parties since the era of Mayor David Dinkins, but 1199’s machine is as cynical as it is ideological. During the tenure of Governor George Pataki (R-NY) and a gerrymandering-greased Republican majority in the state senate, 1199SEIU in partnership with the state’s hospitals association leaned on the governor and the senate Republican leader to keep pumping taxpayer money into the state’s Medicaid system. It’s not like 1199SEIU was a true friend of Pataki and the Republicans either: Throughout the period union leadership pushed a left-wing social agenda. After Pataki retired and New York’s Democratic-leaning electorate dismissed the Senate Republicans to exit stage left, conservatives had gained little from their period in office, and 1199SEIU had won a substantial victory.

In recent years 1199SEIU has reaped the benefits of a close alliance with outgoing New York Mayor Bill de Blasio (D) and the bold progressives who accompanied de Blasio into high city offices. But the union’s influence stretches far beyond the borders of the Empire State, and that influence is best demonstrated in one person: former 1199SEIU political director Patrick Gaspard.

An operative for a number of New York City Democrats including Mayor Dinkins, Gaspard was brought on to head 1199’s political operations in the late 1990s. When Barack Obama ran for president, he brought Gaspard into his campaign’s inner circle, and after the election Gaspard joined the Obama White House political shop. With Obama’s re-election upcoming, Gaspard was shuffled over to be executive director of the Democratic National Committee. After re-election was secured, President Obama named Gaspard ambassador to South Africa. When the Obama administration’s mandate expired, he returned home to head George Soros’s Open Society Foundations advocacy-philanthropic empire. When the Biden administration poached Neera Tanden from the Democratic establishment–aligned think tank Center for American Progress (CAP), Gaspard moved over to lead CAP.

From the union to the highest reaches of the Democratic Party machine. It’s not only Gaspard’s story or Johnny Doc’s story; it’s a common story. Those concerned by the direction of the country should take heed.